The EU’s recent foreign policy record has been poor, with Europe as a whole losing ground in the global system. Why are European politicians and civil servants unwilling to do more to improve performance?

The EU’s recent foreign policy record has been poor, with Europe as a whole losing ground in the global system. Why are European politicians and civil servants unwilling to do more to improve performance?

The European Council on Foreign Relations recently launched a Scorecard that evaluates the EU’s influence and role in over eighty foreign policy areas, which then boil down into six key themes. Karen E.Smith finds the exercise useful in highlighting issues for concern, and in perhaps persuading European leaders to engage with foreign policy failings.

The last year has been a turbulent one for European foreign policy. The Euro crisis has seen the outside world’s perception of the EU’s economic stability take a significant hit. The Arab Spring and subsequent conflicts in Libyaand Syria have tested the EU’s foreign policy mettle in its immediate Mediterranean ‘neighbourhood’.

How has the EU responded to these challenges? Earlier this month the European Council on Foreign Relations (ECFR) launched its European Foreign Policy Scorecard for 2012 at the LSE. This is a massive and systematic exercise, evaluating eighty different EU foreign policy areas, boiled down into the six key themes that are shown in the table below. The ECFR also assigns a numerical mark out of 20 to the EU’s performance, and translates that into a letter grade.

Table 1 – European performance on the six issues in 2011

Broadly speaking, this year’s marks show that the EU ‘could do better’ in virtually all the areas assessed. It gains its highest overall mark of B on multilateral issues, and its lowest mark of C on relations with China. Everywhere else the performance is at a C+ level. Furthermore there has not been much improvement since the last Scorecard exercise in 2010 – the picture is essentially very little changed, despite the intervening progress in setting up the European External Action Service (under Catherine Ashton).

This year the Scorecard includes an additional chapter, which explores the positions of the EU member states on some key policy areas (covering 30 of the 80 areas assessed at the European level). Here the Scorecard categorises the countries inside the EU as being ‘slackers’, ‘supporters’ or ‘leaders’ on the set of issues. The table below shows the results, with Germany leading the leader pack, followed by the UK, France and Scandinavian countries, but Italy and the Netherlands well down the field. Bringing up the rear is Greece, with Spain,  Belgium, Romania and Hungary showing signs of internal troubles preoccupying their governments and leaders. 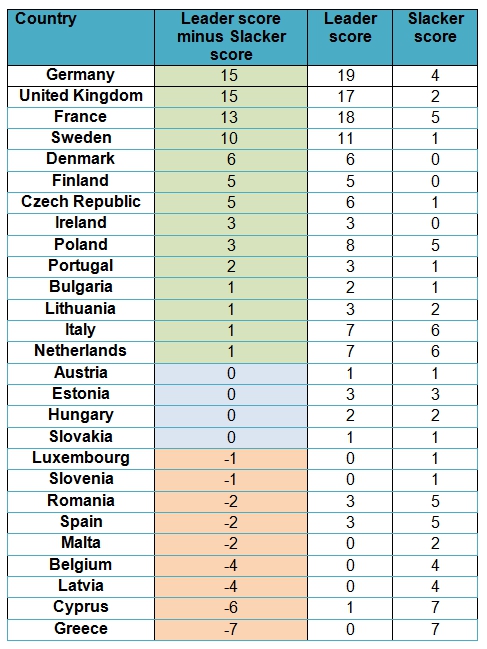 I’m sure that all the EU member states will raise objections to being labelled ‘slackers’ in any policy area, but the solution lies in the countries’ own hands, to be more active next year and avoid being categorised as slackers.

What does the Scorecard tell us?

Of course with any exercise like this, issues are bound to arise about whether it is too simplistic, or whether the categorizations stand up to closer analysis. I deal with such issues in the last section below on Methods issues. Those (few?) of us who care about EU foreign policy are always assessing developments. We all certainly have our own views of how well or poorly the EU has performed in this or that crisis, or on this or that issue. All that ECFR has tried to do is to ‘systematise’ judgments about the EU’s performance. So let’s accept for now that the Scorecard offers researchers valuable assessments of what the EU has been doing in any given year. Now that comparisons can be made also over time, this value increases.

The real question though is – so what? Does the Scorecard merely record the EU’s growing irrelevance as an international actor? Is anyone in Brussels or in the various capitals of the 27 EU member states really listening? And if they are listening, are they concerned? And if they are concerned, is there anything they are willing to do to improve the EU’s performance? On this last point, I have my doubts.

The nub of the matter, it seems to me, is to determine why the EU has recently been performing badly, both in general and in particular policy areas? Is this the fault

Frankly, I think all the member states are implicated in the EU’s dwindling role, as EU member states ‘renationalise’ their foreign policies – a trend that the ECFR notes in the Scorecard. But then, why are countries doing so? And why now? Is this only because of the financial crisis, or is there a deeper malaise? The trends also goes against various theoretical approaches suggesting that the EU member states should be going the other way. They are supposed to be ‘Europeanising’ to an ever greater extent

Certainly the Scorecard suggests that we are not seeing signs of Europeanization – so if not, why not? The nature of the Scorecard is such that it cannot provide answers to such questions – it can merely document the performance of the EU year by year. But if the Scorecard is to have an impact on actual EU performance, then an analysis of the reasons for why the Union is performing badly (or well) needs to be undertaken as well.

Finally, let’s turn to whether we should take the Scorecard seriously or not. The ECFR has highlighted the pitfalls of trying to assess EU foreign policies in the ‘methodology’ chapter of the earlier 2010 scorecard. This discussion provides a very good survey of the difficulties and challenges in trying to evaluate EU foreign policy in a systematic way – exploring what counts as a ‘success’, how can we measure unity or use of resources or effectiveness, and so on. I know that the Scorecard has been criticised by some commentators for being too simplistic, but I think we cannot deny some value-added in trying to be systematic.

Now for my own three quibbles. The first is that the grading system is such that the EU can hardly fail. ‘Fail’ requires a score of 0 out of 20. And a ‘D-‘ letter grade can only be achieved by scoring 1 out of 20. It seems to me that this is a pretty easy scoring system – one that no school or university, certainly, would support. Perhaps the ECFR decided that if it set the bar for ‘fail’ any higher the EU might receive more Fs?

My second quibble is with the scoring on the new theme, which is the Middle East and North Africa. Here the ECFR’s scores do not appear to coincide even with the ECFR’s own commentary in the Scorecard document. For example, the EU earns a B+ for its ‘policy’ on the Libyan uprising, despite the considerable lack of unity among member states on Libya. The commentary even implies that ‘Europe’ (and particularly those European states that contributed to the NATO military intervention) earned the B+, not the EU. The EU’s policies towards North Africa and the Middle East, both before the ‘Arab Spring’ and after it, have been criticised (rightly and heavily|) by commentators and scholars across Europe and the Mediterranean region. These numerous criticisms are not adequately reflected in the Scorecard.

My third, more minor quibble is that ECFR gives the EU a relatively strong grade of B+ for its performance in advancing human rights at the UN. The EU has been quite united here, but this grade does not take into account the very limited impact the EU had on the ‘review’ of the Human Rights Council in 2011 – which essentially resulted in little change to that institution.

The European Council on Foreign Relations launched its 2012 European Foreign Policy Scorecard at the LSE in early February, at an event co-sponsored by the LSE’s European Institute and European Foreign Policy Unit. Mark Leonard, ECFR Director, and Justin Väisse, co-author of the Scorecard, presented the second of these annual assessments of EU foreign policy, with comments from Thomas Valacek of the Centre for European Reform and Karen E. Smith.

Professor Karen E.Smith – LSE International Relations Department
Karen E Smith is a Professor in International Relations and Director of the European Foreign Policy Unit at the London School of Economics. Her research interests have centre on the international relations of the European Union, focusing on the EU’s pursuit of so-called ‘ethical’ foreign policy goals such as promoting human rights and democracy. Her latest books are Genocide and the Europeans (Cambridge University Press, 2010) and European Union foreign policy in a changing world (Polity, 2008).

The EU needs to adopt a more pragmatic policy towards Belarus based on cooperation rather than sanctions.