Glen O’Hara finds The Labour Party in Britain and Norway to be an excellent and bracing study of two nations and two parties struggling with the implications of a restive mass democracy between the World Wars. David Redvaldsen’s work is a most welcome contribution to the literature. 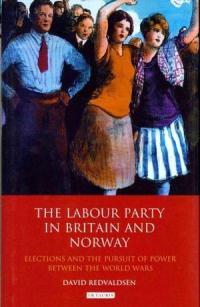 The Labour Party in Britain and Norway: Elections and the Pursuit of Power Between the World Wars. David Redvaldsen. IB Tauris. 2011. 206 pages.

Britain and Norway are so alike, and yet so fundamentally different, that it is a shock that fewer in-depth studies of their relationship and their different paths to modernity have not appeared. Both ‘northern’ members of NATO and Arctic powers; both long-standing maritime and fishing nations; both beneficiaries of North Sea oil (though the UK is now importing oil from Norway): the list could go on and on. The two countries’ very close and warm political relationship never hid the fact that the two peoples remained exotic to one another. British travel writers and politicians alike saw the Norwegians as proud, ‘clean’, ordered and somewhat daunting; Norwegians, in their turn, were often bemused by Britons’ chaotic – if sporadically dynamic – economy and society. Still, only Tony Insall’s 2010 study of Haakon Lie, Denis Healey and the Making of an Anglo-Norwegian Special Relationship, 1945-51, is readily available in English to pursue the theme in any depth.

It is for this reason that David Redvaldsen’s Labour Party in Britain and Norway is so timely, and so welcome. He takes the experiences of British Labour and the Norwegian Det Norske Arbeiderpartiet, or DNA, and uses both to illuminate the other. In so doing, he demolishes some of the perhaps old-fashioned arguments about Labour’s potential electoral advance in the UK. Previous authors have often argued that, since Britain had no peasantry to speak of, no ‘Red-Green’ alliance between workers and agrarians could emerge. Redvaldsen demonstrates that, on the contrary, the DNA’s need to appeal in countryside constituencies, the country’s three-year electoral cycle, and the movement’s dense alliances after its re-emergence from the Comintern were all much more powerful determinants of the party’s success than were the apparently ‘deeper’ structure of Norwegian state and society. Above all, the DNA were not in power when the crisis hit, having only held power for a few days in 1928. They could not be blamed for the crisis, unlike Ramsay MacDonald’s divided administration; they could formulate new ideas in the relative luxury of opposition; and they did not split. Hence their later victory in 1933 and, to some extent, their dominance of Norwegian politics thereafter.

Several individual elements do give this reader, at least, some pause. A very few elements in the book, for instance at the points when he reflects on British Labour’s relatively narrow focus on its own press, would benefit from increased familiarity with recent historiographical innovations. In this case, recent books on the inter-war press by Laura Beers has emphasised the modernity of Labour’s public relations appeal to the media in general, rather than to specific Socialist periodicals.

Redvaldsen is also perhaps slightly too quick, especially in his introductory first chapter, to write off the possibilities of what he terms ‘transfer’ history – the movement of ideas, concepts and even individual policies between state polities in twentieth century Western Europe. Key texts in this field, for instance Daniel T. Rodgers’ 1998 Atlantic Crossings: Social Politics in a Progressive Age and Patricia Clavin’s work on the League of Nations, are very clear that ideas flowed around the developed world very quickly, even in the chaotic inter-war period, and some of the radical specificity and prosopography (defined by the great conservative historian Lewis Namier as ‘finding out who the guys were’) can be lost if we decline to trace out these links. The two parties, to be sure, were in much less frequent communication than they were to be after 1945, partly because the Norwegian party seemed too left-wing a partner for a British Labour movement desperate to seem ‘respectable’ and ‘responsible’. But their analyses came more closely into sync as the 1930s wore on, and it would have been interesting to tease out the implications and results of that process. Did the British come to see the Norwegians in a new and more positive light? Such questions remain frustratingly elusive.

All that said, this is an excellent and bracing study of two nations and two parties struggling with the implications of a restive mass democracy, set against the headwinds of low growth and conservative austerity over the medium term. This reviewer was left wanting more, which must say a great deal about the book’s revivifying powers – more about the post-war situation, when Insall’s work has shown that Labour and the DNA were in contact

The book deals with both states in a proper comparative framework, rather than (as the author gently disapproves) bolting some secondary literature searches onto a proper archival study of one country or region and not the other under consideration. And there is a powerful and oft-ignored case living and breathing under the surface of this academic monograph. Redvaldsen’s case really amounts to putting the case for chance and contingency in political life – for if British Labour had not been in power during the economic crisis of 1929-31, there is little doubt that the party would have done much better than it did up to the outbreak of war in 1940. It would have been united; it would undoubtedly have seized on many of the radical-liberal or Keynesian ideas than swirling around all parties, as Daniel Ritschel and others have shown;

The most vivid implication of Redvaldsen’s work is that new politics can and might be forged all the time – that there are few ‘inevitabilities’ or ‘structural imbalances’ that explain our public life, beyond the political alliances and strategies that leaders and followers adopt. At a time when the Left as a whole faces renewed adversity in austerity, that may be a comforting thought.

Glen O’Hara is Reader in the History of Public Policy at Oxford Brookes University. He is the author or editor of several books about modern British history, including From Dreams to Disillusionment: British Economic and Social Planning in the 1960s (2007), (with Tom Crook), Statistics and the Public Sphere: Numbers and the People in Modern Britain, c.1800-2000 (2011), and Governing Post-War Britain: The Paradoxes of Progress (2012). He blogs at publicpolicypast.blogspot.com and can be followed on Twitter as @gsoh31.

Anglo-Dutch Cooperation continues to be important, especially in unlocking the full potential of the EU’s single market