EU budget negotiations continue against a backdrop of austerity. But they are still in need of reform to produce a more efficient financial framework.

EU budget negotiations continue against a backdrop of austerity. But they are still in need of reform to produce a more efficient financial framework.

The on-going negotiation of the EU’s budget is heavily constrained by how the decision process takes place, with member states focusing on narrowly defined national interests, rather than on securing a better budget for Europe. Sara Hagemann argues that how the EU budget is negotiated must be reformed altogether if the EU is to address the new challenges it is facing.

European governments now have their attention focused on securing a future for the Eurozone, and on questions of how to restructure and ensure a more extensive and credible governance system. It is against this background that the Danish EU presidency is currently seeking to make progress with the next Multiannual Financial Framework (known to most as ‘the EU budget’). While the EU budget is rather inconsequential in its size and impact in the wider economic context, the current budget negotiations for the 2013–2020 period are of great political importance: a reformed and ‘efficient’ budget agreed by all 27 governments would reflect ambition, unison and credibility at a time when such signals are much needed. It could also be a powerful tool to signal real ambitions for economic growth policies. However, judging from the economic context, political rhetoric and the legal rules, any ambition for a more efficient financial framework may – once again – be left unsatisfied.

But significant reform is necessary, as the EU budget must address many new challenges. One of the most crucial questions is whether the process by which the EU budget is negotiated can be reformed. This goes beyond the simple legal decision-making procedure.

The last rounds of budget negotiations back in 2005 ended with several governments explicitly criticising the outcome. Negotiators voiced relief that a deal had been possible at all, but indicated general dissatisfaction that neither governments’ individual interests nor overall policy ambitions for the EU were properly reflected in the agreed budget allocations. Necessary reform of several areas was stalled due to the need to reach a consensus agreement.

The current negotiations, in the context of the political and economic difficulties faced by the governments, are no doubt even more complicated. The EU has 27 governments around the table, each with veto powers and strong preferences for budget items of particular importance to their domestic interests. In parallel, there is an increasing pressure to meet new and different priorities not currently reflected in the budget and, moreover, the leftover problems from the last negotiation rounds are simply impossible to ignore. 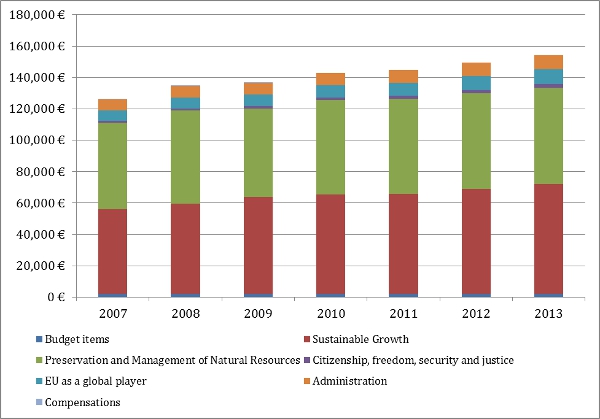 The decision process for agreeing an EU budget has resulted in a strong bias towards maintaining the status quo, mainly influenced by the dominance of narrowly defined national interests in the negotiations, with the existing budget seen as the benchmark against which the outcome is compared. Though, across national borders the budget is also not equally representative of all groups in society. For example, the interests of students who are studying in other EU countries as part of EU funded exchange programs are unlikely to receive representation equal to the interests of farmers.

Member state representatives are also often constrained by internal decision-making processes prior to their presentation of country positions at the EU level, which in effect constrains the political mandate to negotiate at the bargaining table in Brussels. This is especially true in Member States characterized by different levels of governance with each having significant influence on budgetary negotiations. In the current set-up, the demands on member state negotiators are often very high in terms of bringing back evidence of success to their parliaments and constituencies. The measure of success is often reduced to the best possible monetary deal in terms of net contributions (so-called juste retour), rather than focusing on the wider policy priorities. The pressure not to compromise can be especially strong for the larger member states which contribute significantly to the budget. In effect, member states turn the negotiations into a zero-sum financial game, where any expenditure allocated to a specific country must reduce another’s and where any additional funding for one policy area must reduce the funding in others.

These already skewed negotiations also lead to a general undervaluation of European public goods, since the wider EU common good is incompletely represented by the limited influence of the Commission and the European Parliament in the negotiations. Of course, political choice explains the fact that EU budget negotiations are characterized purely by intergovernmental bargaining, but it is unlikely that this choice will lead to the effective identification of which EU public goods and policy priorities should be financed and delivered at the EU level.  In addition, there is a prevailing tendency to focus only on areas where the EU already has competencies and expenditure, rather than considering wider priorities. This creates difficulties in dealing with new priorities, an issue that is aggravated by the current somewhat rigid budget structure, which fixes expenditure in budgetary items.

This is where timing and sequencing of budget negotiations become crucial: Negotiating expenditure, revenue and strategic priorities behind closed doors as a ‘package’ almost guarantees that most attention is focused on net contributions. Member states have a significant incentive to pre-empt the negotiation by reaching agreement on significant expenditure areas before the negotiations, further limiting the responsiveness of the budget to changing policy priorities. The focus on juste retour also has a negative impact on the effectiveness of spending. To try to determine ex ante how much each country will receive in expenditure is to tie spending to certain policy areas, regardless of changing circumstances and needs, or how the money is spent. While funding can be made conditional on results, this entails a heavy administrative burden. In a modern, interdependent economy, earmarking expenditure for countries or regions is also increasingly meaningless, with companies and individuals operating across borders and benefiting from spending elsewhere.

Finally, there is little connection between the budget process and political processes, either at national or the European level. With the limited role of both the Commission and the European Parliament, and no synchronicity of the budgetary cycle with election or appointment cycles, there is no real political responsibility, legitimacy or accountability for the budget at the EU level. The European Parliament and the Commission should not have to deliver a new EU budget in their first days in office, nor towards the end of their term. The general lack of transparency in the process also means that the relationship of the final outcome to the expressed policy priorities of the European Commission tends to be tenuous.

But significant reform is necessary, as the EU budget must address many new challenges. One of the most crucial questions is whether the whole process can be reformed, and the informal agreements, negotiation tactics, habits and commonly understood principles as well as legal processes, now all need to be assessed.

In order for both member states and the EU as a whole to win in the long run, ‘red lines’ and pre-negotiated agreements should not be allowed to determine the outcome of a next budgetary agreement. In the future, one way of achieving this could be through a more explicit separation of the formulation of long-term strategies from the detailed haggling over specific budget items. Even a complete decoupling of negotiations about financing from negotiations over expenditure is worth considering. This might prevent a situation where the governments have pre-determined positions and a narrow focus on juste retour. The national-level formulation of country positions and priorities must also be addressed in order to achieve a more satisfactory and efficient outcome, and this cannot be done on the initiative of the Commission.

Decisions concerning the EU budget have consequences not only for the detailed spending and financing of each budgetary heading, but also for the EU’s long-term political and economic strategies. They have knock-on effects for current and future social, economic and environmental policies which may not (yet?) be directly reflected in this limited budgetary framework. For these reasons, it is crucial that the EU has a decision-making mechanism which can produce a more rational, priority-driven budget.

Sara Hagemann – LSE European Institute
Sara Hagemann is Lecturer in EU Politics at the LSE’s European Institute. Sara joined LSE in September 2009 after having worked as Policy Analyst at the European Policy Centre in Brussels. Before then Sara was a Research Fellow at Centre for European Policy Studies, also in Brussels, and worked in the Danish Ministry of Foreign Affairs. Sara received her PhD in Political Science (EU Politics) from LSE’s Government Department in 2006.

Hungary is sleepwalking into an authoritarian state. But the European Union is limited in the pressure it is able to exert.