In the midst of the European financial and economic crisis, Estonia fundamentally reformed its health care system. Triin Habicht describes which changes were introduced. She argues that the Estonian reform could serve as a role model for many countries in the European Union.

Between 2001 and 2007, Estonia had one of the fastest growing economies in Europe with annual growth rates ranging between 6.7 and 10.3 per cent.  The economic crisis in 2008 hit the country hard, mainly due to a severe slump in investment and consumption following the near collapse of the country’s real estate market. In 2008, the economy contracted by nearly 4 per cent and this negative growth continued in 2009 with a more drastic reduction of over 14 per cent.  Since then, following large fiscal cuts and a surge in exports, the economic situation has improved markedly, with GDP returning to positive growth of 2.3% in 2010 and 8% in 2011. In the midst of this economic turmoil, the government’s main goal was to fulfil the Eurozone criteria that were a precondition for Estonia adopting the Euro in January 2011.

In this context, the main decisions affecting the health sector in Estonia have been to restructure health expenditure in line with reduced budgets while simultaneously having the least possible effect on the financing of core health care services.  At the beginning of the economic crisis, the national health insurance system was in a better position compared to other public sectors as the Estonian Health Insurance Fund (EHIF) had collected sufficient reserves during previous years of rapid growth.

EHIF has mandatory legal and risk reserves to ensure solvency. The legal reserve, 6 per cent of EHIF’s budget, decreases risk from macroeconomic changes and may be used only after a government order. The risk reserve, 2 per cent of the budget, minimizes risks arising from health insurance obligations and can be used after a decision of the EHIF’s supervisory board. In addition to the reserves, EHIF had retained about 150 million Euros (almost a quarter of the annual budget) as of the end of 2011, mostly the result of previous years’ high actual revenues compared to those anticipated. In 2008, before the crisis hit, the EHIF had over 4 times more reserves as was the required level (see figure above). These accumulated funds enabled to smooth the impact of decreased revenues in 2009 (EHIF revenues decreased by 11% in 2009 compared to 2008). 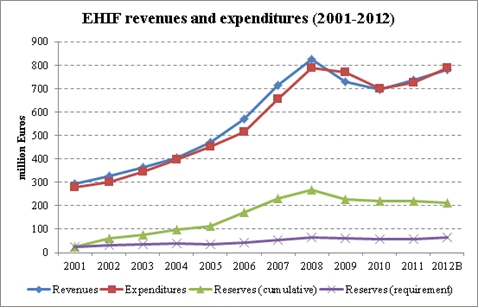 Even though there would have been enough reserves to fill the gap between revenues and expenditures in 2009 without making any changes to benefits, solution was not pursued, as in the longer term this would have resulted in debt for the health insurance system. Therefore, a number of expenditure cuts were introduced in parallel to the changes proposed for health system that had already been planned prior to the crisis.

The direct response to the economic crisis by the EHIF board was to target payments to health care providers. In 2009, they reduced the price of health services  by 6 per cent. The objective was to balance the health insurance budget without diminishing access to care. Before the crises, health service expenditures (also prices) increased very rapidly and therefore the 6 per cent cut was not considered a big economic shock for providers. In 2011, the cut was reduced and the prices of health services were 5 per cent lower compared to pre-crisis period with the exception of primary care where the reduction was lower (3 per cent) to ensure relatively more funds to flow to family medicine based care. In the beginning of 2012 the price reduction was abolished and pre-crisis price level has been restored at all levels of care.

In 2010, a 15 per cent co-insurance rate for nursing inpatient care was introduced. This plan was proposed before the financial crisis as a means of including patients and municipalities in the co-financing of nursing care, but it was not possible to implement it until after the crisis because it was unpopular.

The scope of health benefits coverage has been the major area affected, with the EHIF reducing the benefits package in two ways. Firstly, the system for temporary sick leave benefits (due to historical reasons the health insurance in Estonia covers also the short term sick leave as open ended responsibility) was reformed and responsibilities shared with patients and employers. Starting July 2009, no benefit is paid during the first three days of sickness or injury (previously only the first day was excluded), the employer pays the benefit from the fourth to eighth day (this is a new cost-sharing mechanism as the employer did not participate previously) and the EHIF starts to pay the benefit from the ninth day (previously it paid from the second day). In addition, the rate of sickness benefit was reduced from 80 per cent to 70 per cent of the insured person’s income. The total impact of this change on EHIF’s budget is about 10 per cent savings and this enabled to avoid radical changes in health care delivery.

Secondly, before 2009 all insured persons aged 19 years and over could apply for the dental care benefit of €19.18, but from 2009, only insured persons over 63 years of age and persons eligible for a work incapacity pension or an old-age pension retained this right. This change had rather marginal effect on total budget compared to sick leave benefits reform.

Services also have been subject to some rationing through increases in official waiting times: maximum waiting times for outpatient specialists’ visits increased in March 2009 from four to six weeks. At the same time all other types of waiting times were kept at pre-crisis level.

High out of pocket spending on drugs has been a big concern already before the crisis. Taking the opportunity to implement policies that already had been foreshadowed, in March 2010 Ministry of Social Affairs (MOSA) amended the ministerial decree on drug prescriptions to support active ingredient-based prescribing and dispensing. The amendment requires pharmacies to provide patients with the drug with the lowest level of cost sharing and to note if patients refuse cheaper alternatives. In September 2010 the EHIF launched an annual generic drug promotion campaign on television and billboards. In another initiative in 2010, a new e-prescription system was launched, which has been replacing paper prescribing. The new system makes active ingredient-based prescribing easier. As a result the patient out of pocket payment share of EHIF reimbursed drugs has been fallen from 38.5 per cent in 2008 to 34.5 per cent in 2011.

Now, in 2012, it can be said that the EHIF has been recovered from the crisis rather successfully using crisis as a window of opportunity to introduce reforms that had been planned for a long time. Most EHIF reserves have remained unused which enables it to cope with potential future relapses in economy in short term. In this regard, the reform of the Estonian health care system is a role model for Europe. However, the crisis highlighted clearly the limits of heavy reliance on payroll taxes to finance health care as the EHIF’s revenues feel due to more people becoming economically inactive because of rising unemployment.

A longer version of this article appeared in Eurohealth, a quarterly publication produced by the European Observatory on Health Systems and Policies at LSE Health.
.