While an economy is always ’embedded’ in society, the relationship between the two is undergoing profound changes in Europe, resulting in widespread instability, emphasised by the current crisis. This book analyzes these changes, and in particular the pressures of intensifying international competition, globalization and financialization within Europe. Madalina Dobrescu finds that the most relevant chapters focus on the place of economists after the crisis. 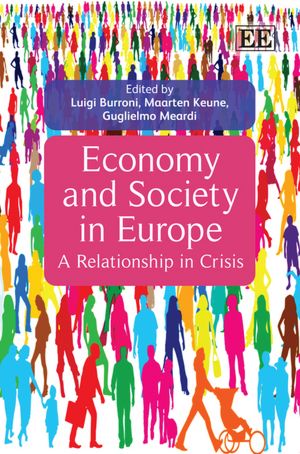 For those with an interest in the integrated study of economy and society, Colin Crouch is a familiar presence in academic debates. With an impressive career spanning over three decades, he has published extensively within the fields of comparative European sociology, industrial relations and economic sociology. In acknowledgement of his commitment to rethinking the relationship between economy and society, the present volume gathers contributions of scholars who have worked with him as doctoral students, research assistants or colleagues, drawing inspiration from his polymathic inclinations and taking further his sensitive yet rigorous research.

The book is firmly grounded in the study of contemporary capitalism, within which it sets out to investigate the dynamic interaction between social institutions and economic processes in Europe. This relationship is mapped across a variety of institutional arenas, ranging from the European integration process, industrial relations systems and labour market, to education systems and the role of the family, to show how national systems grounded in a plurality of traditions produce capitalist diversity.

In the contemporary European landscape, the EU integration process is one of the arenas where the tension between the economic and social dimensions is often of a frictional nature, as Keune shows in Chapter 2. Despite a certain advancement in the development of European social policies, the social dimension remains frail and unable to limit the role of the market. Employment policies are a case in point for not embellishing the role of supranational institutions such as the EU in the realm of social policies. In Chapter 6, Meardi finds that, despite growing trends towards the Europeanisation of employment policies, state traditions and styles are still very much discernible. Interestingly, these give rise to national variations which are reinforced through contestation and investigation.

Underscoring the complex and seldom straightforward relationship between the economic, social and political realms, Hemerijck shows in Chapter 3 how the evolution of the welfare state in the 20th century has been shaped by distinctive combinations of socioeconomic conditions, intellectual developments and political processes of contestation and compromise. These developments, it is argued, cast a disquieting shadow over claims that the political and economic arenas are “tied together in any straightforward ‘functional’ or ‘materialist’ manner”. Moving the spotlight on a micro-locus of socioeconomic interaction, Chapter 4  looks at the factors which have contributed to the emergence of a new gender equality balance. It finds that the roles of men and women in the labour market significantly impact on their roles within the family, thus emphasising an interesting but largely unexplored causal mechanism which investigates the way in which economic processes shape social institutions rather than the reverse.

The financial crisis that has engulfed the world economy has considerably strained both economies and societies. On one hand, it has discredited the idea of a self-regulating market. On the other hand, it has eroded the foundations of social institutions and policies: welfare states are threatened by the need to maintain economic stability in the face of growing fiscal deficits and public debt and families face cut downs on public services making it more difficult for them to reconcile paid work and child and elderly care. The European social dimension is too weak to absorb the shock inflicted by the economic crisis on the society.

In exploring the economy-society nexus, the book also addresses the state of economics as an academic discipline in the context of the recent economic meltdown. This is of fundamental importance because it sheds light on the very puzzle that informs this research endeavour in the first place: how can the relationship between economy and society be understood? But at a more profound level it helps us understand why and how this issue has been constructed into a puzzle. Why is it so difficult to understand the dynamic interaction between these spheres of human activity?

Part of the answer lies in the relationship between the academic disciplines which explore these spheres – economics and other social sciences. The former’s interconnectedness with the science of mathematics has enabled it to situate itself on a superior intellectual position and claim monopoly over markets, while the rest of the social sciences had been relegated to the margins of capitalist markets. The implications of this artificial divide have been far-reaching: economics has evolved into a unified , coherent discipline, much like a ‘monocrop economy’, insulating itself from other disciplines and thus becoming rather unsuited to address change. This was painfully evident in the powerless attempts by economists to make sense of the recent financial crisis. Their eagerness to turn to Keynesianism rather that to other economic approaches or to insights from other fields testifies not to the explanatory power of Keynesian thinking but to what Crouch labels as ‘cognitive laziness’: rather than appealing to distant perspectives such as institutional approaches, which would have been better equipped to explain the causal mechanisms of the crisis, but of which mainstream economics had little understanding, economists preferred to embrace the explanation which was closest to their previously held views and this proved to be Keynesianism.

It is then a sine qua non condition that economics and other social sciences should engage in fruitful dialogue if we are to enhance our understanding of the relationship between economy and society. In this respect the present book is a welcome contribution to this conversation. Nonetheless, more unbelievers must be brought into the debate rather that merely the already converted economic sociologists. Only then will the threads between economy and society begin to disentangle.