Turnout in elections to the European Parliament has been consistently lower than the turnout in national elections. Peter Grand and Guido Tiemann analyse the factors which keep EU citizens away from the polls by assessing data from the recent 2009 European Parliament election survey. They conclude that many EU citizens find European elections insufficiently rewarding and that the perceived benefits of voting are often outweighed by the costs.

Social scientists have been able to observe a persistent empirical regularity regarding elections to the European parliament (EP) since the first elections were held in 1979, namely that turnout is almost always lower in comparison to the most recent national elections. Voter turnout at European elections differs significantly across the various EU member states with an all-time low of 24 per cent in the United Kingdom in 1999 and Luxembourg and Belgium presenting the highest average turnout of approximately 90 per cent (the latter two countries have compulsory voting).

Thus, it comes as no surprise that political scientists are interested in explaining turnout differentials between these two types of elections as well as differences between member states. What drives citizens to abstain from elections in general and especially from elections to the EP?

How to explain low turnout at EP elections?

The so-called `second-order’-hypothesis states that national elections are first-order elections because the results directly affect government formation. In the context of EP elections there is `less at stake’ because no government emerges from the electoral process and the EP still remains the weaker partner compared to the Council of Ministers in the legislative decision-making process. Thus, political scientists speak of `second-order’ elections. Obviously it is not very satisfying if we can only make the conclusion that voters abstain because EP elections are not as important as national ones. What causes voter abstention at EP elections? Does the perception of political parties explain turnout? It is exactly the latter question we ask in order to grasp the empirical phenomenon of recurrent low voter turnout at EP elections.

We use a theoretical concept developed in theUScontext, namely the concept of indifference versus alienation. These concepts stem from rational choice theory, which assumes that voters get a benefit from voting, e.g. a party in government enacting a preferred policy. The voter also has to bear some costs for casting a ballot by collecting information about the positions of political parties or by voting instead of lying in the sun. Consequently, a citizen only votes if the benefits exceed the costs of voting. A citizen is indifferent if she cannot decide whom to vote for because two or more parties yield the same benefit. Similarly, a citizen is alienated if all competing parties yield a benefit lower than the individual voting costs. The `less at stake’-argument is especially important because it implies that voters generally receive lower benefits from voting in EP elections and, thus, it influences indifference and alienation differently. The same holds for increased voting costs due to the generally lower media coverage of EP elections compared to national elections. Decreasing voting benefits can cause only a higher share of alienated individuals because for being indifferent only differences in utilities matter. Increasing voting costs also increase the likelihood of an individual feeling alienated because even the most preferred party yields a benefit that is too low to justify voting. Thus, we assume that alienation is the driving force behind voter abstention at EP elections.

We used data from the recent 2009 EP election survey conducted in the 27 member states to assess how indifference and alienation may affect voter behaviour. The respondents were also asked how interested they were in the 2009 EP elections. We used this question to assess the different individual perceptions of the importance of this election, i.e. we measured the individual degree of `less at stake’. We then employed statistical methods to calculate the average probability of voting at the 2009 EP elections. The results, shown in Figure 1, are striking; alienation indeed has a very strong effect on turnout whereas we cannot say anything meaningful about indifference. 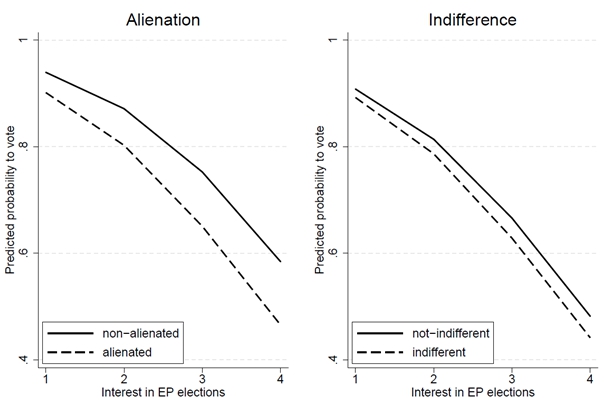 This finding is especially important with regard to the ongoing discussion about a democratic deficit in the EU. The democratic legitimacy of the political system of the EU depends not only on the institutional setup and/or effectiveness and efficiency of political output, but also to some part on the ‘transmission belt’ for political preferences, i.e. the ability of political parties to adequately connect the preferences of their (potential) electorate with the political processes in the EU. Our results also emphasize the possibility that EU citizens have more sophisticated preferences regarding European integration than most politicians may assume!

Peter Grand is a researcher at the Department of Political Science at the Vienna Institute for Advanced Studies. His research interests include European Integration, Electoral Behaviour, and Party Politics.

Guido Tiemann is an Assistant Professor at the Department of Political Science, Institute for Advanced Studies in Vienna. Prior to joining the department, he was a Postdoctoral Fellow at the Max Planck Institute for the Study of  Societies in Cologne  and at the European University Viadrina, Frankfurt/ Oder). His fields of specialization are Political Methodology, Electoral Systems, Party  Systems, Electoral Behaviour, and European Integration.

The EU’s Nobel Prize means that it must do even more to overcome its current crises, and increase its role as a force for peace and prosperity.

Will ‘Eurosis’ condemn Britain to be an outsider looking in?