Recent years have seen declining wage costs in the crisis-stricken countries of Spain, Ireland, Greece and Portugal. Ronald Janssen argues that this trend has not delivered export led growth, as predicted by mainstream economic thinking, and that further attempts to drive wages down and institute structural reforms may well make a future recovery impossible.

At the end of July, the Conference Board (a business sector driven research association based in New York) published a study pointing out that several crisis ridden countries in Europe are now recording significant cuts in wage costs. In their view, these falling unit wage costs are rebalancing competitive positions between the core and the periphery of the Euro Area and could be the key to a more sustainable recovery. Despite the chaos hitting the single currency, there would be light at the end of the tunnel for Europe.

Unit wage costs are indeed going down in Spain, Ireland, Greece and Portugal. In the case of Greece, the downwards adjustment is very marked with unit wage costs having fallen by around 15% since the 2009 peak. Unfortunately, however, improved wage competitiveness is failing to show up in growth, investment and, in some cases, not even export performance.

On the issue of exports, Greece provides a stark example:  despite its 15% drop in unit wage costs, and despite an average wage in manufacturing that is substantially lower in comparison with Germany, Italy and Spain, Greek exports have been stagnating since the onset of the crisis and substantially falling when compared with the level of exports before the 2009 crisis (see Figure 1 below). In fact, in the five year period before the 2008 crisis, a period in which wage costs rose substantially, Greek exports were actually quite robust, loosely following the dynamics of world trade. This contrasts with the period since 2009 where falling wage costs are not capable of triggering export revival. Empirically, for Greece, the correlation between wage costs and export performance is actually the opposite of what one would expect when adhering to mainstream economic thinking. 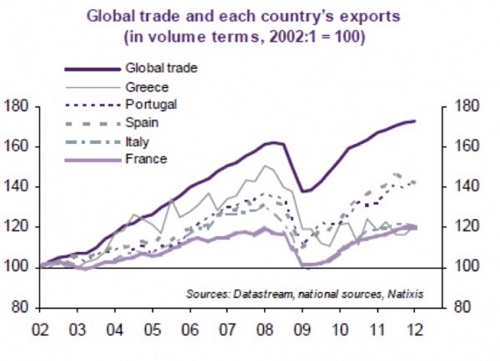 So what about Spain and Portugal? For these countries, the graph above does show a revival of exports after the 2009 crisis and even a substantial one. Export revival, however, is not enough to prevent the collapse in domestic demand that accompanies the cuts in public budgets and in real wages. The net outcome of these two conflicting powers (export revival/domestic demand contraction) is still recessionary. This is also why business investment is not picking up and is even going down in Greece and Portugal (see Figure 2), and this despite rising profit rates. Greece is again the dismal champion with profits as a share of GDP (12%) being three times higher as business investment (4% of GDP). 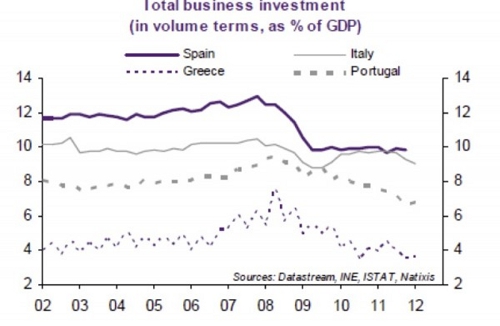 Faced with this glaring lack of positive results, mainstream economists will undoubtedly argue that it takes time for structural reforms to deliver results: market confidence and (foreign) investment will only gradually return to these distressed economies. The problem with this line of thinking is that if an economy is pushed so deeply into negative territory, it may make a future recovery impossible: a medicine that manages to kill the patient kills all further hope as well.

Indeed, there are numerous ‘hysteresis’ mechanisms that work to transform short or medium term depression into permanent and structural regression, from high persistent unemployment becoming structural, over  losing skilled workers due to mass emigration, to a collapse of the productive  basis that is so important for the future of the economy, both in terms of tangibles (public investment in infrastructure and networks) and intangibles (education, health systems, social dialogue, trust and peace).

Meanwhile, the mainstream’s economic medicine of devaluing wages in the periphery is not leaving the Euro Area’s core unscarred either. The recession, which was already firmly present in the periphery over the past quarters, has now reached the core as well. Most recent PMI’s (purchasing manager indexes) for manufacturing are as bad for Germany and France as they are for Italy, with latest PMI- indices for all of these countries at around a value of 43 (a level of 50 corresponds with a stable level of activity), manufacturing activity across the entire area  is falling. This should not come as a big surprise: the periphery’s economy is, to a certain degree, the core’s export market so if the former contracts, the latter feel its impact. Moreover, the core is also pursuing fiscal austerity, with France for example facing quite a challenge in this area. Here, one clear and additional danger is for the downwards spiral of wage competition to become even more powerful if and when the core were to react to its manufacturing recession by also resorting to the technique of internal wage devaluation.

To be fair, the Conference Board does put the policy of wage devaluation into some perspective:  “Hollowing labour costs can only do that much’. It also admits that the more successful economies in Europe are competitive because they operate in niche markets while paying relatively high labour compensation. Moreover, the Conference Board even presents a scenario (which is unfortunately not detailed, at least not in the texts available in the public domain) in which a fiscally integrated Europe would attract more investment, resulting in more innovation, improved competitiveness of the troubled member states as well as the rest of Europe and even in (slightly) higher unit labour costs. In the end however, by putting so much stress on wage costs as such, the Conference Board’s study remains neatly inside the lines of mainstream European economic thinking, thereby de facto supporting the continued implementation of those policies that, far from delivering tangible positive results, are pushing the Euro Area into economic and social disaster.

With no political union in Europe, the Euro crisis may be a ‘never ending game’ for deep-rooted economic reasons

The Brussels deal to save the Euro confounded its Anglo-Saxon doubters.

After six years of austerity, Ireland’s coalition government has little room to manoeuvre.