A growing body of literature on trust is concerned with the lack or decline of trust and its potential consequences on democratic legitimacy and effective governance. Compared to Western Europe, the populations of Eastern European countries demonstrate persistently lower aggregate trust levels towards the political system and institutions, which poses a concern for social scientists and policy-makers alike. Why is political and institutional trust lower in Eastern than in Western Europe? Three competing approaches offer explanations.

The first one highlights the differences in certain macro-level features between the West and the East, such as in political culture or in income levels. The second approach argues that the characteristics of specific institutions matter the most: since institutional performance in the newer democracies is less effective and less fair (less democratic, transparent, inclusive etc.) than in the West, people also tend to place less confidence in those institutions. The third approach focuses on the micro-level, and aims to identify differences in the individuals’ attitudes, preferences or social statuses, which would affect the levels of institutional trust. Our analysis shows that the third approach does not stand on a solid empirical ground and that the reasons for different trust levels between Eastern and Western Europe may lie in the first two explanations and that the micro-foundations of institutional trust do not differ substantially between Western and Eastern Europe.

Some macro-level approaches that aim to explain cross-country differences in institutional trust refer to variations in the level of development or in political culture as a key explanatory factor. Indeed, as Figure 1 below shows, there is a remarkably strong association between social trust and institutional trust at the country level. In this chart, Eastern European countries (with the exception of Estonia) are located at the bottom left corner, while most Western Europeans are in the middle and at the top right corner, which demonstrates that in the Western part of the continent the aggregate levels of social and institutional trust are higher than in the East. 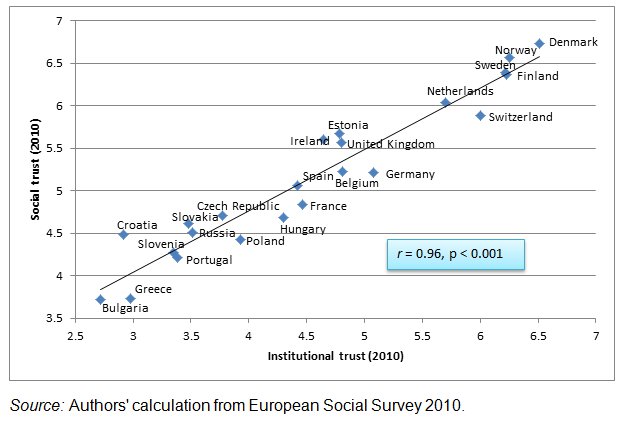 Figure 1 may also suggest that trust is a general cultural attribute rooted in social history, experiences, and shared values. However, the rather unfavourable public attitudes towards institutions in Eastern Europe can also be explained by problems of legitimacy and governance effectiveness, which is characteristic of these states.

Social trust might be also dependent on other factors of trust – instead of being a foundational element of social reality. For instance, we found that the volatility of both social and institutional trust is higher in Eastern Europe. This suggests that other factors also play a role in shaping trust levels (see Figure 2). 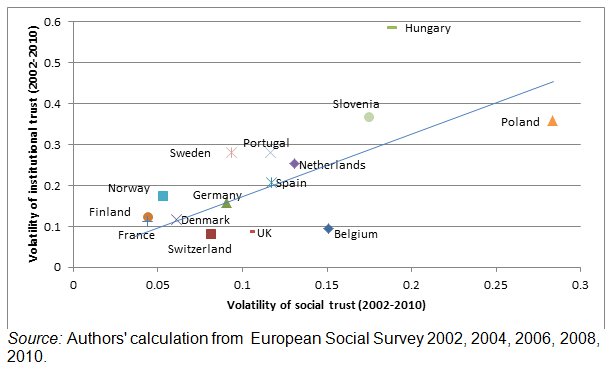 Institutional trust and per capita GDP also show a strong association with each other (see Figure 3). However, their relationship may be circular: high GDP and a well-functioning economy may lead to higher levels of trust, but trust may also contribute to a better and more effective institutional functioning, as argued above. Thus the approach emphasising the role of the performance of political institutions may be highly relevant: according to Tom Tyler and others, trust depends first and foremost on the fairness of the procedures that institutions use, in addition to institutional outcome and effectiveness.

Figure 3: Association between institutional trust and per capita GDP (2010) 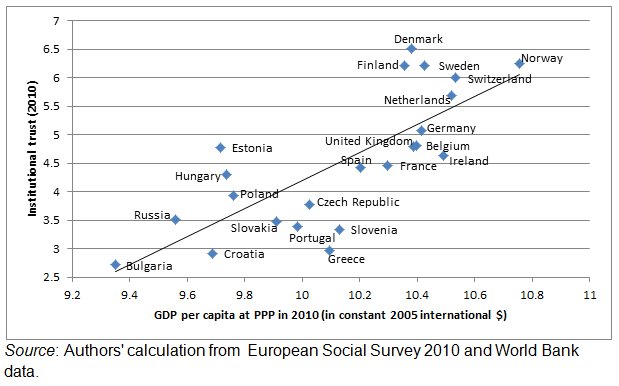 Given that most of the democracies in Central and Eastern Europe were established more than 20 years ago, we could at best refer to them as newer but no longer as new democracies. Since the majority of these states have already gained membership in the European Union, it is safe to claim that they have established the institutional foundations of market economy and democracy. For this reason, we argue that citizens of Central and Eastern Europe (at least in those democratic countries that are either EU members or prospective members) may not differ from their Western European peers in a sense that the same micro-level socio-economic and demographic factors affect institutional trust in both parts of the continent. Moreover, we expect that the same factors show the same directional relationships both in Western and Eastern Europe. This hypothesis also implies that the cross-country differences in institutional trust cannot be explained by referring to micro-level foundations. Instead, differences in political culture and the (perceived) performance of institutions may explain the variation.

Our empirical analysis seems to reinforce the above hypothesis. We ran OLS regressions on country samples from the latest (2010) European Social Survey, and in the model we included indicators of social trust, happiness, media consumption, level of socialising, level of religiousness, household income, age, level of education, type of domicile, gender and membership in a minority group as predictors of institutional trust. We found that while controlling for the other factors, income became a weak predictor of institutional trust even though it showed a positive relationship with it. All in all, we found a uniform pattern in that the levels of social trust, happiness and religiousness demonstrate a statistically significant, positive association with institutional trust in the whole sample, across all countries. Other variables were either statistically insignificant or did not demonstrate a clearly identifiable cross-country pattern.

This article is based on: Boda, Z., & Medve-Bálint, G. (2012). Institutional Trust in Central and Eastern European Countries: Is it Different from Western Europe? Presented at the EPSA 2nd Annual Conference, Berlin.

Preventing racism at Euro 2012 is not just the responsibility of Poland and the Ukraine. UEFA must take a harder line.

Georgian Dream’s election victory puts the country at a crossroads between Russia and the West.