Elections are due to be held in Catalonia in November, with President Artur Mas also promising to hold a referendum on Catalan self-determination. Montserrat Guibernau assesses the prospects for the referendum, noting that the Spanish constitution currently prevents any direct vote on the issue. Despite this, she asks whether the EU could ignore the results of such a referendum given its commitment to promoting democracy in Europe.

This research is generously supported by a Leverhulme Trust Fellowship.

Artur Mas, president of Catalonia, has called an early election for November 25th and promised to hold a referendum on self-determination. His initiative is a response to last month’s 1.5 million strong peaceful demonstration on the streets of Barcelona calling for independence. Citizens are profoundly dissatisfied with the way in which they are being treated by Spain; they resent long-lasting limitations to Catalan demands for greater political autonomy allowing them to redress the accumulating annual deficit of 8 per cent of Catalan GDP due to the financial arrangement imposed by the Spanish state. They also lament the lack of recognition of Catalonia as a nation within Spain. Cultural and identity issues feature strongly among their demands.

In a meeting with Spanish Prime Minister Mariano Rajoy held in Madrid on 20 September, Mas requested an independent treasury for Catalonia with its own tax base akin to the model already enjoyed in the Basque Country and Navarra. Rajoy’s response was ‘no’ and this triggered the Catalan President’s decision to call a snap election. Mas’ initiative has the support of the majority of the Catalan Parliament, which includes the following political parties: Convergence and Union, the Catalan Republican Left, Initiative for Catalonia – Greens, and Catalan Solidarity for Independence.

The latest Feedback opinion poll has coincided with the announcement of a fresh Catalan election. It registers 44.7 per cent support for Artur Mas ‘as the leader that best represents Catalan interests’, miles away from the other leaders who are rated between 1.7 and 5 per cent. Support for pro-sovereignty parties has increased and they are expected to obtain over 2/3 of the seats in the Catalan Parliament at the election. In a June poll, 68 per cent of those surveyed felt that Catalonia has thus far achieved an insufficient degree of autonomy, and 51 per cent said that they would vote in favour of independence in the coming referendum, as shown in Figure 1. 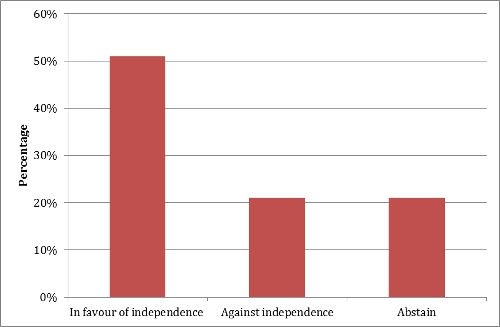 A clear majority in favour of Catalan sovereignty would grant legitimacy to Mas’ commitment to hold a referendum on self-determination after the election. This is a crucial issue, because the Spanish Constitution does not allow the holding of such referendums, as the Spanish government has stated. According to the Constitution, Spain is a single ‘demos’ formed by ‘all Spaniards’; the Catalans are regarded as a part of that single ‘demos’ and this automatically deems any attempts to hold a referendum on self-determination in Catalonia illegal. In turn, Article 2 of the Constitution argues that ‘the Constitution is based upon the indissoluble unity of the Spanish nation, common and indivisible patria of all Spaniards’, and Article 8 states that ‘the Army’s mission is to guarantee the sovereignty and independence of Spain, to defend its territorial integrity and the constitutional set up’.

In his most recent speech to the Catalan Parliament, Mas has argued that he seeks the creation of a Catalan state within the European Union, one which should emerge out of a ‘peaceful and democratic process’ in which the Catalans are granted the right to decide upon their political future. He insists in using the word ‘self-determination’ instead of ‘independence’, arguing that the latter is no longer viable in an interdependent world. He insists that his proposal does not represent a ‘break up’ or a ‘goodbye’ to Spain since a Catalan state would not turn its back to the Spanish state, instead it could address it as an ‘equal’ within the EU framework. In the current economic and socio-political environment, Mas presents self-determination as the only available option for Catalonia to fulfil its own potential as a democratic, modern European nation.

In Spain, hostility against Catalan demands has been accompanied by threats to suspend Catalonia’s autonomy amid accusations of sedition against Mas and his government. Suggestions that the Spanish Civil Guard (the Guardia Civil) should be ready to take over and run the Catalan police (Mossos) have been expressed by Spanish Popular Party MEP Vidal-Quadras, while Alicia Sánchez-Camacho, leader of the Catalan branch of the Popular Party, has firmly distanced herself from such assertions. The Popular Party’s speaker in the Spanish Constitutional Commission, Pedro Gomez de la Serna, has stressed that ‘the State will guarantee article 2 of our Constitution, which is based upon the indissoluble unity of Spain’; an assertion reminding citizens that the Army is the guarantor of the territorial integrity of Spain.

Three main issues emerge from the current situation. First, in terms of the role of the Constitution, the Spanish government is treating the Constitution as static and unable to adapt to different political environments when, for example, the American Constitution has been changed on numerous occasions to redress some situations originally considered ‘normal’ and later recognized as ‘unjust’: among them the prohibition of female voting, the practice of slavery – particularly in the South – and voting rights for Blacks and Native Americans.

Second, democracy is not achieved once and for all; it requires a constant dialogic process based upon popular sovereignty. Referendums are instruments to bring democracy closer to the citizens. Legitimacy emanates from them. Last, the European Union is a democratic intergovernmental institution committed to the protection of diversity. It is also an institution funded and run by nation-states. Could the EU ignore Catalan aspirations if they were expressed democratically? Would it turn its back to an eventual use of force against the Catalans?

In response to an important article by Karlo Basta on this blog, I consider it a mistake to speak of ‘balkanization, Iberian Style’ for four main reasons. First, balkanization was instrumental to the disintegration of the former USSR and, as such, partly encouraged/allowed by Western powers. Second, powerful geopolitical interests were at stake in the Balkans; this is not the case in Catalonia.

Third, war in the Balkans took place at a time when there was a power vacuum and before some of the former Soviet republics applied for EU membership. In contrast Spain is an EU member, which initiated its peaceful transition to democracy in 1976. However, its initial impetus to accommodate national minorities was partly weakened by the attempted coup d’état in 1981 -followed by a second failed attempt in 1982- and the subsequent resurgence of neocentralism associated with the second mandate of Prime Minister J.M. Aznar (2000-2004). At present Spain is expecting an imminent bail out from the EU.

Last, it is striking that not once is the word ‘democracy’ mentioned in Basta’s article, when democratic arguments have been a constant in the Barcelona demonstration and feature prominently in the Catalan political debate. Some knowledge of the Spanish dictatorship and the transition to democracy is indispensable to comprehend some of the arguments, threats and fears expressed today.

The author would like to thank the Leverhulme Trust Fellowship which runs 1st October-31st July 2013. It is to research the rise of Catalan secessionism, euroscepticism in the UK and the Greek’s reaction to the cuts from Brussels.

Montserrat Guibernau – Queen Mary University of London
Montserrat Guibernau is Professor of Politics at Queen Mary University of London. Her most recent publications are For a Cosmopolitan Catalanism (Angle, 2009), The Identity of Nations (Polity Press, 2007), Catalan Nationalism (Routledge, 2004), Nations without States (Polity, 1999) and The Ethnicity Reader (Polity, 2010). She is Co-editor of Nations and Nationalism, and Política y Sociedad, and a member of the Scientific Committee of the Canadian Research Chair in Quebec and Canadian Studies (UQAM).

Unless Catalan parties can work together, there is a danger that Catalonia could soon become ungovernable.