Since its origins, there have been competing views concerning the nature, scope and objectives of the process of integration and of the European Union. Attitudes towards Europe and European integration, both among political elites and citizens, have been much studied over the last 15 years. But there is no comprehensive analysis of these competing views of Europe at the supranational level. Stuart A Brown reviews Nathalie Brack and Olivier Costa’s edited collection on  the divergence in views about the European Union, which lends insight into its consequences for the functioning of the EU and its institutions. 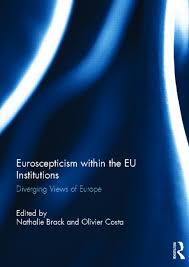 Euroscepticism has become a stable feature of European democracies. Concerns over the direction of the integration process now extend far beyond their traditional heartlands in the United Kingdom and Scandinavia, to include mainstream politicians in most EU member states. Compiling articles from a special issue of the Journal of European Integration, Euroscepticism within the EU Institutions asks whether these diverging views of Europe have also now entered the EU’s own institutions. Do European Commissioners, EU civil servants and other staff share some of the concerns of Eurosceptic politicians?

This idea is slightly provocative, as it goes against some of the conventional wisdom on how EU institutions are expected to act. The Commission and the European Court of Justice (ECJ), for instance, have traditionally been assumed to have an ‘integrationist bias’ in the sense that they favour delegating more powers to the EU than an average national politician. Nevertheless, as Nathalie Brack and Olivier Costa argue succinctly in the introduction, there is some fairly sound reasoning for examining Euroscepticism at the EU level. If Eurosceptic politicians are becoming increasingly common, then we would expect that this would have a knock-on effect on the EU institutions. Electorates should be more likely to vote for Eurosceptic MEPs; while Eurosceptic governments may be more likely to nominate Commissioners and ECJ Judges who are in keeping with their views.

The five main articles in the book all cover different aspects of the EU’s institutional system. The first, written by Renaud Dehousse and Andrew Thompson, looks at the European Commission and the different conceptions of European integration that Commissioners and Commission staff hold. The analysis provides evidence for the existence of a small minority of Commission staff who have reservations about not only increased European integration, but the Commission’s own role in EU decision-making. Although the basic insight here seems relatively mundane – Commissioners aren’t a unified block, but have different opinions on how the EU should work in practice – the conclusions are an important contribution in understanding the occasionally contradictory stances taken by Commissioners when engaging with other institutions.

Following on from this, Cécile Leconte’s paper addresses the specific dilemma of a Eurosceptic government holding the rotating Presidency of the Council of the European Union. The conclusion here is not particularly enlightening: the country holding the Presidency effectively has their hands tied by the administrative nature of the role and even strong Eurosceptic figures, like Czech President Václav Klaus, have their work cut out for them in terms of pushing through Eurosceptic agendas. This is not really the author’s fault, of course, but as a topic it does seem to sit rather awkwardly with the other articles. The presence of an overtly Eurosceptic government in Europe would surely have far more important consequences for European integration than the minor impact manifested through the rotating Presidency – which, as the article recognises, is a much diminished position since the Lisbon Treaty and the creation of a permanent President of the European Council.

The third article, by Nathalie Brack, looks at Eurosceptic MEPs. Of all the topics covered in the book, Euroscepticism within the European Parliament is arguably the one which has received the most attention in previous pieces of research. Indeed, anyone with a passing interest in the workings of the Parliament will likely have witnessed a grandstanding speech from a Eurosceptic MEP at one time or another, such as United Kingdom Independence Party (UKIP) leader Nigel Farage’s famous haranguing of the President of the European Council, Herman Van Rompuy. While the analysis never goes much further than a fairly ad-hoc categorisation of the different types of Eurosceptic MEP present within the Parliament, some of the interview responses from the politicians interviewed make for genuinely fascinating reading. UKIP MEP Trevor Colman, for instance, offers the rather depressing insight that he only turns up to Parliament because “if I don’t put my card in the slot to vote, I don’t get my money”.

The penultimate offering from Vivien Schmidt is an interesting discussion on ‘diverging visions of Europe’ among EU leaders. She argues that while a country’s general attitude toward European integration – such as the broadly Eurosceptic approach of the United Kingdom – develops over time, and is dependent to an extent on the actions of previous governments, this ‘path dependency’ can be disrupted by periods of crisis. The implication is that current problems in the eurozone have the potential to disrupt established attitudes and create more varied views among Member States on the EU’s future direction.  This principle is not reciprocated in the final article by Caroline Naômé, which looks at the potential for Eurosceptic Judges in the ECJ to produce rulings which inhibit the integration process. She finds that ECJ rulings are firmly linked to the past as they rely extensively on previous legal precedent, effectively limiting the opportunities for newly appointed Judges to act independently.

One general drawback of the book, which is perhaps understandable given that it compiles a series of very different articles, is that the definitions of Euroscepticism used in the analyses are quite varied. While the study of the European Parliament adopts a strict focus on outwardly Eurosceptic MEPs, other articles, such as the treatment of European elites, have a broader take based simply on diverging opinions concerning European integration.  In many ways, I found that the broader focus is more rewarding in this respect. Though it makes for interesting reading, categorising different types of Eurosceptic MEP, for instance, has very little policy relevance due to the marginalised position of these individuals and their general lack of influence within the Parliament.

These minor problems aside, the book represents a valuable contribution to studies of the EU’s institutions. The habit of ascribing broad Europhile motivations to complex organisations, such as the Commission or the ECJ, has always been slightly tenuous, and the research outlined in Euroscepticism within the EU Institutions proves that EU officials are just as likely to have a wide range of opinions as any other political actor.

Stuart A Brown is a researcher in the Public Policy Group at LSE. His research interests include economic integration, regulatory processes and EU agencies. He is the assistant editor of EUROPP. Read more reviews by Stuart.