The book combines a feminist critique of contemporary and prominent approaches to cosmopolitanism, with an analysis of historical cosmopolitanism and the manner in which gendered symbolic boundaries of national political communities in Britain and Germany are drawn. Exploring the work of prominent scholars including Held, Habermas, Beck, and Bhabha, it attempts to deliver a timely intervention into current debates on globalisation, Europeanisation and social processes of transformation in and beyond specific national societies. Reviewed by Joe Laking. 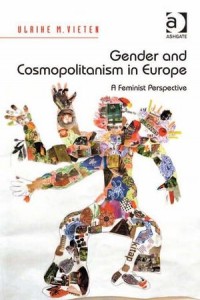 Gender and Cosmopolitanism in Europe: A Feminist Perspective. Ulrike M Vieten. Ashgate. May 2012

Ulrike M Vieten explores the highly contested concept of cosmpolitanism in this recent book. Through an in-depth engagement with the work of key cosmopolitanism thinkers including Jürgen Habermas and Homi Bhabha, and considering feminist criticisms from Chantal Mouffe, Vieten provides an an engaging but challenging read.

Vieten first introduces the concept by discussing the tension suggested in its etymology:

“The tern ‘cosmopolitanism’ can be broken down to ‘cosmos’ and ‘polis’ and in doing we can see the two dimensions of the concept: on the one hand cosmopolitanism suggests a privileged belonging to a particular political community (polis), and on the other hand the imagination of its extension to world scale (cosmos).” (p.2)

Subsequently, the cosmopolitan subject could be considered to be the quintessential business citizen of late modern capitalism. Considered to be valuable to a national economy or, slightly more perplexingly, a transnational airline, they are waved through customs and passport queues. They are citizens of the world. However, as Vieten notes, Jewish refugees of the Nationalist Socialist regime in Germany came to be thought of and to identify as cosmopolitan subjects, but in this case their stateless and rootless existence was one forced upon them. Like asylum seekers, they too became citizens of the world with no state willing to take responsibility for their wellbeing.

Vieten moves on to engage with ideas of cosmopolitanism that have come about in Germany (Jürgen Habermas and Ulrich Beck) and the UK (Homi Bhabha and David Held) and corresponding post-socialist/feminist criticisms from Hanna Behrend and Chantal Mouffe respectively. Vieten connsiders the theories espoused by each and questions whether the theories are genuinely cosmopolitan in scope or bearing or whether they slip into a parochial idea of euro-centricity.

Vieten argues that each theorist’s ideas of cosmopolitanism were strongly influenced by the historical cultural and political context within which they worked. It is suggested that rather than cosmopolitanism arguing against state nationalism, a ‘novel form of regional cosmopolitanism is underway in Europe’ (p.7) that is supported and perpetuated by the European Union and each of the theorists to a greater or lesser degree.

For the author, both Habermas and Beck’s considerations relating to cosmopolitanism are structured by an emphasis on territorial allegiance and social cohesion. In their work post-9/11, both suggest that the European Union is the supra-national body best placed to protect and promote citizen’s cosmopolitan rights.

The post-Marxist feminist critique of this brand of cosmopolitanism bought in by Behrend suggests that both these ideas argue for an idea of the weltbürger, or global citizen. Behrend contends that once subjects are removed from the national context there rapidly becomes no one to fight for the subject left adrift in the world. However Behrend’s alternative is found also to be based on a ‘thick’ idea of political community, a class based national community fighting to protect and promote working class interests.

In the case of Bhabha and Held, and the UK context more generally, Vieten considers the legacy of the British Empire and the UK’s (and particularly London’s) historical and contemporary political support for a commercial cosmopolitanism. This can be traced to the contemporary political debates mentioned in the introduction. Held’s position at the London School of Economics and academic closeness to Anthony Giddens (whose work The Third Way was such a strong influence on the New Labour project) is considered when looking at his advocacy of a neo-liberal market based cosmopolitanism. This idea of cosmopolitanism is criticised for focusing on the upper-middle class business citizen, and neglecting any consideration of those subjects marginalised by the current neo-liberal system. Those undocumented migrants who exist as cosmopolitan citizens, but who do not have the protection of ‘belonging’ to any particular nation-state.

Bhabha, by contrast, is considered to be much closer to advocating a minoritarian form of cosmopolitanism. He puts an emphasis on listening to and highlighting the voices from the margins. However, Vieten has concerns that Bhabha’s focus on hybrid culture risks ‘flattening out’ difference within and between cultures. Cultures are only viewed to be cosmopolitan insofar as they are ‘hybrid’ cultures, thus risking setting normative and exclusionary boundaries.

This particular concern highlights a problematic element of any theory that sets static boundaries. Judith Butler suggested in Contingent Foundations: Feminism and the Question of Postmodernism that any attempt to talk of a truly inclusive universal (surely something that a theory of cosmopolitanism should be doing) requires a constant revision and expansion of boundaries. Any idea of the universal put forward today risks setting exclusionary boundaries tomorrow.

While Vieten’s critical engagement with the work of these theorists is fascinating and certainly appears compelling, the extent of the engagement leaves little space for the enunciation of an alternative vision of cosmopolitanism. It may not have been the purpose of this work, but having enjoyed and sympathised with the critical engagement presented I was left hoping for a radical alternative that never took a clear shape.

This book enters into an academic field of enquiry that is often caricatured for navel gazing and preponderance for obtuse language. I don’t necessarily ascribe to either view and believe that there is a legitimate space for academic language, (as eloquently argued by Butler elsewhere). However, it is worth noting that this work sits in this field and may not be the easiest entry into a fascinating debate.