Last month a Swedish newspaper published video footage showing prominent members of the far-right Sweden Democrats (SD) party verbally abusing a Swedish-Kurdish comedian. Anders Hellström argues that while the scandal has undermined the party’s attempts to move into the political mainstream, the issues championed by the SD will remain a pertinent theme in Swedish politics.

The Sweden Democrats (SD) have, for a long time, aspired to move out from the murky shadows of the extreme right to become a mainstream party for the ‘common man’. The aspiration goes back to the early 1990s when the party attracted significant support from neo-Nazis, many of which were involved in violent street activities. Against this backdrop the recent racist scandal that has engulfed the SD is potentially devastating for the party’s ambition to attract moderate party activists and voters.

In November, the tabloid newspaper Expressen published mobile phone footage featuring the party´s economic spokesperson, Erik Almqvist, and justice policy spokesperson, Kent Ekeroth (who was behind the camera), together with a third party affiliate. Recorded in 2010, the three are seen verbally abusing the Swedish-Kurdish comedian Soran Ismail, before arming themselves with scaffolding poles from a nearby construction site and wandering the streets of Stockholm. The film shows Almqvist rejecting Ismail´s right to present himself as Swedish, despite the fact that he carries a Swedish passport. Similar arguments have previously been made against the football player Zlatan Ibrahimovic, first by mainstream sports journalists and then by SD representatives. A young woman intervenes in their discussion and is later dismissed by Almqvist as a “little whore”.

Following publication of the film, a huge wave of protests took place in Sweden, with many journalists writing negative articles about the party and the incident. Jimmie Åkesson, the chairperson of the SD, who recently implemented a zero-tolerance policy on racism within the party, dismissed the two MPs from their positions as spokespersons. Nevertheless, they remain MPs. Internally the situation has opened up divisions within the party, and the public debate on the SD has since become even more polarised. The question of what it means to be Swedish – and not just in a formal sense – has been further accentuated as a consequence.

The public debate on the ideological positioning of the SD in Swedish politics did not start with this scandal, however. Ever since 2010, when the party crossed the electoral threshold to gain seats in the national parliament for the first time, the debate on national identity and immigration has gained momentum and brought repercussions both to Swedish politics and other areas of Swedish society.

In response to the SD’s new status as a parliamentary party, the other seven mainstream parties in Sweden, from the left to the right, have united in a show of repugnance towards them. Sweden is polarised between a minority attracted to the SD, and a majority that dislike them more than any other party. The Swedish national identity crystallizes in this debate between the great majority of Swedes who find a common point of identification against the SD, and the minority who find the anti-immigrant, anti-Islamist and anti-establishment stance of the party attractive. Despite gaining 5.7 per cent of the vote in the 2010 parliamentary elections, none of the other parties wish to co-operate with the SD, at least not on the national level.

The decision made by the Nobel Prize Committee to exclude Jimmie Åkesson from last week’s annual Nobel dinner underlines the idea that the SD does not belong in the mainstream. The dinner is traditionally attended by the Swedish Royal Family, members of the cultural establishment and the leaders of all of Sweden’s parliamentary parties. As an elite-manifestation, the event articulates claims about national cohesion and demonstrates the distinctiveness of the Swedish nation. There is continuity between conceptions of the nation as a separate community, and current discourses which emphasise the values of hospitality and tolerance to illustrate the symbolic boundaries of nationhood.

The SD teeters on the edge of the acceptable and aspires to strike a delicate balance between radicalism and extremism. On the one hand, it is highly stigmatised in Swedish public and political debates. On the other hand, the SD ‘plays the victim’ to benefit from its underdog status in relation to political and cultural elites. The SD wishes to radicalise widely shared popular sentiments in Swedish society about the alleged failure of integration, the negative consequences of multi-culturalism, the social tensions in the suburbs, and social segregation in areas such as education. The party blames the Social-Democrats, who have been in power for several decades, for refusing to see the connection between migration and the implosion of the universal welfare system. The SD encompasses a nostalgic wish for the more homogenous Sweden which they claim existed prior to what they term ‘mass-immigration’. According to the SD, the earlier Social Democrats are the national heroes of the past, while the contemporary Social Democrats have deceived the native population.

The SD suggests a particular “open Swedishness”, based on the ethno-pluralist doctrine of the impermeability and incommensurability of cultural differences. They acknowledge everybody´s right to associate with “their cultures”, as long as they stay out of “our backyard”. Everybody is welcome to become Swedish as long as they give up their other loyalties and identities to voluntarily adjust themselves to Swedish society and become fully ‘Swedish’ (whatever that means). This can take generations of assimilation to realise, since they have to give up their original “cultures”. These messages might resonate rather well with disillusioned voters of both the mainstream left and the mainstream right.

Recent polls indicate that the SD has not suffered much from the scandal. Generous immigration policies are unpopular in Sweden, just as they are elsewhere in Europe. More importantly, potential SD-voters do not seem to agree with the standard media portrayal of the scandal: that the SD has shown its true intentions in the film and is ultimately a ‘devil in disguise’.

In any case, the party is not considered a legitimate political opponent by the political and cultural establishment. The decision not to invite Jimmie Åkesson to the Nobel dinner was made already in 2010, and the recent scandal has certainly made it less probable that he will be invited in the near future. If anything, the scandal reveals that the ‘struggle of Swedishness’ will remain a pertinent theme ahead of the next Swedish national elections in 2014.

Anders Hellström – Malmö University
Anders Hellström holds a PhD in Political Science and is a post-doctoral researcher in the Malmö Institute for Studies of Migration, Diversity and Welfare (MIM) at Malmö University. He is currently leading a comparative research project, financed by NORDCORP, on ideological transformations, organisational development and mainstream reactions to nationalist-populist parties in four Nordic countries. 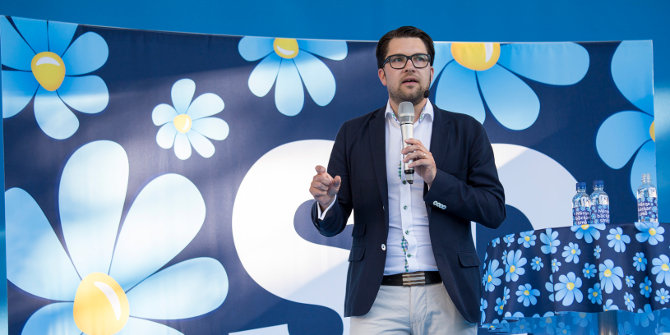