To what extent do corporate tax rates determine where firms are located? New research comparing two industries in Switzerland from Marius Brülhart, Mario Jametti and Kurt Schmidheiny finds that the relative benefits to firms that are highly clustered mean that they are less sensitive to higher tax rates. European governments will find it less costly to raise corporate taxes in areas where industries are highly clustered.

Recent months have seen a public outcry in Europe over the levels of tax paid by some corporations. But is this urge to maximise profits by seeking out low-tax locations the same in all firms? New evidence based on Swiss data shows that firms in geographically clustered industries are prepared to accept higher corporate tax burdens – presumably in return for being closer to the industry cluster. Through our research, we have found that clustered sectors are about half as sensitive to tax rates as dispersed ones. 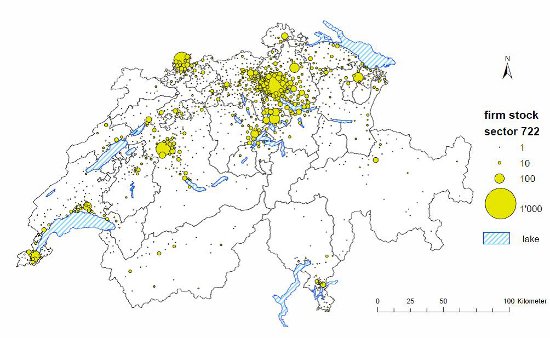 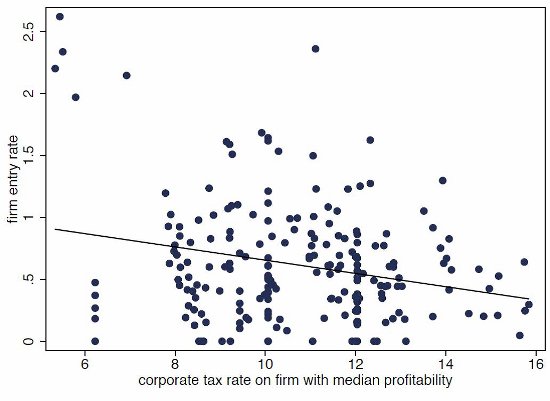 If we turn to watch-making, an industry that is highly clustered in Western Switzerland (Figure 3), a different pattern emerges. 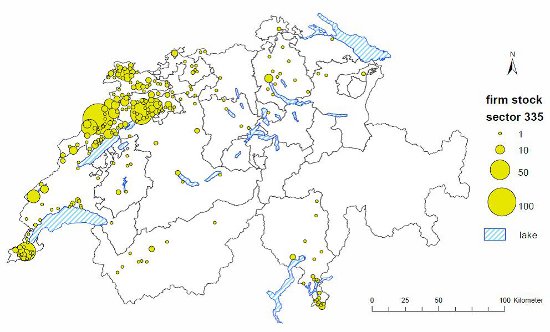 Figure 4 shows a positive – though not statistically significant – relationship between taxes and firm start-ups, suggesting that firms in the watch-making industry are essentially insensitive to tax rates. 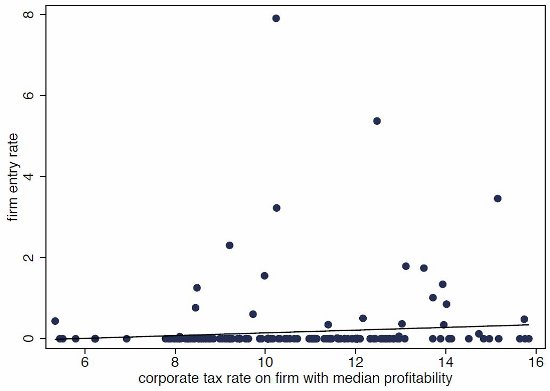 We then went beyond such simple correlations by estimating a location choice model of firm start-ups to empirically assess the hypothesis that agglomeration (clustering) forces can offset regional differences in corporate tax burdens in determining where firms were located. Using data on the industrial sector and the geographical location of Swiss start-up firms from 1999 to 2002, we examined the geographical concentration of existing firms and municipality-level corporate tax rates. This allowed us to estimate how strongly start-up firms sought to locate in low-tax locations and how this tendency varies with the clustering intensity of their industry.

Swiss cantons and municipalities are almost entirely free to set their individual corporate tax rates, which leads to large variations in regional tax burdens. For example, the highest-tax canton applies a corporate tax rate more than three times higher than that of the lowest-tax canton. But apart from its exceptional internal variation in tax burdens, Switzerland covers a relatively small, institutionally homogenous and economically highly integrated territory. This makes it a useful setting for testing the effects of regional differences in taxation.

The key challenge for our research design was that firms can participate in local politics and thereby influence tax rates. Hence, local taxes can be both a cause and consequence of firms’ location choices. As a result, we took a number of analytical precautions to ascertain that what we measured was indeed the causal effect running from taxes to location choices and not the other way around. One such precaution is our focus on start-up firms only, since newly established firms are much less likely than incumbent firms to affect pre-existing generally applicable local tax rates.

We found that the size of the effect of clustering on tax sensitivity is not trivial. Going back to our illustrative example, our results predict that a one-percentage-point reduction in the tax rate would attract 0.051 additional software firms, but only 0.023 additional watch-making firms.

These findings imply that there is less danger of a global ‘race-to-the-bottom’ in corporate taxes than there would be in the absence of forces that promote clustering. At the European level, this could mean that the capacity to raise taxes in economically central locations – such as Germany, France and the UK – may not be fundamentally threatened by low corporate taxes in Europe’s periphery in the south and east.

Marius Brülhart – University of Lausanne
Marius Brülhart is a Professor in Applied Microeconomics at the University of Lausanne. He is a CEPR (Centre for Economic Policy Research) Research Affiliate (International Trade Programme); an External Research Fellow of the Centre for Research on Globalisation and Economic Policy at the University of Nottingham; and an International Research Fellow at the Kiel Institute of World Economics. He has worked as a consultant to the OECD, the World Bank, the Inter-American Development Bank, the European Commission and the Swiss government. His main research interests are in international trade, economic geography and public finance.