Brussels blog round-up for 19 – 25 January: War in Mali, Cameron’s Europe speech, and has the ECB done enough to save the euro?

Brussels blog round-up for 19 – 25 January: War in Mali, Cameron’s Europe speech, and has the ECB done enough to save the euro?

Lost in EUrope says that it is telling that the anniversary celebrations for the 50th anniversary of the signing of the Elysée Treaty between France and Germany are being held in Berlin, and not Paris. Coulisses de Bruxelles says that France and Germany’s ongoing inability to compromise over reform may be resulting in reduced European ambitions. Meanwhile, Eurosearch looks at declining levels of trust in the EU.

After the retirement of Jean-Claude Juncker, the Eurogroup (the meeting of the eurozone’s finance ministers) is now to be led by the Netherlands’ Minister of Finance, Jeroen Dijsselbloem. Lost in EUrope argues that given the current state of the Netherlands economy, there is little that may qualify him for the position.

Wyn Grant at the Common Agricultural Policy blog writes that 75 per cent of EU farmers could not survive without subsidies. He says that farmers must be made better able to make a return from the market through better competition policy between themselves and supermarkets.

Following the French intervention in Mali, and the Algerian hostage crisis, unrest in North Africa has moved sharply into focus. Kristalina Georgieva, of the European Commission, discusses her recent visit to Mali and how the situation in the country has changed drastically since. Zoltán Massay-Kosubek, writing at blogactiv.eu, gives a French perspective on the intervention and assesses the consequences for the EU’s Common Foreign and Security Policy.

On a slightly different topic, European Geostrategy take a look at the flow of weapons from crisis hit areas such as Mali and Syria. They note that part of the reason for the emergence of the problems in Mali is that weapons used in the Libyan civil war in 2011 spread into the country via the black market.

The Centre for European Reform asks whether the ECB has done enough to save the euro. They argue that although things have stabilised since last summer, there are still some serious issues that need to be overcome. The OFCE blog also shows some cautious optimism by arguing that a recession in the eurozone is not inevitable. Meanwhile, a Fistful of Euros discusses declining investment across Europe – a problem its governments appear to be contributing to.

Lost in EUrope reports on the €9.5 billion funding gap for Greece reported by the IMF this week (apparently the IMF still fears a ‘Grexit’ according to the FT’s Brussels Blog).

Nada es Gratis looks at the attempts to correct asymmetric imbalances across the countries of the EU.

In Austria this week, 60 per cent voted to maintain conscription in a national referendum, provoking Debating Europe to ask the question, ‘Should conscription be abolished in Europe’?

This week finally saw David Cameron’s long-awaited speech on the UK’s relationship with the EU. Ahead of Wednesday’s speech, Kiels Prat in Europe writes that ⅔ of people aged between 18 and 34 in the UK support EU membership, and that a forward looking Prime Minister would focus on the needs and interests of younger people. Meanwhile, Cafe Babel says that Cameron’s EU strategy should be of concern to all EU citizens. Open Europe says that despite uncertainty over the UK’s relationship with the EU, the value of the pound is unlikely to be overly affected.

After the speech, Sir Michael Leigh, writing at the GMF blog, argues that Cameron’s plan to hold a referendum is “fraught with risk”. The Centre for European Reform take a similar line, calling it “optimistic, risky and ambitious”. Meanwhile Open Europe take a look at the response in the German media, which they label “cautious, but receptive”. They also note that Angela Merkel’s response suggests there may be the potential for a renegotiated relationship if the UK’s demands are ‘fair’. Taking a practical view in light of Cameron’s desire for changes to the UK’s relationship with the EU, the FT’s Brussels blog looks at how the EU’s treaties might be revised.

The New Federalist looks at moves in Iceland to suspend that country’s EU accession process until after parliamentary elections in April. They say that the EU does not much appeal to Icelanders anymore.

Image of the week

Open Europe have a word cloud of David Cameron’s speech on Europe: 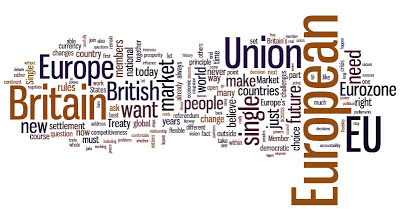 What has President of the European Council, Herman van Rompuy been up to? This week he met with the Prime Minister of Montenegro, Milo Đukanović, and attended an EU-Brazil summit.

Nada es Gratis takes a look at football revenues in Spain, which are growing despite the negative economic climate.

Brussels blog round-up for 29 December – 4 January: guaranteeing jobs for the unemployed, an uncertain future for Václav Klaus, and should academics make blogging their New Year’s resolution?

Brussels blog round up 5 – 11 October: Berlusconi on the ropes, Ireland’s referendum, and are Germans really becoming more Eurosceptic?