When immigrants in Switzerland apply for citizenship, the decision is made in the municipality where they reside. While in some parts of Switzerland these decisions are made by elected representatives, in other municipalities individual applications have in the past been subject to a public referendum. Dominik Hangartner and Jens Hainmueller assess the impact of direct democracy on citizenship applications, finding that far fewer applications are accepted when a referendum is used. The applicant’s country of origin is the most important factor in determining success, with applicants from Turkey and the former Yugoslavia over ten times more likely to be rejected than those from other countries, such as Italy.

We have collected and analysed data for more than 2,400 applicants that faced popular votes between 1970 and 2003. The results show that success in naturalisation referendums depended strongly on the applicant characteristics. Whereas the applicants’ language skills, economic success, and integration status played almost no role, the applicant’s country of origin was by far the most important driver of naturalisation success. Among otherwise similar applicants, the risk of being rejected by voters was more than ten times higher for immigrants from Turkey and (the former) Yugoslavia compared to immigrants from Italy or Spain. The statistical evidence also showed that this origin-based discrimination was much stronger in more xenophobic municipalities. The results of the study are detailed in the video below, and a more comprehensive review of the findings is available in a recent American Political Science Review paper.

But do immigrants fare better if naturalisation requests are decided by elected politicians, instead of voters? We collected data on naturalisation decisions from over 1,400 municipalities for the period between 1991 and 2009. In the early 1990s, over 80 per cent of municipalities used some form of direct democracy. However, in the early 2000s – following a series of landmark rulings by the Swiss Federal Court – about 600 municipalities switched to representative democracy and delegated application decisions to the elected municipality council. 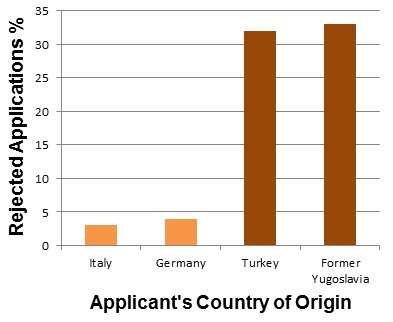 Overall, many qualified immigrant applicants who were rejected by voters in naturalisation referendums would be Swiss citizens today, if their application had been decided by elected officials in the municipality council. Direct democracy provides a significant barrier for access to citizenship and it has a disproportionately large effect on those immigrant minorities who are the most marginalised in society. The empirical evidence suggests that naturalisation applications should be decided by elected municipal councils in order to minimise the risk of discriminatory rejections.

Jens Hainmueller – Massachusetts Institute of Technology
Jens Hainmueller is an Associate Professor in the Department of Political Science at the Massachusetts Institute of Technology and a Fellow at the Institute for Quantitative Social Science at Harvard University. Before joining MIT, he completed a PhD at Harvard University and also studied at the Harvard Kennedy School, the London School of Economics, Brown University, and the University of Tübingen