Quantitative easing has been adopted by a number of central banks in the wake of the global financial crisis. John Doukas takes an in-depth look at the effects of quantitative easing, arguing that it not only fails to increase real economic activity, it also increases unemployment and encourages outsourcing to developing countries that offer higher rates of return. He concludes that economic growth and job creation should be the priority of western governments and not of central banks.

Since the global financial crisis erupted in 2007, central banks have been dealing with “tail” risks arising from private (mortgage and consumer) and governments’ excessive leverage or the potential for disasters, such as the break-up of the Eurozone. While these defensive policies seem to have worked in the short-run, their long-term results remain doubtful, if not destabilising.

More recently, the task of major central banks has shifted towards promoting growth and job creation, without having the ability to deliver on their promises. For example, the repeated Quantitative Easing (QE) policies of the US Federal Reserve in the aftermath of the global financial crisis, with similar actions by the Bank of England and the European Central Bank (ECB), have failed miserably to restore growth and reduce unemployment. Unemployment remains at high levels in the US and is rising at an alarming rate in the Eurozone, especially in southern European countries, with the state of economic activity staying subdued and far from the path of recovery. Figure 1 below shows that since the collapse of Lehman Brothers, unemployment in the southern Eurozone is on the rise despite the ECB’s attempts at quantitative easing. 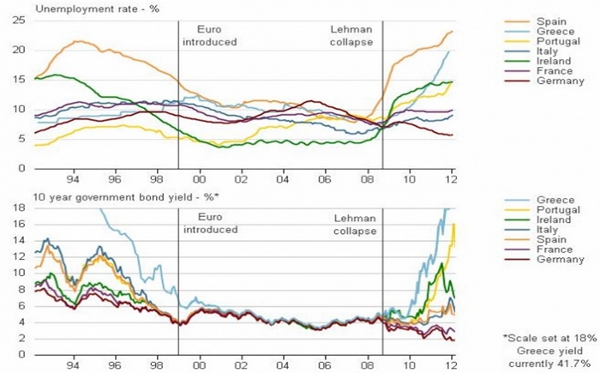 Eurocurrency bloc core countries, France and Germany, are expected to barely grow in 2013. The divergence in bond yields subsequent to the Lehman Brothers collapse mirrors the ECB’s inability to maintain a uniform interest rate policy across the Eurozone, suggesting that its influence on interest rates is limited even in the short-run. ‘State/government money’ creation, as opposed to ‘private money’ or ‘bank-based money’ creation has ‘no turbo power’, as conventionally some tend to believe. To put it differently, there is a transmission stickiness that prevents a central bank’s money supply increases from trickling down to the economy. In sum, central banks have been pursuing multiple objectives using a few tools that are both imperfect and indirect to have a positive dent on the real economy.

As a result of this new central bank policy trend, central banks have inflated their balance sheets with assets of questionable quality, putting themselves at risk. For example, the G4 central bank assets (United States, Eurozone, Japan and the UK), as the following figure shows, account for about 23 per cent of their combined GDP, while interest rates are near zero. The G4 central bank assets were approximately $3.5 trillion prior to the Lehman/AIG crisis meltdown. Today, they are approximately $9 trillion and rising. What is interesting is that the same recipe has recently been adopted by the Bank of Japan, resulting in a sharp depreciation of the Yen and raising concerns about potential currency wars among the major world economies.

Last month, the US Federal Reserve’s Federal Open Market Committee’s minutes sent a chilling signal to the markets that another round of QE was less likely, with stock markets responding nervously. Careful interpretation of the US Federal Reserve’s message suggests that is getting worried about the collateral damage of QE. That is, the expected “benefits” of QE could backfire by rising “cost and risks” if fiscal actions, required to restructure and grow the economy, continue to lag central bank actions in the US and Europe.

This raises the natural question of why central banks have not learned from past boom and busts (i.e. the 1930s, 2001 tech bubble, 2008 financial/mortgage crisis and other “rare” events)? It is well known that there has never been a boom that is not linked with excessive money supply. Easy monetary policies consistently lead to booms and then to busts simply because they reduce interest rates, the cost of borrowing, for both (naïve/noisy) investors and governments that, in turn, raise private (i.e. durable goods, real estate) and government (i.e. entitlements/voter grabbing programs) spending beyond their ability to meet their debt obligations.

The practice of expansionary monetary policy leads to capital misallocation as it favours short-term spending at the expense of long-term spending (investing less in long-term projects). That is, it creates a savings-investment gap that reduces the capital formation required for the economy to grow, which renders a high fraction of its existing capital stock obsolete. This, low interest rate policy, an outcome of quantitative easing, in turn, has an adverse effect on productivity forcing capital to migrate in foreign/emerging markets in order to realise higher returns. In other words, excessive money supply fails to increase real economic activity because it raises the labour cost while it lowers the cost of capital. Depressing yields at home, as a result of quantitative easing, in an open economy setting, leads yield-seeking investors into higher-risk investments such as emerging markets.

This asymmetrical effect of excessive quantitative easing has been overlooked by most, especially Keynesian economists, who believe that lower interest rate policies have the power to lower unemployment through greater spending. While quantitative easing, like expansionary fiscal policy, may increase aggregate spending, this does not trickle down to the real economy because relative prices (labour vs. capital) work against it. This results in higher rates of unemployment with capital flying to foreign markets. A related effect is that foreign economies, especially those with lower labour costs than western economies, become more attractive places to invest because of these lower costs and promising higher returns to capital. That is, quantitative easing encourages outsourcing, as capital is excessively substituted for overseas labour causing jobs and product innovation to move offshore. Imported goods and services from these countries, then, become more attractive to western consumers because they are cheaper in comparison to the ones locally produced resulting in great outflow of capital, outsourcing and unemployment. This vicious circle exacerbates the disadvantaged position of western economies as they are forced to continue relying on overseas lenders to meet their spending needs, leading to mounting budget deficits and external debt.

Taking these effects together, we can see that printing more money will not address the fundamental problems underpinning struggling western economies. On the contrary, it has damaging effects in the long-run in terms of capital accumulation, output, employment, innovation and living standards. What is even more worrisome is that the “buying time” policy adopted by central banks in recent years has failed to boost real economic activity, which, in turn, helps to exacerbate the indebtedness of western economies. The only choice left to central banks, in an attempt to regain their independence and reputation, is to stop yielding to government pressures to address the structural economic problems governments need to deal with. Growth – and job creation – needs to become the overwhelming preoccupation of western governments and not of central banks.

Why not cut taxes, reduce government spending to boost private economic activity, and finally restore the lending-spending link of the private sector instead of central banks loading banks with reserves, and hoping that they will provide credit to the private sector?

John Doukas – Old Dominion University, Virginia
John Doukas is the founding and managing editor of European Financial Management (EFM), the leading journal in European finance. He is also the founder of the European Financial Management Association (EFMA). He is the William B. Spong Jr. Chair in Finance and Eminent Scholar at Old Dominion University, Virginia (United States). He is also an Associate of the Judge Business School at the University of Cambridge (United Kingdom). He earned his Ph.D. in Financial Economics at Stern School of Business, New York University. He has published over one hundred scientific academic articles on a wide range of finance and business-related issues in many academic journals including the Journal of Finance, Journal of Financial and Quantitative Analysis, among others.

Cyprus is the latest casualty of Germany’s ‘one size fits all’ solution to the Eurozone crisis.