In February, after months of negotiations, the European Council agreed to a new multiannual budget for the EU for 2014 to 2020. Ahead of the European Parliament’s vote on the budget, Giacomo Benedetto takes an in-depth look at how spending has changed across policy areas, finding that the largest cuts have been made to policies aimed at enhancing growth, infrastructure and the knowledge economy. With fewer cuts due to be applied to controversial policy areas like cohesion and agricultural policy, the European Parliament may yet vote to reject the current budget proposal.

On 8 February the European Council reached a unanimous agreement on the EU’s next multiannual financial framework (MFF) for the years 2014-2020. The agreement will now go to the European Parliament for approval. According to article 312 of the Lisbon Treaty, the MFF only comes into force following a decision by the governments after the Parliament has granted its consent. It seems that many MEPs take the view that this gives them a right of proposal. Recent reports have suggested that, following the rule book of the Parliament, one-fifth of its members may invoke the right for the Parliament to take this vote in a secret ballot. The possibility of parliamentary obstruction cannot be discounted and has precedents. In 2006, the Parliament blocked the agreement on the current framework (2007-2013) to secure small increases. But what exactly is the European Parliament voting on?

What did the 27 governments agree on 8 February?

The European Council has agreed to a spending ceiling of €960 billion between 2014 and 2020 in 2011 prices, or 1 per cent of gross national income (GNI), in commitments. In payments this equates to €908 billion or 0.95 per cent of GNI. The difference between commitments and payments is one of the problems that exist in understanding the budget. These two figures are maximums which annual spending cannot exceed, so in practice the annual budgets will be lower than 0.95 per cent of GNI. Although €908 billion in payments sounds like a lot of money, it is less than 1 per cent of the size of the EU’s economy and around 2 per cent of total public spending. For each of the seven years, the figure for annual spending reaches a maximum of around €130 billion (in 2011 prices). For the 2014-2020 MFF the European Commission made proposals in 2011, as it did in 2004 for the 2007-2013 MFF. In what follows, I have applied 2011 prices across the board for the sake of simplicity and comparability.

On non-redistribution that provides public goods (collective benefits for the EU economy), 13.1 per cent would be allocated to support economic growth and innovation (heading 1a), including infrastructure and research and development. This is an increased share of spending of 4.5 per cent compared to the existing budget, but is still 2 per cent below what the Commission proposed in 2011. Natural resources (under heading 2) that include environment and rural development but exclude direct payments in agriculture and fisheries should reach 9.9 per cent of spending, a small increase of 0.8 per cent compared to the existing perspective and a freeze compared to the Commission proposal of 2011. The changes in percentage share for security and citizenship (heading 3); global Europe (heading 4) and administration (heading 5) all remain below 1 per cent. In following policy priorities that are set by the governments of the member states, and by the European Parliament, the Commission proposed an MFF in 2011 that increased spending for public goods (under heading 1a and the first part of heading 2), slightly reduced redistribution under heading 1b and very significantly reduced spending in agriculture and fisheries. The agreement of 8 February partly reversed these changes. 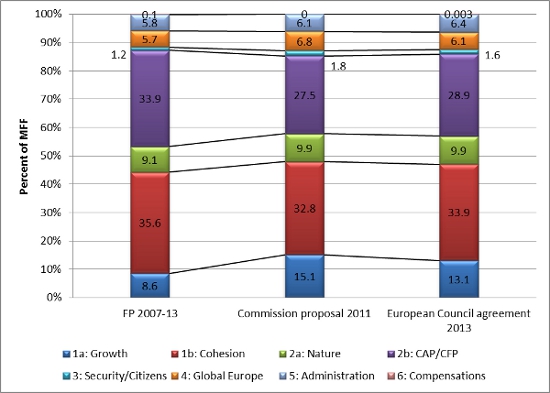 The European Union calculates its budget and any increases or decreases in terms of economic growth rather than inflation. This is perfectly valid, but differs from national approaches. If economic growth exceeds inflation, budgetary increases in the EU may seem exorbitant. When economic growth is lower, spending increases are below inflation. During the good economic years until 2008, the increase in the EU budget was considerably less than the expansion of national budgets. During a recession or times of low inflation, EU spending can appear to be unreasonably high but this is because it has been fixed since 2007 at 1 per cent of GNI for payments. In 2011, the Commission proposed the new MFF for 2014-2020 also at 1 per cent of GNI. In this sense it was a freeze but did not seem so since inflation was lower than economic growth.

As Figure Two illustrates, payments for the 2007-2013 budget round were set at €821 billion in 2004 prices (or 1 per cent of GNI). In 2011, the Commission proposed the new MFF also at 1 per cent of GNI, which in 2011 prices was 18 per cent higher at € 972 billion. Commitments were 5 per cent higher than payments. Because the European Union prefers to manage spending through multiannual programmes, the principles of commitments and payments allow for double budgeting. Commitments are the upper level at which contracts can be made and programmes can be started. Payments, which are usually lower, are the maximum amount in any year that can be paid out on completion of a project. Commitments made during one year have to be honoured with payments two years later if all the conditions are fulfilled. Confusion over the significance of commitments and payments can create deadlock at budgetary negotiations. In order to cut spending, governments try to limit payments which are supposed to honour the payment for projects that the same governments approved two years earlier. The European Parliament and the Commission usually defend commitments more than payments since they allow more generous financial planning and subsequent payments are considered a legal obligation. 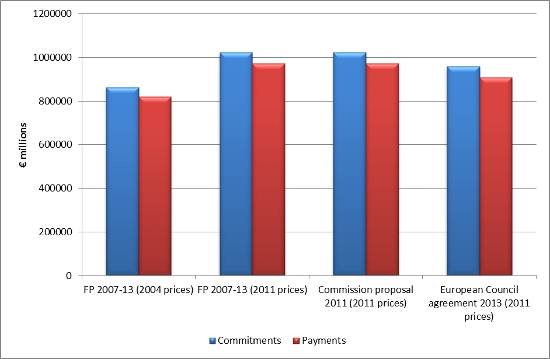 So, while the overall budget has decreased, how have the spending amounts changed across policy areas?  Taking 2011 prices and payments of 1 per cent of GNI as a benchmark, we have totals for payments at € 972 billion and commitments at €1023 billion for the 2007-13 financial perspective. How do these compare with the proposed changes? 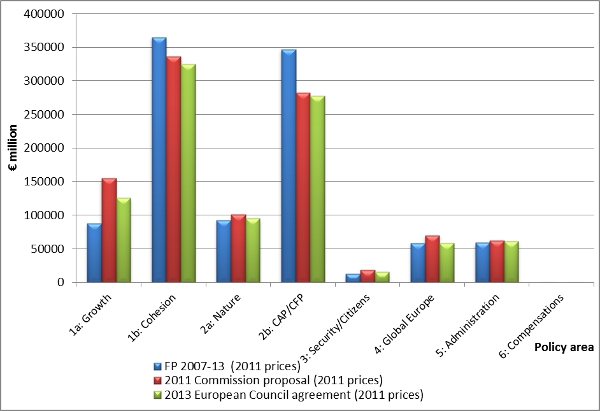 In 2007-13, cohesion (heading 1b) commitments were €365 million or 35.6 per cent of the total. It was expected that after 2013, cohesion payments to the older member states would be reduced to the benefit of states that have joined since 2004. In 2011 the Commission nevertheless proposed a small reduction down to €336 billion. The February agreement further reduced this to €325 billion or 33.9 per cent of a lower total share.

The first part of heading 2 (natural resources excluding direct payments to the CAP and CFP) is an area of public goods that includes environment and rural development. This retained a roughly equal share of the total budget under all proposals of between 9 and 10 per cent, but with a more generous financial proposal from the Commission. The overall cut in spending agreed in February 2013 also applied to this area.

The second part of heading 2 is direct payments for agriculture and fisheries, historically the most controversial budget area. In 2007 these had been reduced from approximately 41 to 33.9 per cent of spending. In figures, this meant €347 billion in 2007-13, with the Commission proposing a reduction to €282 billion in 2011, and the governments further reducing it to €278 billion. Compared to the Commission proposal of 2011, this was the smallest percentage cut to any policy area introduced by the governments. This reflected mobilisation by France and some of the member states that joined in 2004, which were due to access agricultural funds on an equal basis with the old states from the beginning of 2014. The net contributors wanted to reduce the EU budget compared to the Commission’s proposal, but did not do so at the expense of agriculture or cohesion. Instead public goods for innovation in growth, education and infrastructure were targeted.

The next three headings (3 – Security and Citizenship; 4 – Global Europe; 5 – Administration) remain small and have varied little during the stages of the reform debate. Security and Citizenship set at 1.2 per cent of total spending at present was proposed for an increase of nearly half to 1.8 per cent until the February agreement partly reversed this. The shares for the other two headings have varied around 6 per cent of total spending. In the light of the ratification of the Lisbon Treaty and the new responsibilities of Catherine Ashton and her successors, the Commission proposed an increase in the small budget for Global Europe from 5.7 to 6.8 per cent of the total, only to be sent back down to 6.1 per cent on 8 February.

The budget and the European Parliament

In June 2011, the European Commission made a proposal to freeze EU spending at 1 per cent of GNI, to increase spending in real terms on economic growth and innovation by 76.5 per cent, while to cut back on cohesion and agriculture. If ratified by the European Parliament, the MFF proposed by the Council in February 2013 will reverse the substance of the Commission’s proposal. The agreement of February 2013 reduces total budget payments for 2014-20 from €972 billion to €908 billion (or 6.6 per cent) so that spending goes well below 1 per cent of GNI. This is a cut financed most significantly through a reduction in investment in economic growth to guarantee an overall cut that largely protects redistribution in agriculture and cohesion.

The 2006 agreement for the current (2007-13) MFF shared a similar outcome. It cut commitments from 1.08 to 1.048 per cent of GNI compared to 2000-6, it cut payments from 1.07 to 1.00 per cent and, compared to what the Commission had proposed in 2004, the cuts were financed through reductions in the proposed spending for public goods so as to salvage the positions of agriculture and cohesion. In our edited volume of 2012, Simona Milio and I predicted continuity in the MFF because the incentive for a national veto is so high. No new MFF would have meant continuity of the old agreement with projects having to be agreed and re-agreed annually as was the case before 1988. A member state wishing to protect spending would have a clear incentive to use this veto. So far, we have been proved wrong. However, the European Parliament voting by secret ballot may achieve this outcome. In voting against the MFF, government party MEPs may even be doing the bidding of some national party leaders on the European Council, while MEPs from opposition parties are less inclined to agree with the Council particularly if encouraged by the leaderships of the three largest parliamentary groups (EPP, S&D and ALDE). The votes of an absolute majority of 378 MEPs are required to approve the MFF, with absent or abstaining MEPs having the same effect as voting against. In January 2006, the Parliament voted ‘no’ and it could so again.

This article is a shortened version of the longer paper, Understanding the EU budget deal.

Giacomo Benedetto – Royal Holloway, University of London
Dr Giacomo Benedetto is a Lecturer in EU and Comparative European Politics at Royal Holloway, University of London. He has published research on the European Parliament, the British House of Commons, the Constitutional and Budgetary politics of the EU and on Euroscepticism. He is currently conducting research on institutional continuity in the European Parliament following the 2004-7 Enlargements of the EU and on the reform of the EU budget.