What effect do demographic changes have on the success of political parties? Based on official data on German elections since 1953, Laura Konzelmann assesses the potential impact of Germany’s ageing population on party success. Her research indicates that if present trends in electoral behaviour continue, the CDU/CSU and the FDP are both likely to benefit in future decades, while the SPD will be particularly hard hit. This effect could nevertheless be mitigated by other factors, such as the preferences of future generations, and adjustments made by parties to attract older voters.

Germany currently has one of the oldest populations worldwide. Various population forecasts predict that this trend towards an ageing and shrinking population will hold in the future. The public debate on population ageing is mainly concerned with upcoming challenges for the labour market, welfare services, and so forth. Other factors, however, are also relevant in this context: how will an ever increasing share of older people influence the political climate in Germany? Will the demographic imbalance between younger and older individuals lead to the latters’ preferred political parties gaining an increasing share of votes?

What do we know about age-specific voting behaviour in Germany? First, older citizens are much more likely to cast a ballot than younger people. Second, older voters support the Christian Union parties (CDU/CSU) to a greater extent than any other age groups. Assuming that the observed patterns will persist over time we could safely predict that Germany´s political future is already settled: the electoral power of older voters will fuel the victory of the CDU/CSU. Younger people are at a double disadvantage. First, for not sufficiently exercising their right to vote (for whatever reasons) – a changeable issue – and, second, because of their decreasing population share: a fact they cannot escape.

However, interpreting voting behaviour in this manner is a one-sided view. It relates electoral choice merely to individual age, thus rejecting the notion that each of us is also a product of his/her formative experiences in adolescence and young adulthood. In our analyses (see below) we take both factors into consideration. The first explanation, the life cycle effect, assumes that electoral behaviour is determined by age-related needs and demands. This implies that voting patterns are subject to change in the course of life. The cohort effect instead posits that the socialisation process influences electoral choice. People that are born around the same time are expected to exhibit similar behavioural patterns and attitudes. By contrast with the life cycle effect, this argument assumes that voting behaviour – once established – remains stable.

The notion that the electoral fate of Germany is already decided needs to be revised by taking into account the effects of cohorts. Predictions about electoral outcomes vary according to which effect is assumed to be dominant. Regarding the electoral fate of the CDU/CSU, a prevailing cohort effect would foretell a loss in their superiority. The underlying argument is that the cohorts of voters that are positively disposed towards Christian Union parties (especially voters born between 1920 and 1949) will be replaced by cohorts favouring other parties. A dominant life cycle effect instead would, as already mentioned, predict gains for the CDU/CSU.

To assess the impact of demographic shifts on party performances, we examine cohort and life cycle effects by analysing the Representative Electoral Statistics that are available for federal elections since 1953. Our findings show that cohort membership has a stronger effect on party choice than individual age, while the reverse is true for turnout. The net effects of life cycle and cohort, which give information on whether the probability to vote for a certain party is below or above the average, indicate considerable differences between voters of different age/birth cohorts. Weighting these net effects according to the population pyramid in a given election year shows how the interplay between population dynamics and life cycle/cohort effects influence party performances. As can be seen, the life cycle effect clearly has played into the hands of the CDU/CSU in West Germany (Figure 1), while the cohort effect has been disadvantageous for them since the 1960s (Figure 2). The reverse is true for the Greens: they have lost votes due to the life cycle effect while they have slightly profited from inclined cohorts. The Liberals (FDP) have only been affected by both factors to a negligible extent. The Social Democrats (SPD) have been gaining votes due to the cohort effect until 1987; afterwards the effect has been negative and has led to below average values since 2002. Like the FDP, the SPD is not greatly affected by the life cycle effect. 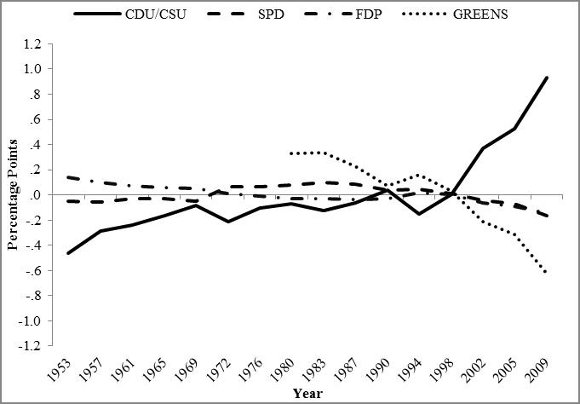 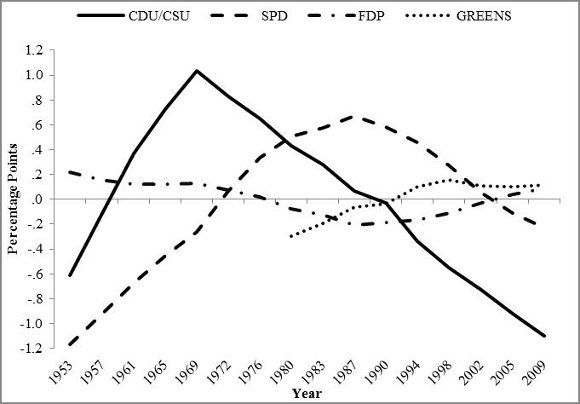 Based on these findings we tackle the question of how population developments might impact on upcoming elections. To this end, we apply the net effects to the future age distribution under certain assumptions (for more details please see our article). The outcome of the interplay between life cycle and cohort effects (combined for East and West Germany) on party performances in light of population ageing is shown below. 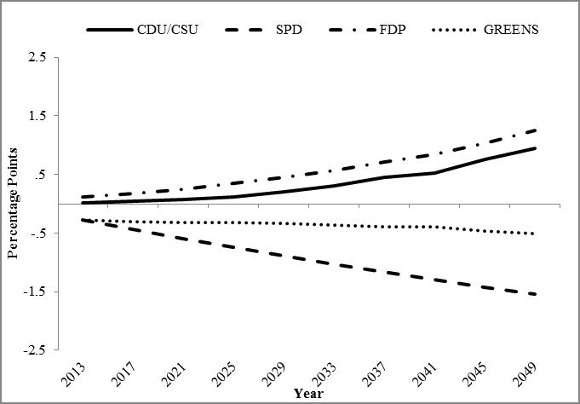 We predict that the CDU/CSU and the FDP will profit from future demographic shifts. The biggest loser according to our model is the SPD which is affected negatively both by cohort and life cycle effects. The Green vote share will slightly decrease, which is particularly due to the life cycle effect. Even if all reported effects are rather modest, the findings clearly show that, all things being equal, demographic shifts themselves exert an influence on elections. Nevertheless, the specifics of each election – i.e. period effects – will probably be even more important for future electoral results. Thus, we would qualify claims that the CDU/CSU will be in charge over the coming decades. Future party performances are by no means already set just because of an ageing electorate. Even though we conclude that the CDU/CSU will profit to a small extent by demographic shifts, there are potentially modifying factors that have to be taken into account. For instance, the preferences of future voter cohorts might differ substantially from currently younger cohorts, which will alter the outlook given here. Besides, what will be essential in the future is the parties’ communicative behaviour and political agendas. The parties might well strive to adjust their actions and images to cater to an ageing electorate. This reorientation might change the German party landscape and put other parties in competition with the CDU/CSU.

The goal of our research is to expand the view on age-specific electoral behaviour by explicitly taking into account transformations of the population structure over the course of time. This approach promises to deepen the understanding of consequences of ageing processes at the aggregate level. Conducting similar analyses in other countries and on other age-specific attitudes and behavioural patterns seems fruitful to enrich the perspective on ageing societies.

Laura Konzelmann – University of Mannheim
Laura Konzelmann is a Research Associate at the Department of Comparative Political Behaviour and the Mannheim Centre for European Social Research at the University of Mannheim. Her research interests include voting behaviour, the consequences of population ageing on political attitudes and political behaviour, welfare state attitudes, and generational conflict.