Saturday morning saw an agreement between Cyprus’ government and the Troika for an €10 billion bailout. The most controversial part of the agreement, as the FT’s Brussels blog noted, was for the government to seize €5.8 billion from Cypriot bank accounts to help pay for the bailout. Lost in EUrope argued that if the policy went wrong, then a bank run could occur in Cyprus. Open Europe wrote that such a radical solution was needed as the Eurozone lacks more precise tools, such as a bank resolution fund. Nada es Gratis made the point that such actions were undermining the contractual basis of the Eurozone. The Real Time Brussels blog argued that the bailout agreement was another illustration of why banks should be discouraged from growing in size to many multiples of countries’ GDP, as was also the case in Iceland and Ireland.

On Monday, Open Europe said that the Cypriot government was scrambling to renegotiate the deal, in the face of public outcry. On Tuesday, Lost in EUrope reported that the Eurogroup (of Eurozone finance ministers) will now only seek to place a levy on deposits greater than €100,000. On Tuesday evening, the Cypriot parliament voted against the bailout plan – Open Europe looked at some potential scenarios of what might happen next, and the FT’s Brussels blog said that the ‘blame game’ had begun, with EU officials that had been involved in the initial talks now backtracking on their desire for a deposit levy.

As the week progressed, the involvement of Russia seemed increasingly likely (as many of Cyprus’s deposits are from Russian sources). Dimitris Rapidis at Blogactiv.eu said that it would be a mistake for the Eurozone to entangle Russia in this ‘geopolitical game’, given that Russia now had the upper hand in discussions about the country’s future. On Thursday, Open Europe noted increasing concern that the European Central Bank might pull the plug on funding for Cypriot banks if no bailout agreement were to be reached. By Friday, it appeared that things had come full circle with a deposit levy once again being discussed. The European Citizen writes that the EU’s ‘shambolic’ approach to bailouts highlights that the EU is operating in a ‘piecemeal’ way to the crisis.

Away from Cyprus, Au Cafe de L’Europe writes that the European Parliament’s recent rejection of the EU Budget shows its desire to reinforce its power and standing as an institution. Meanwhile, eurosearch has taken an in-depth look at the EU’s ‘legislative productivity’, finding that the EU adopts no more new rules than it did in the late 1970s and early 1980s. Europe mon beau souci looks at the decline in the use of the French language by the European Parliament, Commission, and Council.

Meanwhile, A Fistful of Euros has little confidence in any of Europe’s policy makers, especially Olli Rehn. In light of the crisis in Cyprus ACELG looks at ways in which a country might exit the Eurozone, and at Blogactiv.eu Rhein on Energy and Climate says that the European Commission needs to do more to save Europe’s bees, and ban certain pesticides that may be especially harmful to them.

The FT’s Brussels blog reports on a spat between European Commissioner Viviane Reding and the Hungarian government after Reding questioned the independence of Hungary’s judiciary in a recent German newspaper interview.

The OFCE blog looks at the effects in France of a €20 billion reduction in employer payroll taxes on low wages and whether or not it will generate 500,000 new jobs over five years, as has been claimed. Meanwhile, Charlemagne reports that former French President Nicolas Sarkozy is now under formal investigation for his connections with illegal party financing.

Seán Hanley at Dr Sean’s Diary writes on speculation that former Czech President Václav Klaus is considering running for the European Parliament, and whether he might be capable of uniting Europe’s Eurosceptics. Craig Willy has a comprehensive rundown of all European and American foreign policy collaborations and interventions since World War II.

The Political Bouillon writes that with the US taking an ever decreasing role, the UK and France must step up and ‘take the wheel’ on security issues in Africa, while Real Time Brussels has some words of warning for potential free trade talks between the US and the EU.

The GMF blog pushes for European style press councils for the US, as they could offer forums for the public to express their concerns and seek recourse if journalists get their story wrong. Further afield, former German Foreign Minister, Joschka Fischer, writes at Project Syndicate on the Middle East’s ‘lost decade’.

Nada es Gratis looks at the intersection of ideology and ideas, especially in relation to Spain’s debt and fiscal consolidation. On a different topic, Chris Dillow at Stumbling and Mumbling uses Cyprus to illustrate the point that economics is driven by power, not fairness or efficiency.

Beyond the Transition tracks the history of the ‘new order’ of capitalism post-1989, saying that despite its apparent collapse after 2007, there are still few viable alternatives. Last, FEPS Fresh thinking at Blogactiv.eu makes the case for a ‘European’ Europe, rather than one dominated by Germany.

A Fistful of Euros notes some interesting redactions by the IMF on recent financial data: 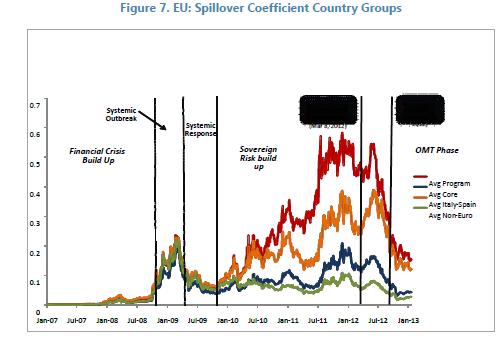 What has President of the European Council, Herman van Rompuy been up to this week? This week he answered questions from Europe’s Citizens on Debating Europe, attended the inaugural mass by the new Pope, spoke about the outcome of this week’s European Council meeting, caught up with the President of ONCE (the National Spanish Association for Blind People), Miguel Carballeda Piñeiro, and spoke at the annual conference of the European Defense Agency.

This week also saw the presentation of the UK’s annual budget. Open Europe wonders if the announced 1 pence drop in duty on beer might be in breach of EU law.

Brussels blog round up 26 October – 1 November: the Commission’s ‘yellow card’, the cost of austerity, and is it legitimate to ban extremist parties?

Brussels blog round up 26 April – 2 May: Commission candidates, Ukraine, and do we really need professional economists?

Brussels blog round up 28 September – 4 October: Letta survives, Austrian elections and should Ireland’s Seanad be abolished?