What determines a country’s bargaining success when negotiating EU legislation? Using data from legislative proposals negotiated between 2004 and 2008, James P. Cross assesses the impact that direct intervention in the decision-making process has on outcomes. He finds that those states which voice disagreement over Commission proposals most often tend to have the least bargaining success.

A number of recent EUROPP contributions have considered the different factors that determine the winners and losers in legislative negotiations in the EU. Jonathan Golub considered member state bargaining success and argued that smaller states do comparatively better than larger states. Stuart A. Brown argued that the success of smaller member states in affecting the negotiation process might be because they take positions closer to potential winners in the first place.

My own research uncovers how negotiators behave during negotiations. I combine data on member states’ initial positions and final policy outcomes with a measure of the amount of interventions each member state makes over the course of negotiations. An intervention is defined as any explicit statement of disagreement with the Commission proposal at a particular point in the legislative process. These interventions are made by a member state at official meetings in Council working groups and in the Committee of Permanent Representatives (COREPER) over the course of negotiations for a particular proposal. They are important, as they act as a signal to other negotiators that a member state is dissatisfied with a particular part of the proposal and would like to see it changed.

Figure 1: Mean number of interventions at the Working Group and COREPER levels of negotiation 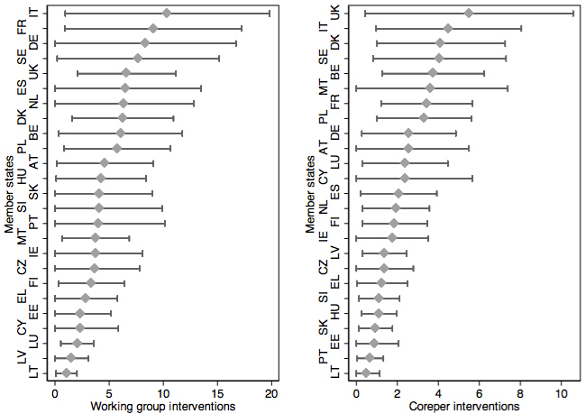 Figure 2: The relationship between interventions and member state bargaining success 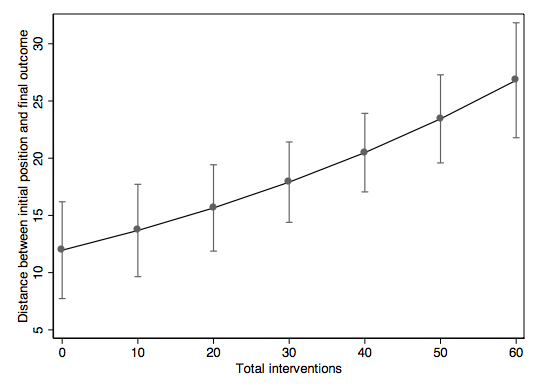 Some might see this as a surprising finding. The idea that more interventions imply less legislative bargaining success suggests that changing legislation through direct intervention is difficult. This in turn suggests that official Council meetings might be little more than a place where member states can register their discontent about expected policy outcomes, and the real negotiation determining legislative outcomes occur elsewhere. Indeed, when one watches the webcasts of Council meetings online, one gets the impression that negotiators are reading out pre-prepared statements rather than actually engaging in negotiation.

On the other hand, even if these official meetings represent a forum to publically state opposition to legislation through pre-prepared statements, this process itself can aid in holding decision makers to account. The fact that some public access is allowed to meeting records allows the public to monitor governments at the EU level. This potential for accountability is seen by many (but not all) as a good thing, and could in time lead to a more equal distribution of bargaining success across member states.

It is clear that further research into the manner that member states seek to influence legislative negotiation during the negotiation process is needed. A careful look at the content of interventions and their timing is appropriate, as the evidence discussed above does not account for these aspects of intervention behaviour. For instance, interventions relating to budget matters, sovereignty, and other salient issues are likely to have more influence than those relating to more technical issues. Similarly, one would expect that interventions made at the beginning of negotiations before consensus begins to form will probably be more influential than those made after significant progress towards agreement has been made. The above research represents a first step at uncovering these factors, but considerable work remains to be done.