On 19 April, the EU brokered a deal to normalise relations between Serbia and Kosovo. This deal has been opposed by leaders in the majority Serb area of Northern Kosovo, but this view may not be shared by the population, argues Jelena Obradovic-Wochnik. She writes that the potential for EU membership and a pragmatic coexistence with Kosovo means that North Kosovo Serbs may have greater job and economic opportunities; opportunities which may become more important than already weakening political loyalties.

Last month, Serbia and Kosovo reached an agreement on ‘normalisation’ of their relations, following protracted EU-led talks. No official version of the agreement appears to have been published yet – but most analysts have been referring to this leaked version. The highlights of this agreement include a provision for a ‘Community/Association of Serb majority municipalities in Kosovo’, created by statute, and which will have ‘full overview of the areas of economic development, education, health, urban and rural planning’ as well as ‘other powers’. Other important points include the agreement on one police force in Kosovo, as well as a promise to that neither side will block each other’s EU entry.

On the one hand, the agreement appears pretty comprehensive, but on the other hand, it has puzzled some observers: what, if anything, will actually change as a result of it? As many will point out, Serb majority municipalities, under Kosovo’s decentralization laws, already have significant powers to run their own affairs in e.g. education. However, as it is also evident, most of the Northern municipalities do not seem to be using these competencies as much as they rely on Serbian financing, Serbian laws and Serbian institutions to run their affairs. Being largely beyond the control of Kosovo and Serbia, the North, in many ways, already acts as an independent ‘Community/Association’ with no clear rules.

What emerges from the North is often alarming, or alarmist. As the Kosovo-Serbia negotiations unfolded earlier this year, there were a string of minor explosions throughout the North, followed by protests composed of the residents of the northern municipalities of Zvecan, Mitrovica, Zubin Potok and Leposavic, and the creation of a ‘Civilian Defence Corps’. These have also been accompanied with strong, nationalist rhetoric from the Mayor of Mitrovica, Krstimir Pantic, whose anti-EU narrative is strongly reminiscent of the Milosevic era. He has recently stated that “We are sending a message to the enemies of the Serbian people that we will not surrender and allow them to seize Kosovo’. Much of this rhethoric is directed at both the Kosovan state and authorities as well as Serbia and its participation in the EU-led talks.

But, as a recent article correctly points out, the Northern Kosovo population itself is far from their usual representation as ‘extremists’ and ‘criminals’.  Yet, surprisingly little is known about the political loyalties of North Kosovo Serbs. Are they really likely to boycott implementation of the agreement? Whilst their leaders – whose legitimacy is disputed –  may push for this, it is far more likely that the population of the North will adapt to the new realities in order to facilitate a more pragmatic (co)existence with Pristina. This has been increasingly the case with Serbs south of the Ibar river, who are much more isolated from other Serb communities.

Some evidence of North Kosovo Serbs’ political loyalties can be seen in the votes they cast in the 2012 Serbian parliamentary and presidential elections (they generally do not vote in Kosovo elections). First, as the official results indicate, shown in Figure One, the participation levels of Kosovo Serbs in Serbian elections seem to be dropping. 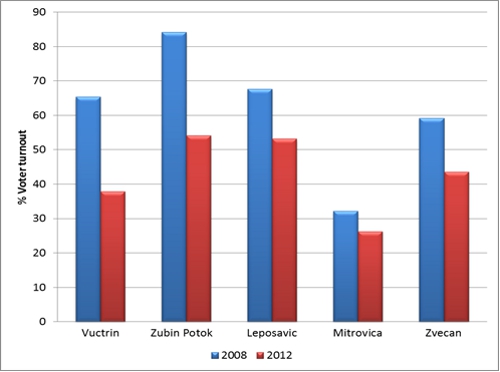 Another key trend, shown in Figure 2, is the relatively improved performance of Boris Tadic’s Democratic Party (as part of the Choice for a better life coalition) and the almost complete lack of votes for non-mainstream and extremist parties (such as the cleric-nationalist ‘Dveri’) is interesting – it demonstrates that support is moving away slowly from parties which make strong claims about Kosovo and emotional appeals to Kosovo Serbs.  The political support of Kosovo Serbs voting in the Serbian elections is still concentrated amongst the conservative parties (Serbian Renewal Movement; Democratic Party of Serbia and Dacic’s Socialist party), but it is beginning to fragment. In short, Kosovo Serbs’ loyalties to Serbia’s nationalist parties, are not as strong as they may first appear. 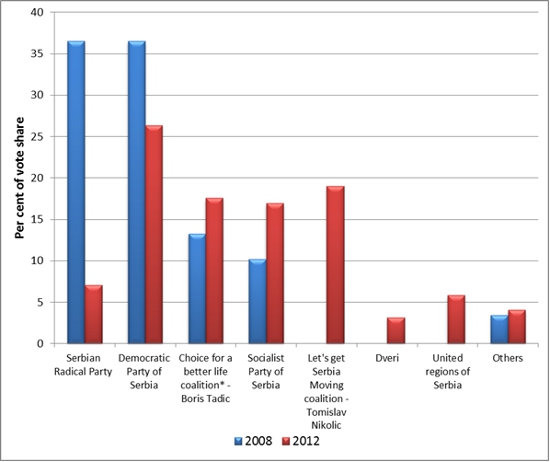 What, then, does this mean for the Kosovo-Serbia agreement? The narrative in Serbia at least, has moved towards discussing implementation. This is a key puzzle in the agreement itself, as it is not clear how many of those points will work in practice. Clearly, much of the ground will have to be prepared by political elites in Belgrade and Pristina. Local elites such as the Northern mayors may block implementation in various ways. However, the local populations are those that stand to benefit from any agreement which unblocks Kosovo-Serbia relations. Northern Kosovo Serbs may, politically, prefer to be a part of Serbia, but this may change soon as the agreement is largely interpreted by Serbian critics as a ‘sell out’ and an abandonment of Kosovo Serbs.

Serbia does not have the financial means to keep supporting North Kosovo (perhaps one of the key reasons for its unexpected support of this agreement?). As it now hopes that the agreement will unlock EU membership – something on which the current government has suddenly made its priority, having been, in the past, somewhat more ambivalent about accession – it is likely that it will start to meet other demands, such as the dismantling of parallel institutions in the North. The absences of these – schools, hospitals, municipality offices – and the jobs and finances it provides, will also translate into Serbia’s lessening influence on the ground. Eventually, it is envisaged that Kosovo or ‘Community/Association’ institutions will replace these. Either way, the Serbian population of North Kosovo, is much more likely to approach the issue with pragmatism and look to the instructions providing them with jobs and real prospects, than follow any rhetoric of Northern mayors, for the sake of political loyalties.

Jelena Obradovic-Wochnik – Aston University
Jelena Obradovic-Wochnik is a Lecturer in Politics and International Relations at Aston University. Before joining Aston, Jelena held visiting fellowships at the Aleksanteri Institute, University of Helsinki and the European Union Institute for Security Studies.  Her research interests include Serbia-Kosovo relations and transitional justice. She is currently a Visiting Fellow at the Centre for European Studies, Harvard University.