The European Parliament is often accused of being distant from EU citizens, both geographically, and in its decision making. Many have also accused it of lacking newsworthiness, but is this actually the case? Katjana Gattermann has closely examined broadsheet news coverage of the European Parliament. She finds that, while not independent from the domestic arena, there is a steady and predictable supply of news on the European Parliament, implying that it is a newsworthy and essential part of EU broadsheet coverage.

The European Parliament (EP) plays a key role in the EU political system. It is the only directly elected EU institution and takes decisions in a wide range of policy areas which affect the daily lives of European citizens. However, the EP is often accused of being unable to link to those it represents. Brussels and Strasbourg, the two seats of the parliament, are geographically far away from many EU citizens, and the EU decision-making process is quite difficult to follow for those who are less familiar with EU politics. Here, the mass media are able to step in: they transmit news, information and commentary to European citizens and are able to affect their awareness and opinion of EU politics; and vice-versa they give citizens a public voice towards their representatives. Given the crucial, legitimising role of the mass media in the EU political system, to what extent do European broadsheets report about the EP during non-election times and which factors explain variation in news coverage?

My research suggests that the EP receives regular news coverage which closely follows the parliamentary calendar. This comes quite unexpectedly since the EP has not been given much credit for its newsworthiness in the past. Previously, a lack of media attention was arguably due to its former, limited powers, the rather complex internal procedures and lack of political contestation in plenary debates. However, my research suggests that newsmakers’ interest in covering the EP on a regular basis has grown over the past few years alongside its more comprehensive powers and increasing party conflict along traditional left-right lines.

What is to be expected, on the other hand, is a considerable degree of cross-country variation in EP news coverage which is most notably due to the absence of a common European media system and lack of a European public sphere. More specifically, this variation can be explained by developments in the domestic arena. Newsmakers respond to their readers’ interests because ultimately they want to sell their stories. Consequently, they take public opinion towards the EU as well as public trust towards the respective national parliament into account when reporting about EU parliamentary affairs. Their EP news coverage is also likely to be influenced by the degree to which the EU is contested in a domestic party system, following  research on the 2009 EU elections by Schuck et al. (2011); and that national general election campaigns are likely to undermine EP news visibility since the former are supposedly more salient in the short term.

To investigate EP news coverage, I selected 2155 articles that were published in 18 broadsheets in six EU countries: Ireland, the UK, France, the Netherlands, Germany and Austria and that were either about the EP or referred to its activities or its members several times. I considered two legislative cycles (October 2005 to September 2007).

One important finding of my research is that EP broadsheet coverage follows the parliamentary calendar with increasing coverage during the winter months since the EP is, like most parliaments, most active after the legislative summer break (see Figure 1 below). European affairs have often been criticized for being lengthy, complex or irrelevant and thus would not receive regular media attention. My findings, however, demonstrate that there is a steady and predictable supply of EP news which implies that they are newsworthy and an essential part of EU broadsheet coverage. The figure also shows that the cross-country variation is biased towards the German sample with a larger amount of publications (641) than for the other countries. British (204) and Austrian newspapers (269), on the other hand, report least often about the EP. So what explains this variation? 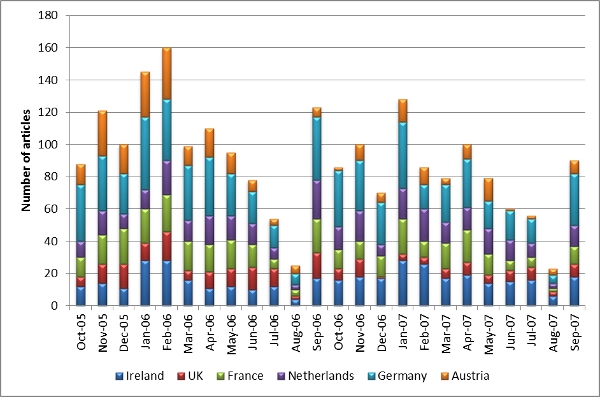 For the explanatory analysis I use the percentage of pure EP news within articles as my dependent variable. I also account for all days a broadsheet didn’t report anything about the EP by adding artificial news articles (zero observations) resulting in a total N of 10847. The key independent variables measuring public opinion derive from the Eurobarometer; to calculate party political contestation I rely on Schuck et al. (2011) and use Chapel Hill data. National elections fell into the period of investigation in France, the Netherlands and Austria and I estimate their effect as distance in months to the publication date.

My findings show that the news visibility of the EP increases with rising levels of public support for EU membership with rather pro-European citizens being supposedly more interested to read about the EU and the EP in particular, although a reverse effect is also probable. That explains, for instance, why the EP receives less attention by the quality press in Austria and the UK, where the public is more sceptical towards EU integration. I observe a different effect with respect to public trust in the national parliament. One would expect that if citizens appreciate parliamentary democracy in the domestic context they should also express more interest in receiving news from the EP. However, I find that EP news coverage is negatively affected by higher levels of public trust in the national parliament. This suggests that the public – and the press – regard the EP as a ‘second-order institution’ (Desmet et al. 2012) compared to the national parliament. On the other hand, even though EP elections are also considered second-order to national elections, further tests show that national general elections do not compromise EP news visibility: its coverage remains at a high level in the run up to and during national elections. This implies that, contrary to initial expectations, the EP and its members are relevant for the domestic campaigns, although precise Europeanization effects have yet to be investigated.

My results further show that plenary meetings trigger EP news coverage considerably. It demonstrates that plenary debates and votes matter for broadsheet coverage despite accusations of lacking heated political debates. However, higher levels of party political contestation over the EU at the national level are related to lower EP broadsheet coverage. This is surprising as domestic party contestation extends towards the European level via party channels. The British Conservatives, for instance, debated their break from the European People’s Party during the time of investigation.

This research not only has implications for further research on EU news coverage, which thus far has predominantly focussed on key events and issues, but also for parliamentary democracy at the EU level. The finding that EP news coverage is of a regular nature – even during national election campaigns – enhances the chances for citizens to take note of what their EU representatives do. Although I only looked at the quality press, this finding is highly relevant for the legitimacy of the EP. On the other hand, since EP news coverage is not independent from public opinion it is unlikely that public awareness of the EP is high where public support for EU integration is low and at times when the national parliament is held in high regard.

Katjana Gattermann – University of Cologne
Dr Katjana Gattermann is Postdoctoral Research Fellow at the University of Cologne. She holds a PhD from the LSE European Institute. Her research interests are based in the field of Comparative European Politics and Political Communication. She is particularly interested in the patterns, drivers and effects of EU news coverage and also works on legislative behaviour and the relationship between represented and representatives in and across Europe. She is currently a member of the OPAL research collaboration (‘Observatory of Parliaments after Lisbon’).