France has a raft of labour-market regulations that kick in for firms with 50 workers or more. Luis Garicano and John Van Reenen use this threshold to identify the economic effects of size-contingent regulations. Such policies seem to subsidise small firms at the expense of larger firms. But since small firms are on average less productive than large firms, the French economy loses out.

Slow growth in Europe has led to a debate over whether structural reforms can be used to raise productivity. Many countries have tough labour regulations which may be a barrier to growth. Quantifying the welfare costs of such regulations has proven elusive, however, and policymakers are reluctant to spend scarce political capital reforming labour laws when the benefits are uncertain and vociferous opposition is assured.

In recent work, we have provided some simple methods for ‘costing up’ such regulations and applied it to the case of France. Once French firms reach a threshold of 50 workers they are hit by a tsunami of labour regulations – they must form work councils, give more union representation, face higher firing costs, and so on. As so often in empirical work, what’s bad for the economy is great for the empirical economist. The fact that these regulations depend on a precise size threshold gives researchers a powerful tool as firms should respond in predictable ways.

First, many firms will choose to remain below 50 employees to avoid the cost of the regulation. We can see exactly this in the data (Figure 1). Since Gibrat’s classic work in 1931 (on French industrial firms) economists have shown that the firm-size distribution follows a ‘power law’ across every country. There is a log-linear relationship between the size of the firm and the number of firms. But in France, this power law is broken at exactly 50 employees. There are also some less severe regulations when a firm gets to have ten employees creating a second, smaller jump. 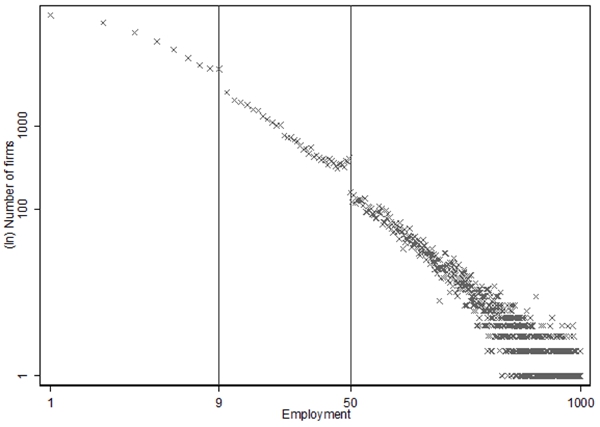 Notes: This is the population of manufacturing firms in France with between one and 1000 employees. This plots the number of firms in each exact size category (i.e. raw data, no binning). As shown in Figure 2, below, there is a clear drop at 50, but also at ten employees. These thresholds correspond to various size-based regulations.

Since more efficient and productive firms will become large, what Figure 1 shows us is that there is a margin of French firms who, despite being productive enough to grow beyond 50, are choosing not to in order to avoid the regulation. In other countries such efficient firms would grow, but in France they are incentivised to remain small by the regulatory ‘tax’. Some very productive firms will choose to pay the tax and grow: if I could sell enough to employ 10,000 workers then I am not going to stay at 49 workers just to avoid the tax. But such firms are still paying a cost.

Figure 2 – The relationship between productivity and firm size 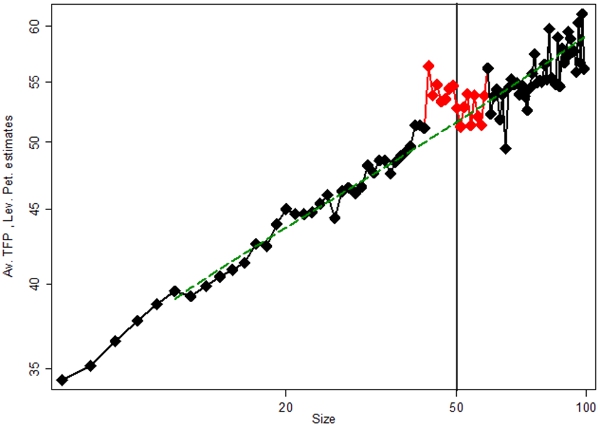 Notes: This figure plots the mean level of total factor productivity by firm employment size between one-employee and 100-employee firms. A fourth order polynomial is displayed in both panels using only data from the ‘undistorted’ points (potentially ‘distorted’ points are shown in red).

Like any tax, some of the regulation may be borne by workers in the form of lower pay, mitigating some of the distortion. But in France there is a lot of wage rigidity (almost 90% of workers are covered by a union bargain). Hence, their burden of adjustment is likely to be through unemployment rather than low wages. We calculate that the welfare loss primarily comes from this unemployment causing a loss of some 4% to 5% of GDP.

And this is just one set of regulations for the 50 employee firms. There are many others. Indeed, the scale of regulation is much tougher in other countries, such as Portugal or Italy, where firms above 15 employees are faced with many additional laws.

The net effect of these size-contingent regulations is to subsidise small firms at the expense of larger firms and of workers and to make it difficult for smaller firms to grow. Small firms benefit from the lower wages the regulation induces without having to pay the regulatory costs. But since small firms are on average less productive than large firms, this creates a distortion. Voters are much more sympathetic to small businesses than big corporations, however, so they carry considerable political weight. The unusually high numbers of small and medium-sized enterprises in Italy, for example, is often seen as a badge of honour, rather than a distorted structure due to the costs of becoming large.

Many recent studies have emphasised how the failure to allocate more output to better managed and more efficient firms is a major factor in holding back the aggregate productivity of European and Asian economies compared to the US.  Bloom, Sadun and Van Reenen (2013) for example argue that half of the total factor productivity gap between the US and southern EU nations such as Italy and Portugal could be bridged if these countries allocated jobs to the better managed firms as well as the US does.

But no country is immune. The US also has some size-contingent regulations and the Accountable Care Act is bringing in subsidies for employers with fewer than 50 employees, uncannily similar to the French cut-off. US wages and more flexible than in France; but unless Obamacare is carefully implemented, 50 may indeed be a tragic number.

This article originally appeared at voxEU.

Luis Garicano – LSE Economics
Luis Garicano is Professor (Chair) of Economics and Strategy, Department of Management and Department of Economics, London School of Economics. He is also Head of the Managerial Economics and Strategy Group and Director of the MSc. Economics and Management at the School, a Research Fellow at the Centre for Economic Performance (CEP), LSE and at the Center for Economic Policy Research (CEPR), as well as a researcher at the Fundación de Estudios de Economía Aplicada in Madrid. Professor Garicano received his PhD in Economics from the University of Chicago, where he was as well an Assistant, Associate and Full Professor, and a visiting Professor at MIT and LBS His research interests are productivity growth, labour economics, corporate governance and incentives, firm knowledge and capabilities, and law and economics. He is founding editor of Nada es Gratis, the most influencial economics blog in Spanish.