Why do different countries have different healthcare systems? Federico Toth looks at the three major types of healthcare systems in industrialised countries: voluntary insurance, social health insurance, and national health services (NHS). Using evidence from 15 countries, he argues that those countries with left-leaning governments tend to institute an NHS, while those who are right leaning or authoritarian tend to introduce a model based on social health insurance. He also finds that those countries where political power is concentrated on the government’s executive have a greater likelihood of introducing an NHS.

All healthcare systems – at least in industrialized countries – can be categorizes as being part of one of three basic models: 1) voluntary insurance, 2) social health insurance (SHI), or 3) national health service (NHS). These three models can be seen as three successive stages of a standard developmental path, structured into three successive stages. The first stage corresponds to the diffusion, as a supplement to the market, of forms of voluntary insurance. The second stage coincides with the establishment of the principle of mandatory insurance. The third stage corresponds to the establishment of a NHS. The standard path followed by different national systems is thus marked by two crucial passages: the first, from voluntary insurance to mandatory insurance; and the second, from social health insurance to a national health service.

Is there a link between the healthcare models adopted in different national contexts and the ideological orientation of the governments which have instituted them? This theme is already present to a large degree in the debate over the development of the welfare state in Western countries. The argument made by certain authors – which remains controversial – is that leftist parties have played a decisive role in the development and extension of the welfare state, in contrast with conservative parties, which have more often slowed its expansion.

To evaluate the influence of ideological orientation on the choices made in healthcare, it is useful to start from the legislative provisions adopted to establish forms of social health insurance in the different countries (at least for certain occupational groups), shown in Figure 1, below:

Considering the governments that have adopted such provisions, we find: conservative governments, which were not democratically elected (the Bismarck government of Second Reich Germany); liberal governments (United Kingdom and Norway); military governments (Japan); authoritarian regimes (Francoist Spain, Mussolini’s Italy, and Salazar’s Portugal); post-war (Belgium) or post-dictatorship (Greece) governments of national unity, led by a conservative prime minister; and in the Netherlands, the first scheme of compulsory insurance (1941) was imposed by the occupying German forces. Only in one country, namely Sweden, was social health insurance introduced by a social democratic government. In the other cases, it has been predominantly conservative or non-democratic governments that have introduced SHI schemes. One plausible explanation is that such governments (this holds particularly for countries with executives who are not responsible to the parliament) have used social legislation as a strategy to make up for their legitimacy deficit.

Turning now to examine the political colour of those governments that have established a national health service, the scenario appears quite different from the previous one. It is social democratic governments (including socialist and labour governments) which have, in the majority of cases been the promoters of an NHS:

Portugal and Italy are partial exceptions to this rule. In Portugal, the NHS was introduced during the transition to democracy by a presidential government, which was nevertheless led by a socialist. The Italian 1978 healthcare reform was approved by a government of national solidarity (a single-party Christian Democratic minority government with “external support” from the Communist party). The Communists made the health reform a necessary condition for their support.

With no pretensions to stipulating laws of a general nature, there does nonetheless seem to be a correspondence between healthcare models and ideological leaning. Social health insurance schemes have more commonly been adopted by conservative or non-democratic governments; conversely, the majority of laws instituting a national health service have been passed by social democratic executives. This obviously does not mean that such services have been instituted in all countries which have had leftist governments: in France and Germany, for example, Socialists and Social Democrats have governed for long periods without ever proposing the creation of a NHS. Nor can one affirm that all parties of the Right have systematically opposed the NHS model: in some countries, the institution of this model was the fruit of bipartisan accord; in others, once introduced the universal single-payer public system has ended up gaining a vast consensus and conservative governments have refrained from proposing its dismantlement.

The power of doctors and the strength of governments

For many authors, the choices made in the field of healthcare can be traced back to the balance of power between government and interest groups. Among interest groups, the one that has traditionally been the most combative and influential has been doctors. The dispute between medical professionals and the state is such that, on the one side, the state aims at limiting the autonomy of physicians and restraining their earnings. To this end, governments ought to prefer an NHS, or a highly integrated public system in which healthcare professionals are salaried employees. On the other side, doctors fight for their own professional autonomy and to gain a more favourable method of remuneration. In broad terms, physicians prefer to maintain the status of independent professionals, perceiving any attempt to ‘nationalize’ the healthcare system as a threat: of the three models, the NHS model is appreciated the least by doctors. Described thus, the preferences of the actors appear perhaps a little simplistic: the fact remains that medical associations have organized large protests in almost all those countries where an NHS has been introduced.

The choice of policy in the healthcare sector is often interpreted with reference to the characteristics of the overall political system. We may therefore judge that the result of the clash between medical professionals and the state depends, to some degree, on the rules of the political game. In those countries where political power is concentrated in the hands of the executive branch, such as the UK, it is more likely that the will of the government will prevail over that of interest groups (translated for the field of healthcare: the government has a better chance of implementing an NHS). Vice versa, in those systems where power is dispersed among multiple actors, the executive is weaker and interest groups find it easier to block its initiatives: in the field of healthcare, this means that doctors have a greater chance of blocking the approval of a system that they disapprove of (and thus no NHS). For example, some maintain that the US does not have a national healthcare insurance scheme not so much because successive governments have not wanted it, but rather because US institutions are designed in such a manner as to discourage comprehensive and radical reforms in the social field.

In debating the impact that the institutional design of a political system may exercise on the direction of healthcare policy, for each of the countries considered here, it is worth comparing two variables: the model of healthcare system adopted and the degree of concentration of political power, which are shown in Figure 3, below: 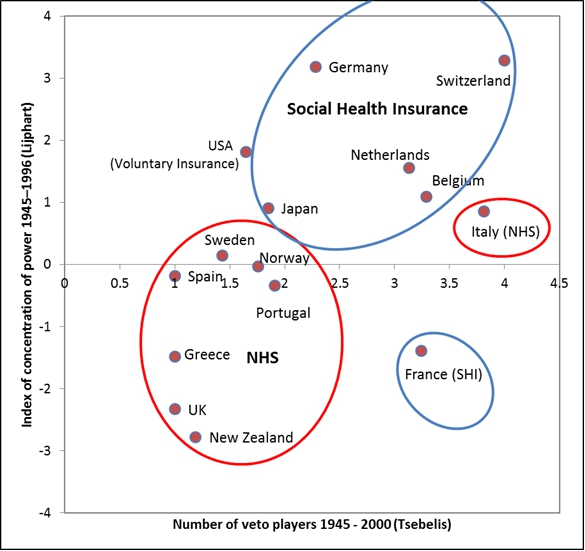 For the latter variable, we make use of two noted theories in the field of comparative politics. The first is the distinction between majoritarian and consensual models proposed by Lijphart, while the second is the veto players theory developed by Tsebelis. In this comparison, we take our previous argument into account, that SHI and NHS systems may be considered as the second and third stage, respectively, of a common developmental path. At the end of the Second World War, only one country (New Zealand) had implemented an NHS, whereas the other 14 countries either had an SHI or a VI system.

First, we considered the degree of concentration/dispersion of political power, based on Lijphart’s indicators and data. Those countries where political power is more concentrated  (shown in Figure 3 as more negative on the y-axis) have implemented, in the majority of cases, an NHS. It is perhaps not a coincidence that the two countries that first adopted an NHS (New Zealand in 1938 and the UK in 1946) are precisely those that most closely approximate to the majoritarian model. Conversely, those countries where political power is more dispersed (positive values) have generally maintained a system of VI or SHI. Among the political systems that are best characterized by the consensual model, we find the US and Switzerland, precisely those countries where the principle of compulsory health insurance encountered the greatest difficulty. The principal exception to this rule is France, which has a system of SHI despite the high degree of concentration of its political power.

Somewhat similar conclusions can be drawn if one puts Lijphart’s indicators aside and concentrates on the concept of veto players. Employing the same data set as Tsebelis, Figure 3 also shows the number of veto players (that is, individuals or collective units such as a president, or a political party who are required to support a policy for it to be accepted) during the period running from 1945 to 2000. As seen before, those countries with fewer veto players (less than two) have established, in the majority of cases, an NHS, while those countries with more than two veto players have generally maintained (or implemented) a system of SHI. The exceptions this time are Italy (which has an NHS despite the high number of veto players), and Japan and the US (which have no NHS despite having 1.85 and 1.65 veto players, respectively).

Despite these few exceptions (which could simply depend on the way in which the different authors define and operationalize the concept of concentration of political power), the choice of healthcare models seems thus to be affected, at least in part, by country-specific institutional settings.

This article is based on a longer paper, F. Toth (2013), The choice of healthcare models: How much does politics matter?, in International Political Science Review, 34 (2), 159-172