Economic divergences among Eurozone countries have played an increasingly important role in ECB decision-making since the start of the crisis.

Do national economic shocks, such as the debt crisis in Greece, influence ECB interest rate decisions? As Florence Bouvet and Sharmila King note, the ECB officially bases its decision-making on euro-wide data, rather than the situation in individual Eurozone countries. However, this ‘one size fits all’ approach may be inappropriate in cases where there are fundamental economic differences between individual countries. Outlining the results of a study into ECB decision-making, they find that national divergences, particularly among those in the Eurozone’s periphery, have played an increasingly important role during the financial and sovereign debt crises.

The recent economic crisis has reinvigorated the debate about the appropriateness of the ECB “one-size-fits-all” monetary policy rule. Indeed, while the ECB states that only euro-wide developments are considered in policy-setting, fundamental economic differences across euro-area countries may warrant deviations from this policy rule. As shown in figures 1 and 2 below, the inflation and output gap forecasts for periphery countries (Ireland, Spain, Greece, Italy, Portugal) had been, on average, a good one-percentage point higher than the core-countries (Belgium, Luxemburg, France, Germany, Finland, Sweden, the Netherlands, Austria) until the financial crisis hit. The study of the relevance of national considerations in the ECB interest-rate decisions is moreover fuelled by the fact that the ECB does not publish its minutes to policy meetings. A number of papers suggest that national market conditions could influence voting behaviour in the euro area. Diverging business cycles across member countries may, for instance, increase the probability of dissenting votes by national central bankers in the Governing Council as national biases increase. 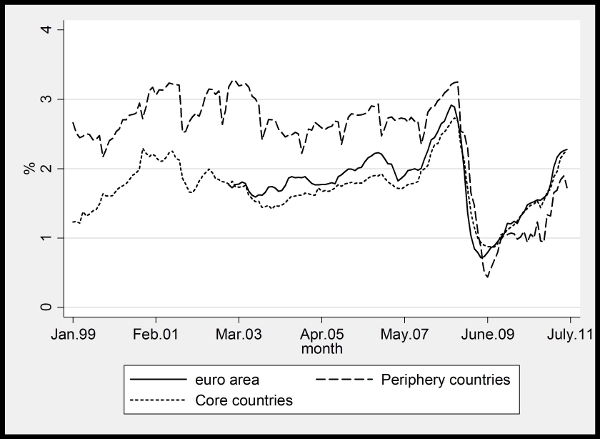 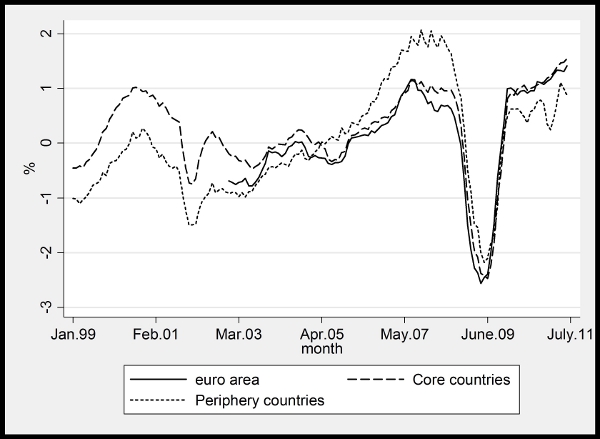 Following the recent sovereign debt crisis which has mostly affected countries at the periphery of the euro-area – Ireland, Greece, Portugal, and Spain – we test whether the ECB policy has been influenced by inflation and output gap developments in the periphery of the euro-area compared to the rest of the euro-area that we refer to as the “core”. For each subsample, we compute the mean inflation rate and output gap, and incorporate their deviations from the euro area average in a Taylor rule reaction function. To examine more specifically the response of the ECB interest rate policy to the euro-area debt crisis, we augment the Taylor rule with a measure of sovereign spread (calculated as the difference between the periphery/core countries’ ten-year government bond rate and the German ten-year Bund rate). We use monthly, real time, forecast data spanning from January 1999 to June 2011 (obtained from Consensus Economics and the ECB).

Figure 3 shows that the three inflation-forecast coefficients are stable and insignificant throughout the entire sample period, with the exception of a few months at the end of 2008 for the euro area inflation variable. The coefficient becomes statistically insignificant again by December 2008, when the euro area enters into recession. The coefficient on the euro output gap initially rises in December 2008 with the official beginning of the recession, before falling and stabilising by the end of 2009, as the sovereign debt crisis unfolds (figure 4).  While the coefficient on the core countries’ output gap is statistically insignificant until November 2010 when it becomes negative, the coefficient for the periphery countries progressively increases between November 2009 and October 2010, and then falls, maybe as a consequence of the establishment of the European Financial Stability Facility. 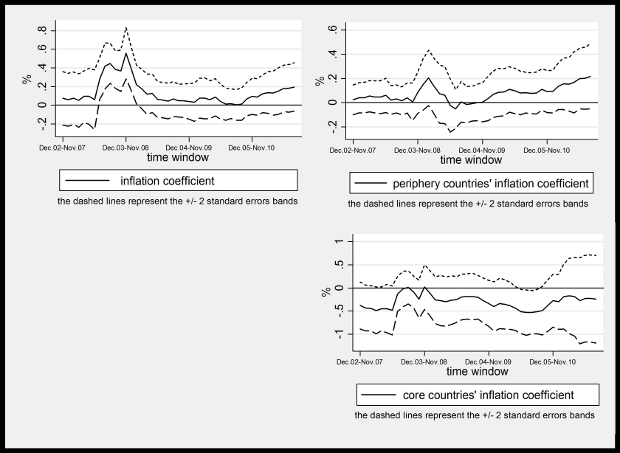 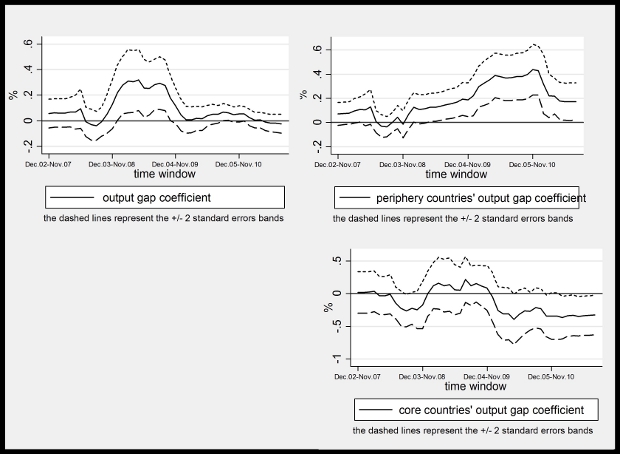 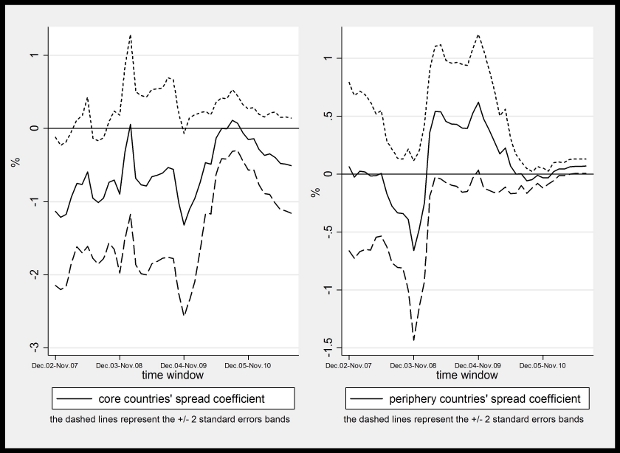 To summarise, we find evidence that divergences in national data, notably developments in the periphery, from euro area averages play an increasingly important role during the financial and sovereign debt crises.

For a longer discussion of the topic covered in this article see: Bouvet, F. and King, S. (2013), Do National Economic Shocks Influence European Central Bank Interest Rate Decisions? The Impact of the Financial and Sovereign Debt Crises. JCMS: Journal of Common Market Studies, 51: 212–231