One perceived problem for the democratic legitimacy of the EU is that linguistic diversity across Europe makes it difficult for there to be a viable European democratic community. Joseph Lacey assesses the potential for the EU to take inspiration from multilingual Switzerland in its attempts to strengthen the democratic legitimacy of the EU policy process. He argues that, much like Switzerland, the EU requires a more radical form of democracy to accommodate the diversity that exists between European citizens. He proposes a number of specific measures for improving EU democracy, including the capacity to hold EU-wide referendums, and making the European Commission open to electoral competition via the European Parliament.

For most of its near sixty year existence the EU has accumulated substantial governing powers without receiving much democratic input from citizens. Such observations have sustained decades of debate among academics and the upper echelons of European institutions in which the legitimate basis of the EU’s long-growing influence has been under question. Yet so long as citizens perceived the EU as benign or even as having a generally positive impact on their welfare, these legitimacy concerns only occasionally found resonance in daily national debates. 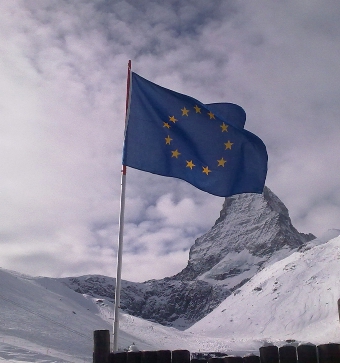 Enter the financial crisis and the EU is no longer thought to be delivering the goods. Citizens in both debtor and creditor countries are now pointedly asking key questions of legitimacy that strike to the core of the European project: why is the EU deciding who owes what to whom and how national economies should be run? In short, the financial crisis has exposed the EU’s legitimacy gap to the popular mind.

This gap cannot be unseen and, whatever the outcome of the financial crisis, it is reasonable to conjecture that the long-term future of the EU will in part depend upon its ability to improve on its democratic credentials. Though there are many ways in which this might be achieved, I suggest that analysing the Swiss way of doing democracy can be especially helpful in building a roadmap for legitimising the EU.

One remarkable feature of Swiss democracy is that it flies in the face of the conventional understanding of democratic community formation, which insists upon the necessity of a common language constituting a single public sphere in which politicians and citizens can communicate. Despite being divided by three linguistically delineated public spheres (German, French and Italian), with the large majority of citizens accessing media and engaging politically only in their own language, Switzerland has established itself and continues to survive as a highly successful democratic community.

Three major factors help to explain how Switzerland is possible. First, there are national elections and nationally-held referendums connected to the workings of a national government. Second, though national elections only take place every five years, referendums are far more frequent. On average, usually on three scheduled dates, Switzerland holds seven referendums annually. Some of these are constitutionally mandated, though the majority are demanded at the initiative of at least 100,000 citizen signatures. Third, unlike the case of Belgium where national consciousness is fragmented by two party systems divided along linguistic lines (French and Flemish), Switzerland has a single party system where the dominant cleavage is ideological, cutting across linguistic barriers and thereby allowing parties to draw common support from all public spheres.

These features of Swiss democracy contribute towards a process of discursive integration. Effectively, being governed by the same national institutions and endowed with the right to influence these institutions through the regular act of voting helps to synchronise the public spheres such that their inhabitants often discuss the same issues at the same time. The national structure of the party system, moreover, ensures that the way in which political debate proceeds doesn’t drastically differ from one public sphere to another so that they may be said to boast a shared system of meaning that is sufficiently strong to support a democratic community.

The EU’s degree of linguistic heterogeneity, with 24 official languages as of July 2013, is far greater than we find in Switzerland. Yet, as I believe the Swiss case shows, linguistic diversity is not a reason to shy away from democracy but to embrace it all the more. To form a genuine democratic community, in other words, the EU must solve its democratic deficit through more radical steps than have heretofore been seriously considered.

Broadly speaking, Europe’s legitimacy gap can be characterised by the fact that a) the European Parliament has little control over the European Commission once the latter’s members are elected b) aside from well-spaced out popular elections to the European Parliament, there is almost no other participation by the citizens of Europe in EU decision-making and c) insofar as there is a European public sphere it is not yet developed enough to make political debate visible to or inclusive of European citizens.

The EU may address the first aspect of its democratic deficit by making the Commission open to electoral competition via the European Parliament. This would have the effect of more directly connecting the Commission to European citizens while likely incentivising the formation of a European-wide party system divided along ideological rather than national lines. Essentially, trans-national parties will be required to convincingly claim to represent the people of Europe as a whole rather than a specific nation-state(s) if they are to receive enough votes from across the continent to contest power.

One significant way of increasing the participation of European citizens in EU decision-making would be to go well beyond the European Citizens’ Initiative recently introduced by the Lisbon Treaty – whereby one million citizens can make a policy recommendation to the Commission – by allowing for regular European-wide referendums.

The creation of a European-wide party system, directly connected to the main locus of power, and the possibility of European-wide referenda should improve the quality of Europe’s public sphere. Making EU institutions more open to citizen input would likely have the double-impact of generating a much greater appetite among citizens for European politics while motivating European-wide parties in competition for executive office to actively engage and inform citizens. In short, citizen power in a context of ideologically-based party competition should make European political debate more inclusive and increase the visibility of European institutions.

The overall effect of addressing Europe’s legitimacy gap through these measures, I suggest, would be to set in motion a process of discursive integration similar to what we find in Switzerland: where the public spheres are regularly synchronised in a way that builds up a shared system of meaning that may be vigorous enough to undergird a trans-national democratic community.