In April, a major Eurobarometer study reported that there had been a decline in support for the European Union across Europe, especially in countries where the Eurozone crisis’ effects had been most severe. Mariano Torcal takes a closer look at the reasons behind falling support for the EU in Spain and Portugal. Using panel data, he finds that a significant fall in trust levels for the European Parliament, rather than a sense of the EU’s responsibility for the economic crisis, has led to the drop in support for the EU. He also warns that this decline in support is unlikely to be reversed if the economic situation in Europe improves.

In the wake of the economic crisis that rocked Europe at the end of the 2000s, there has been a notable decline in general support for the European Union among citizens of member states.  According to some journalists, this decline seems to be most remarkable among those member states for which the effects of the crisis were most severe, such as Spain and Portugal. However, such a general statement hides the complexity of the dynamic, which has important implications for the European project.

To gain a more accurate perception of this attitudinal trend, we must ask more questions.  Is this decline consistent across all indicators of support?  Is it due to the economic consequences of the crisis or due to increasingly negative evaluations of representative institutions at either the national or supranational levels?  A comparative analysis of regional cross-sectional and panel data collected in Spain and Portugal shows that the decline in citizen support for the EU is rooted in a lack of confidence in the European Parliament as a representative institution. This decline is unlikely to remedy itself with the lifting of economic troubles.

Figure One – Attitudes towards the EU 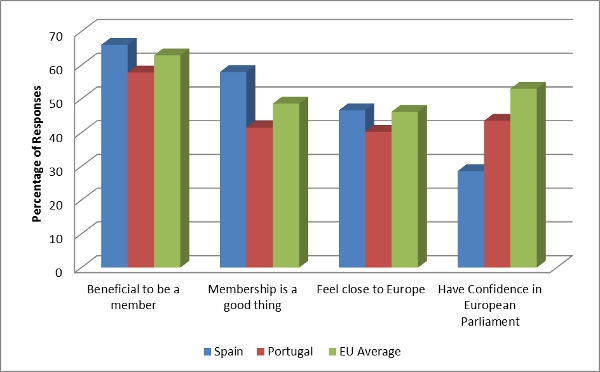 Looking at Figure One above, which shows the attitudes as gathered by Eurobarometer, it is obvious that the decline in citizens’ confidence in the European Parliament is much more severe than the decrease in general support for the EU among Spanish and Portuguese citizens, a trend that is not seen in the citizens  of other member states.  Between 2007 and 2012 in Spain and Portugal there was an important decline in general support for the EU. However, the percentage of citizens who believed that their country should abandon the EU was very small and did not increase.  In fact, the national mean attitudes of three indicators of general support for the EU (general evaluation, evaluation of whether it is beneficial to be a member, and how close to ‘Europe’ an individual feels) in Spain and Portugal are remarkably similar to, or even higher than, the regional means. This demonstrates that while general support for the EU may have declined in these cases, it did not reach a level lower than other member states. Where these countries did experience a notable decline in support that reached below regional means was concerning their opinions of the European Parliament.

What then is causing the deterioration of general support for the EU in Spain and Portugal?  Is it due to perceptions of the economic situation or due to attribution of responsibility of the crisis to either the national or EU governmental institutions?  Statistical analyses using panel data collected online over 2012 have helped to shed light on which of these causes may be the culprit.  To test whether or not citizens’ perceptions of the economic effects of the crisis are behind the decline, two variables were included in the models: 1) evaluation of the current economic situation in the country and 2) a personal index of the impact of the crisis. This second variable measured the level of worry regarding the crisis, as well as four possible causes of worry due to the crisis, including the ability to pay his/her bills, having a lower standard of living, loss of employment, and their ability to pay the rent or mortgage on his/her home.  Additionally, one possible factor contributing to the decline in general support could be related to the national governments, institutions and parties in power (the Partido Popular in Spain and the Partido Social Democrata in Portugal).  If citizens believe that their national governments or institutions are to blame for the crisis, they may transfer these feelings to the EU as well.

The results of the analyses confirm that while all of the variables caused some decrease in the mean level of general support for the EU, confidence in the European Parliament was the most significant factor across most models in both countries.  But most importantly, the two economic variables had little impact and the three variables regarding national political factors had an even smaller effect.  Although opinions of the national government showed a clear decline over time, they had almost no effect in explaining the diminishing support for the EU.  In other words, citizens are clearly distinguishing between what factors they believe are behind the crisis, which is creating a decline in evaluations of both national and European representational institutions, but are contained to their separate realms.  These findings also show that citizens are not only distinguishing between national and supranational institutions, but direct their dissatisfaction toward specific EU institutions, namely the European Parliament.  The attribution of responsibility for the economic crisis to the EU did not have as strong of an impact as did an individual’s confidence in the EU Parliament, demonstrating that this is more a crisis of representation between citizens and the EU institutions more than a lack of confidence and support for the EU in general.

While the relatively high overall level of support for the EU project in the midst of economic hardship could be taken as a positive implication of these findings, there is a darker side to the results as well.  As the most significant decline in support is due to a crisis of representation and not to evaluations of the current economic situation, this suggests that these lower levels of general support should not be expected to rise again with better economic times.  A change in the perceptions of how well the European Parliament represents the citizens of countries severely impacted by the economic crisis would likely be necessary to see general support return to its pre-crisis levels.

Mariano Torcal – Universitat Pompeu Fabra
Mariano Torcal is a Full Professor of Political Science at the Universitat Pompeu Fabra, Barcelona, and an Senior Adjunct Faculty at the Joseph Korbel School of International Studies at the University of Denver. Since 2001, he has been the Spanish National Coordinator of the European Social Survey. His main research interests include: Political Behavior, Political Culture and Political Attitudes, Social and Political Participation in New Democracies, Institutionalization of Party Systems, Mechanisms of Vote Intermediation, and Electoral Accountability. His latest books are The Europeanization of National Polities? Citizenship and Support in a Post-Enlargement Union (Oxford University Press, 2012), and Las Elecciones Europeas 2009 (Madrid: Centro de Investigaciones Sociológicas, 2012).

There is only a weak relationship between the way MEPs vote in the European Parliament and the preferences of their citizens.