Last month, the Democratic Left party left Greece’s coalition government, leaving PASOK and New Democracy with a razor-thin majority and the expectation of fresh elections for the country. Nikitas Konstantinidis argues that Greece’s political system has become much more fragmented in the wake of the crisis, with voters also now paying more attention to populist promises than parties’ ability to deliver change. Party competition in Greece has also been further constrained by the intervention of the EU and the Troika into domestic political life, severely limiting policy alternatives.

Despite a somewhat promising start, the coalition government of New Democracy (ND), PASOK, and the Democratic Left proved to be short-lived, giving way last month to a more compact bipartisan cabinet consisting of only ND and PASOK ministers (at an agreed ratio of two-to-one). Toiling under the shackles of a sclerotic austerity program, the first few true attempts at structural reform and downsizing of the wider public sector have met with mixed reactions and caused the three-party coalition government to implode. This is only the first episode in a new political era of short-lived coalition governments with shifting partisan compositions.

Does this necessarily pose cause for concern? Well, considering the fact that the prior well-entrenched two-party system was the main culprit for numerous misgivings in state affairs, this might seem as a welcome change. Complacency, a sense of impunity, and well-orchestrated political adversarialism were the hallmarks of Greek politics in the period leading up to the Big Crash. The ‘cartelization’ of the political market by two catch-all parties (PASOK and ND), who alternated in power throughout the era of the Metapolitefsi (1974-2012), was further bolstered by patronage politics and self-perpetuating clientelistic networks; once the public sector ‘bubble’ burst, this heretofore impenetrable system started crumbling like a house of cards. Party defectors were either left to linger as independents in the political wilderness or moved to smaller splinter parties on either side of the ideological spectrum (e.g., ANEL, DIMAR, SYRIZA). In an environment of increased political mobility, everyone is now jockeying for position and striving for political survival in anticipation of the next round of elections.

The Greek party system (among others in Europe) is currently undergoing a rapid process of fragmentation and polarization. In political science, the degree of party fragmentation is usually measured by the ‘effective’ number of parties in terms of the allocation of parliamentary seats and various power indices that measure the decisiveness of different parties in the formation of a majority coalition. According to the inverse sum of squared seat shares index, Greece was a solid two-and-a-half party system throughout the 1990s and 2000s (just like the UK). The shocking results of the May 2012 elections marked a rise in the ‘effective’ number of parliamentary parties to 4.83, which was subsequently consolidated to 3.76 because of the special strategic and highly politicized character of the June 2012 elections (with membership in the Eurozone hanging on the balance and an enormous amount of pressure exercised from Europe). Figure 1 below traces the evolution of the index over time (1990-2012). 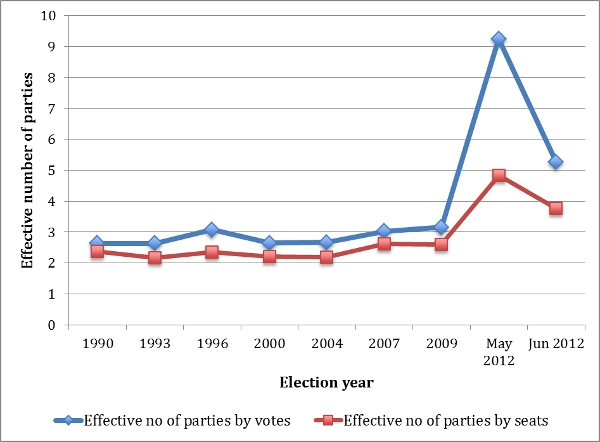 Concurrently, parties are becoming more ideologically compact, but also less effective in terms of the disbursement of political rents (‘pork’). The loss of heretofore loyal and steady ‘clienteles’ has shifted electoral competition from the dimension of valence to the level of rhetoric and ideology. Voters are now paying more attention to publicly proclaimed ideas and less so to parties’ ability to perform and deliver. Another emerging aspect in the strategic calculus of voting is parties’ perceived ability to be part of and to form viable and ideologically cohesive coalitions. On the other hand, the vote for anti-systemic extremist parties (e.g., Greek Communist party, Chrysi Avgi) and their uncompromising and obsessive attachment to a monolithic set of beliefs represents a form of protest against the coalition politics of a moderate center. Partisanship levels have plummeted; the political marketplace has become more open bestowing essential advantages to newcomers, while new partisan labels have become politically expedient as symbols of a break with a sinful past. Naturally, there is a significant learning curve involved in this transition to coalition politics. Henceforth, coalition governments are bound to become more durable and cohesive, as politicians are schooled in the give-and-take of coalition politics and appropriate mechanisms of compromise and consensus are gradually being put into place.

At the same time, the ideological space has become more constrained, in the sense that the extremes have converged and that credible and internally consistent programmatic proclamations now have fewer degrees of freedom. The decrease in the effective number of dimensions of domestic partisan competition is a direct consequence of the country’s international commitments and its position within a globalized and interconnected environment; membership, for example, of the EU and the EMU have given rise to an inescapable and concrete policy framework. Nowadays, ‘high politics’ effectively amounts to a small set of dichotomous choices and decisions with respect to the country’s position within a dense network of supranational governance. In that sense, the ad hoc Troika (European Commission, ECB, IMF) acts as a ‘censor’ of domestic political life. In light of the a wider consensus on Greece’s position within that network (or effectively on its overall level of openness), the most salient policies that trickle down to the regional and local levels are now ‘imported’ from or ‘imposed’ by foreign loci of power.

This self-imposed ‘straitjacket’ does of course generate a lot of frustration in the expression of the people’s democratic instincts, as they often feel handicapped in the face of global policy challenges that fall beyond the remit of the liberal democratic institutions of the nation state (see, for example, immigration, financial regulation, fiscal adjustment, environmental degradation, etc.). Such feeling of popular frustration is often voiced through heightened populist rhetoric that relies on (unfounded) assumptions about the intentions and interests of foreign governments, actors, and institutions, or even through mass movements of civil disobedience. In other words, the increased polarization, fragmentation, and popular delegitimization of the Greek political system are symptoms of the incompatibility of national democratic institutions with the country’s international position.

Nikitas Konstantinidis – LSE Government Department
Dr Nikitas Konstantinidis is a Fellow in Political Science and Public Policy in the Department of Government at the London School of Economics and Political Science. He is also a member of the Greek Public Policy Forum steering committee. He came to the LSE after spending two years as a post-doctoral researcher at the Institut Barcelona d’ Estudis Internacionals (IBEI). His main research interests lie in the areas of comparative and international political economy, applied formal theory, regional integration, international organizations, and European Union politics.

Why Greeks voted the way they did in the bailout referendum

The strain of international commitments has led to the erosion of democratic politics in Greece.