Public Affairs 2.0 say that Europe’s industries are increasingly concerned about the reliability of energy supplies, given recent moves away from nuclear power and a lack of a comprehensive EU energy policy. Real Time Brussels looks at the often frustrating delays in the handing out of radio spectrum allocations in the EU, saying that member states aren’t moving fast enough.

As the European Council and the European Parliament near agreement on the EU’s budget for 2014-2020, insightEU says that its structural funding should be redirected towards economically disadvantaged regions and vocational education, as well as to support small and medium sized businesses, which are major employers in Europe. The FT’s Brussels blog looks at lobbying in Brussels, writing that that the efforts of Google and credit card companies to convince the European Commission to change their stances on an antitrust case and credit card fees, respectively, have been more irritating than effective.

On Tuesday, the latest figures from Eurobarometer were released. Open Europe says that while the European Commission has said that the figures show that optimism about the EU’s future is on the up, there are some more negative figures, such as trust and approval for the euro that have been glossed over by the Commission. On Wednesday Décrypter la communication européenne looks at how the latest Eurobarometer may translate in terms of turnout for next year’s elections for the 2014 European Parliament. They say that the results may well confirm the trend of increasing voter abstention in the elections.

Over the weekend, German Finance Minister Wolfgang Schäuble wrote a guest editorial in Süddeutsche, arguing that he does not wish for a ‘German Europe’. Lost in EUrope takes Schäuble to task for this, writing that it is a denial of the crisis, and his own role in contributing to it. Still on Schäuble, One Europe comments on his visit to Greece last week, saying that Germany has increased uncertainty in Europe by pushing back the debate on further debt relief until after Germany’s September elections, and that Germany should step back from leading austerity programmes, especially as they do not have the consent of Greece’s citizens .Wednesday sees the release of new economic and manufacturing indicators that may show that the Eurozone’s recession is coming to an end. Open Europe argues that while the results are positive, we should not rush to celebrate as GDP growth remains fairly flat, and that many individual countries are still in recession.

Revolting Europe reports that the French Employers Association, MEDEF, has called for France to become a ‘tax haven’, through a reduction in labour costs and levies. French Politics has an intriguing inside look at the centre-right UMP party, whose leader Jean-François Copé has been trying, thus far unsuccessfully, to gather support from other senior politicians. His ambitions are made difficult by the fact that much of the UMP would like to see former President Nicolas Sarkozy run again in 2017.

Sunday sees Prince Philippe succeed the recently abdicated King Albert II as King of the Belgians. Coulisses de Bruxelles writes that the accession of the new King has sparked interest in Brussels and French speaking Wallonia, rather than in Flanders. Meanwhile, Debating Europe asks, Should Europe’s monarchies be abolished? Wednesday sees the birth of the future King of the UK, Prince George. The Verfassungsblog takes the opportunity to examine the constitutional arrangements in place should a King decide to abdicate.

Lost in EUrope says that Germany must invest the savings it has made on its deficit due to the lower interest rates caused by the eurocrisis. Meanwhile, Open Europe has an interview with Professor Bernd Lucke – leader of Germany’s new Alternative für Deutschland party. He argues that there must be a mechanism for countries to withdraw from the Eurozone.

As late as last week, Portugal’s government looked to be on the verge of collapse. Now, reports Open Europe, some stability has been restored, with President Aníbal Cavaco Silva having ruled out snap elections. However, the recent political conflicts may have undermined confidence in the country’s ability to carry out its bailout programme. Thursday sees economic and unemployment figures released in Spain. Nada es Gratis says that one by-product of the crisis is a decline in imports, and an increase in exports, which has led to a large drop in the country’s current account deficit. Meanwhile, Open Europe says that while Spain’s unemployment has fallen by 225,000 in the second quarter of 2013, much of this is due to fewer people looking for work and continuing large-scale emigration.

On Monday, the UK government released its first group of six reports in its ‘balance of competences’ exercise, which is aimed at auditing what the EU does and how it affects the UK. Open Europe takes a look into the report on the UK’s National Health Service, writing that the EU’s Working Time Directive has imposed large costs on the service, as well as affecting some other, often unexpected, areas. Meanwhile, Jon Worth says that the six documents all seem, at first look, to be ‘broadly sensible’.

EU Hemicycle, writing at Blogactiv.eu looks at the rise of the ‘Visegrád quartet’ of the Czech Republic, Hungary, Poland and Slovakia. They argue that this grouping might be able to outweigh Franco-German dominance in the EU and its future. EUkraine, at Blogactiv.eu looks at recent devlopments in the EU/Ukraine relationship, saying that the recent signing of an Association Agreement between the two means that Ukraine must do more to tackle domestic issues, such as corruption, if it wants to stay on the road to closer EU integration. New Eastern Europe looks at the history and recent resurgence of Ukrainian nationalism, and its effects on Poland and Russia’s attitudes to the country.

New Eastern Europe covers the conviction in Russia last week of Alexei Navalny, a prominent figure in the opposition movement to President Vladimir Putin. They write that the subsequent marches where thousands came out to protest the Navalny’s verdict show that if the Russian regime jails him, then they are risking a ‘Tymoshenko effect’ where a political prisoner becomes a symbol for the opposition, as was the case in the Ukraine. Contentious Politics Russia has a summer report card for Vladimir Putin. His handling of the opposition gets an ‘A’, his reaction to the Snowden spying revelations a ‘C’ and he gets an ‘F’ for the preparations for the 2014 Winter Olympics in Sochi. Meanwhile, One Europe compares movements against gay rights in Greece and Russia. Russia has instituted a new law against the promotion of homosexual ‘propaganda’, while Greek authorities have been harassing transgender women under the guise of ‘Citizen Protection’.

On Monday the EU  announced that it would no longer fund Israeli activities in the occupied territories. Kiels Prat in Europe says that despite Israeli resistance, the policy is a bold one, one that sanctions Israel’s violations of international law.

On Thursday, the FT’s Brussels blog suggests that there may be some light at the end of the tunnel for the EU’s trade dispute with China over solar panels, as the two parties may be on the verge of a minimum price agreement.

Moving away from its traditional topic of discussion (Spain), Nada es Gratis takes an in-depth look at corruption at the municipal  level in Denmark, and the methods used to measure it.

Chart of the week

Writing at Blogactiv.eu, Duncan Freeman looks at trade to GDP ratios over time in Europe, saying that Germany has become more dependent on trade during the crisis, meaning that the needed eurozone rebalancing has not yet occurred. 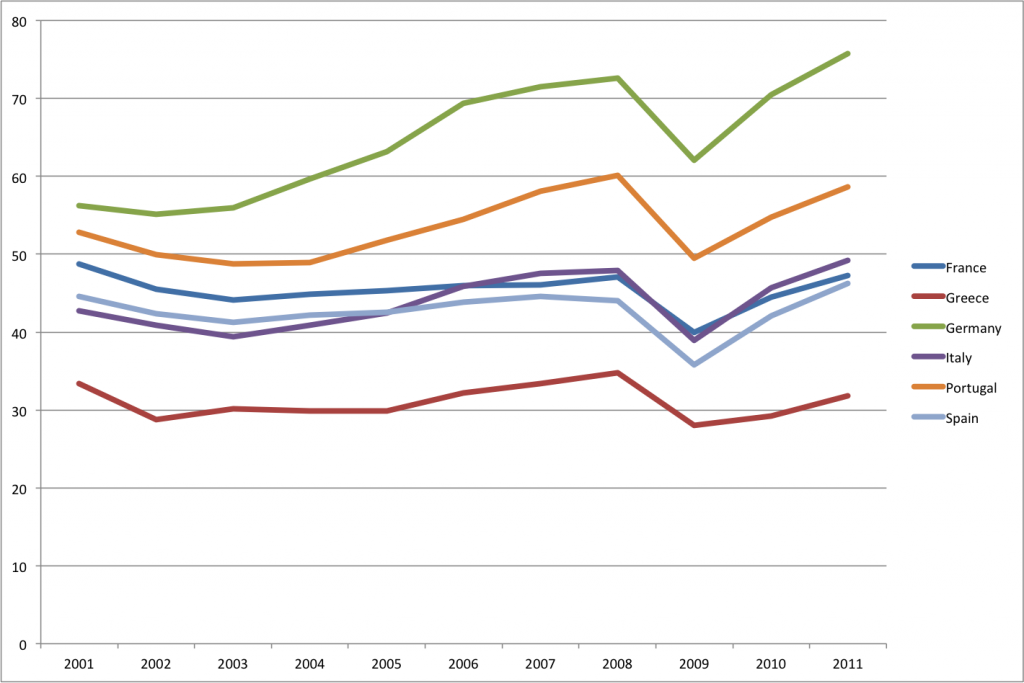 Jon Worth looks for the best way to track news on UK-EU relations.

The New Federalist praises the EU’s moves to reduce, and eventually end, roaming charges in the EU, as a ‘tangible act of Europe for its citizens’.