Do governments prioritise the interests of older generations over those of younger citizens? Pieter Vanhuysse outlines results of a study on ‘intergenerational justice’, with a particular focus on how Spain ranks relative to other OECD members. His results show that while Spain performs poorly on two measures – the impact of Spain’s ecological footprint on future generations, and child poverty levels – the country’s overall ‘intergenerational justice’ score is close to the OECD average. The impact of Spain’s economic crisis may nevertheless reduce this score in future if it exacerbates some of the existing inequalities within Spanish society.

Population ageing across the OECD has led to a renewed popular and theoretical interest in the notion of justice between younger and older generations. But efforts to measure intergenerational justice empirically have lagged behind. How can we improve policies when we do not know the state of affairs in terms of intergenerational justice in practice? At the request of the Bertelsmann Stiftung in Germany, I have developed a simple four-dimensional snapshot indicator to improve the cognitive toolkit of academics, journalists and policymakers: the Intergenerational Justice Index, or IJI. The aim is pragmatic and empirical: to compare intergenerational justice across 29 OECD member states. The unit of analysis is countries, and the IJI is a macro-level indicator linked primarily to government activity rather than private behaviour.

The snapshot was taken based on the years for which the most complete recent data was available for 29 OECD countries: the end of the 2000s or the start of the current decade, depending on the dimension. Sustainability is the moral starting point: ‘enough and as good’ ought to be left by each generation to the next. In ageing welfare states, population ageing as a demographic trend is viewed as an ethically neutral concept for our purposes. A society, or cohorts within it, is not morally blamed for lower fertility and longer life expectancy. But the way in which a country’s public policy packages react to demographic change is not neutral from an intergenerational justice perspective.

Three of the IJI dimensions measure policy outcomes that leave legacy burdens towards younger and future generations: (1) the ecological footprint created by all generations alive today; (2) early-life starting conditions as measured by child poverty levels; and (3) the economic and fiscal burdens on the shoulders of currently young generations as measured by public debt levels per person aged 0-15.

Compared to the other 28 OECD countries, Spain performs relatively badly on two of these dimensions. Spain leaves a relatively large ecological footprint that is much higher than its ecological capacity to absorb that footprint. Spain also reports the fourth-highest child poverty rates (15 per cent), just below those of the United States, Portugal, and Israel. Chart 1 below shows the percentage of children living in poverty (defined as living on an income less than 50 per cent of median equivalised household income). It also shows the ratio of child poverty to elderly poverty, where a figure below 100 indicates that fewer children are in poverty than the elderly, and a figure above 100 indicates the opposite. 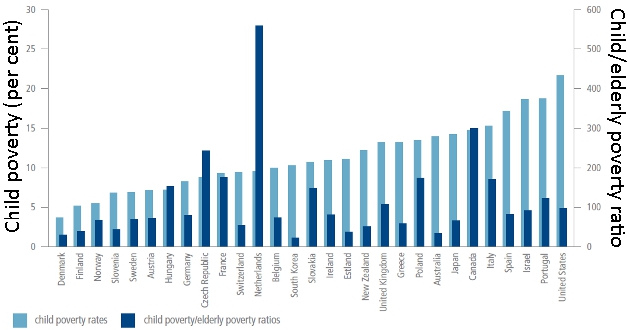 In terms of debt, every Spanish child shouldered a burden of around $150,000 (US) on his/her shoulders in 2011. This was a high debt burden, but nevertheless much below the burden shouldered by children in countries such as Japan, Italy, Greece or Belgium. However, rising Spanish state debt levels since 2011 are likely to further increase the debt burden to be shouldered by young Spanish citizens in the near future.

Intergenerational justice also demands that current policy efforts do not unsustainably favour one living generation over another. On the demand side, aging populations could lead to more pro-elderly policies – or even gerontocracy. I therefore develop a new measure of welfare states’ overall elderly bias in social spending, EBiSS. This fourth IJI dimension actually shows that demography is not destiny when it comes to social spending patterns. Of the OECD’s four demographically oldest societies, Italy and Japan showed a distinct pro-elderly bias in their social spending patterns in the late 2000s, whereas Germany showed only a moderate pro-elderly bias and Sweden showed relatively little bias. Chart 2 shows the ratio of elderly to non-elderly social spending for OECD countries. 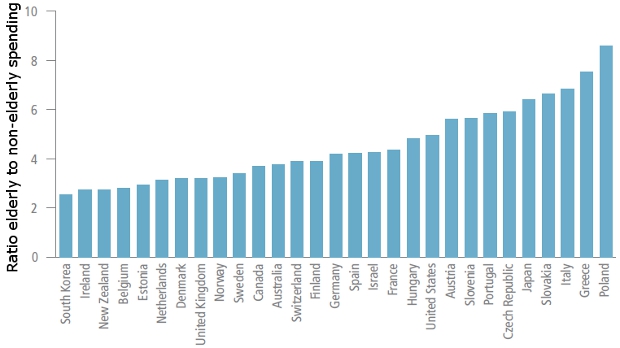 Spain again ranked in the middle of the pack in 14th place, with a relatively modest pro-elderly bias. The Spanish state spent about four times as much on every elderly Spaniard as on every non-elderly Spaniard. This is much higher than in countries such as South Korea, Ireland or New Zealand (2.5), but much lower than in Poland, Japan, Greece, Italy and Portugal (between 8.5 and 5.5). However, new cutbacks on education, family policies and active labour market policies are likely to have driven the pro-elderly bias of the Spanish welfare state upward in recent years. Still, in the demographically old Greece, the state spent seven times more for every elderly Greek as it spent for every non-elderly Greek. But in the comparably old Sweden, the state spent only 3.4 times more.

These four IJI dimensions are then aggregated into one synthetic IJI snapshot value, using a ‘benefit-of-the-doubt’ weighting method that maximally respects the revealed preferences of democratically elected governments. Overall, the most intergenerationally just OECD countries included Estonia, South Korea, New Zealand, and all of Nordic Europe. Spain again ranks in the middle of the pack, in 16th best (or 14th worst) position. By contrast, the least intergenerationally just countries included the USA, Japan, Italy, Greece, and Canada. Unless these low-IJI countries can somehow guarantee fast economic and productivity growth and rapid technological innovation in the near future, failing to reform current policy patterns would simply mean that a high degree of injustice would continue to be inflicted upon non-elderly citizens. Sticking to the status quo would be equivalent to perpetuating a bad deal for young and future generations. Chart 3 shows the overall IJI scores for OECD countries. 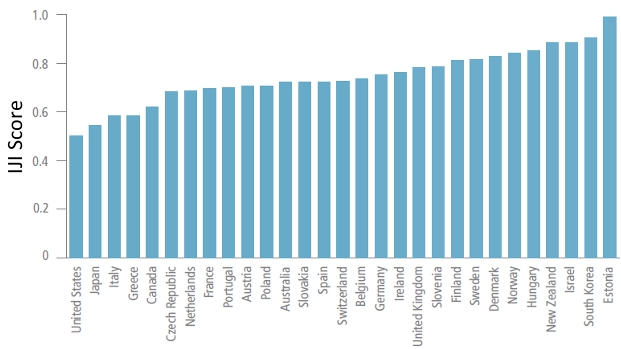 Note: Countries on the lower (left) end of the scale are less ‘just’ intergenerationally than countries at the higher (right) end. See full report for figures.

Seemingly ‘obvious’ policy measures that merit a new look in light of the IJI include fiscal and social security benefits or credits to reward family members for raising younger people and caring for elderly generations (often expending substantial private cost for societal benefit); the adjustment of official pension ages and pension benefits to rising life expectancy; and ecologically motivated tax frameworks such as carbon taxes. There is a particularly strong case for spending more on high quality early childhood education and similar social investment policies that increase human capital and skills and bolster the fiscal basis of ageing welfare states in the process.

But the hard power politics of population ageing matters crucially, too. When ‘obviously’ sound policies are not sufficiently supplied, wishfully thinking such policies into existence is clearly not an effective strategy. On the demand side of the policy process, the time is ripe for discussing the radical idea of giving each parent one half extra vote, to be used on behalf of each under-age child until that child reaches legal voting age. Such ‘proxy votes’ for children could be made conditional on parents guaranteeing minimum child welfare, and they could otherwise be regulated according to civic requirements such as, for instance, longstanding tax contributions. Proxy votes would add hard bite to the intergenerational power politics game, as they would change the incentive structure of elected policymakers in ageing societies.

Pieter Vanhuysse – European Centre for Social Welfare Policy and Research
Pieter Vanhuysse is Head of Research and Deputy Director at the European Centre for Social Welfare Policy and Research, Vienna (affiliated to the UN). His research on the political sociology of public policies and welfare states, intergenerational policy conflict, and population aging has been published in over forty journals including West European Politics, Public Choice, Political Studies, Social Policy & Administration, Journal of European Social Policy, Journal of Social Policy and Journal of Public Policy. He has co-edited Post-Communist Welfare Pathways (Palgrave Macmillan, 2009) and Ageing Populations in Post-Industrial Democracies (Routledge/ECPR, 2012). His book Divide and Pacify (CEU Press, 2006) was nominated for the American Sociological Association’s Distinguished Contribution to Scholarship Award for Political Sociology. He has a PhD from the London School of Economics and Political Science. Homepage: http://www.euro.centre.org/vanhuysse