The polarisation of public opinion has been an intensely researched phenomenon in the United States, but there has been relatively little research conducted on polarisation in European countries. Using survey responses from a large number of issue groups over the last 30 years, Simon Munzert and Paul C. Bauer outline the results of a study on polarisation in Germany. In contrast to the American case, they find that German public opinion has in fact become significantly less polarised over recent decades.

The campaign of the last general election in Germany in 2009 is considered to be one of the dullest since the foundation of the Federal Republic (FRG). Strategists of the two biggest parties CDU (the conservative Christian Democrats) and SPD (the Social Democrats) desperately searched for discriminatory features in their manifestos to present themselves as the better alternative. History repeats itself: Merkel’s main challenger at the upcoming election in September, Social Democrat Peer Steinbrück, once minister in Merkel’s cabinet of the Grand Coalition, is having difficulties finding an election issue which he can use to present his party as a true alternative and to turn the tide in his favour.

This difficulty stems from the fact that the two biggest parties in Germany have seen a general trend of ideological convergence. Interestingly, Germany’s citizens and their opinions are less well studied in this regard. We investigate whether this effect at the party level is also mirrored in German public opinion. For a wide set of issues, we find that there is indeed a clear observable trend of depolarisation.

How we assess public opinion polarisation

No society is free of conflict. It is an inherent feature of democratic systems that controversial issues are publicly debated. Political and societal groups take positions on certain topics, and legislative outcomes usually mirror the positions of those different groups to a greater or lesser extent. The rationale behind political polarisation is that if public opinion clusters strongly across many issues, it negatively affects a society’s ability to reach political consensus. If pro-abortionists and anti-abortionists hold contrary opinions, not only regarding abortion but also regarding issues such as the redistribution of income, women’s equality and many other policy fields, a society will be divided into two groups of people who cannot agree on any policy. If, in contrast, opinions regarding these issues are less correlated – that is, clusters change depending on the issue at stake – then individuals might disagree regarding one issue, but will able to cooperate and seek compromises regarding other issues.

To assess polarisation trends, we use a set of questions which form part of the German General Social Survey, a huge survey project that was conducted 17 times between 1980 and 2010. The questions we use were administered several times and taken together they allow us to investigate trends in the relationships between many question pairs. We can then identify several aspects of these trends, for example: Is the overall correlation between question pairs growing stronger (evidence for polarisation) or getting weaker? What are the trends regarding specific policy fields?

Our main finding is that polarisation has generally decreased among the German public. Our Figure below shows a coloured triangle graph with correlation trends of all issue pairs we observed between 1980 and 2010 (the item labels are explained in our article (ungated access)). Decreasing trends are coloured beige to red, and indicated with a “-” sign; while increasing trends are coloured light to dark green and labelled with a “+” sign. 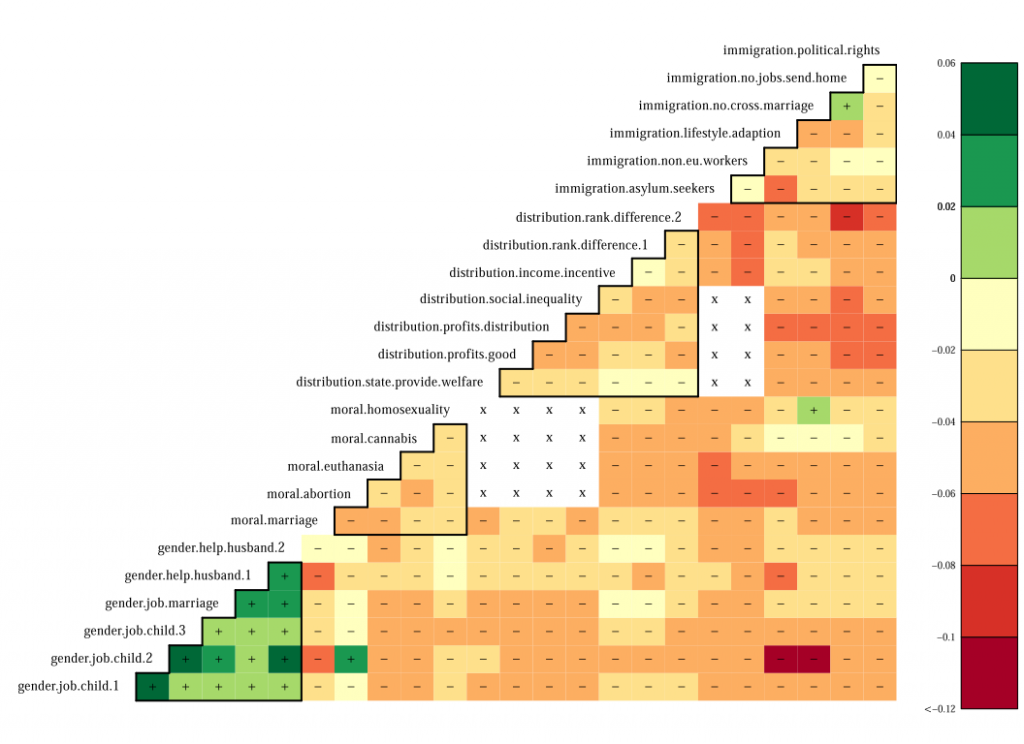 Note: Every label on the left side of the triangle represents responses to a survey question. The triangle is based on the extent to which responses to these questions are linked: for instance, those who oppose abortion might also have unfavourable attitudes to granting asylum to asylum seekers. Each square in the triangle shows whether this correlation between responses to two questions has increased (“+” sign) or decreased (“-” sign) between 1980-2010. See our article for the specific questions associated with each label.

What can be observed is that the correlation trend is negative for most of the item pairs over the last thirty years, but there is also interesting variation. In the lower-left corner is a set of items for which polarisation has risen. These items comprise what we call the “gender dimension” and include questions about the role of women in society – for example, whether mothers should care more about parenting than a career and whether a married woman should primarily support her husband’s career or have one herself.

This is a puzzling finding – on the one hand, recently debated topics like the introduction of female quotas or child care issues have certainly gained attention in the political arena and electoral campaigns as well, but they were not the most salient issues in any campaign. On the other side, gender equality might be one of the few remaining cleavages between the left and right camps in Germany, which have converged on many other highly debated topics such as unemployment assistance or the civil use of nuclear power. The rise of polarisation on this domain is in contrast with the other domains we investigated. This is shown in the Chart below. 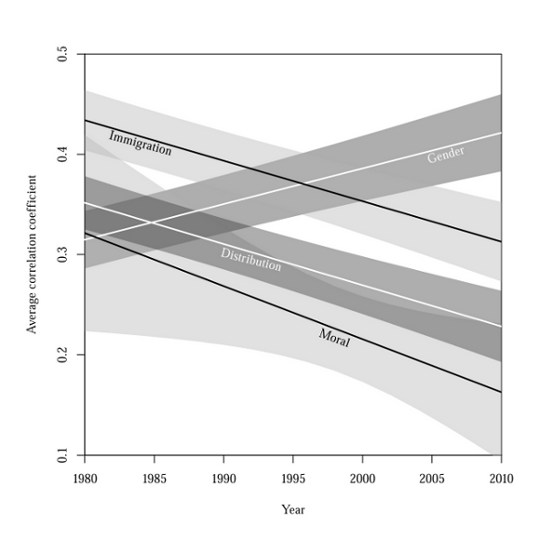 Note: The Chart shows the trends in correlation coefficients between survey responses grouped around different issues: “immigration”, “gender”, “distribution”, and “moral” issues. The line indicates the trend, within the bounds of statistical uncertainty shown by the shaded areas around each line.

Not much polarisation outside the United States?

Our findings for the German case contrast with evidence from the United States. In a similar analysis (using the method which we draw on heavily in our study), Delia Baldassarri and Andrew Gelman have shown that polarisation slightly increased from 1972 to 2004. On the other hand, recent studies on polarisation of mass opinion in the UK (Adams, Green and Milazzo) or the Netherlands (Adams, De Vries and Leiter) have, like our study on Germany, reported trends of depolarisation rather than polarisation. We hesitate to interpret existing evidence in this young research field as evidence for institutionally or elite induced movements in public opinion. Too little is known about the interplay between elite and mass polarisation.

However, our approach is useful for tracing general trends of opinion polarisation and identifying the rise and fall of polarisation on long-term issues. This could help our understanding of current movements which seem to have caught fire on single issues, like the conversion plans of the Taksim Gezi Park in Istanbul, protests against massive surveillance of internet traffic by intelligence agencies, or the recent protests against the Oresharski cabinet in Bulgaria, by placing them in a broader, temporal context.

Simon Munzert – University of Konstanz
Simon Munzert is a PhD student in the Department of Politics and Public Administration at the University of Konstanz. His research interests include political representation, survey research and electoral forecasting. Recent articles have appeared in Political Analysis, the International Journal of Forecasting and Political Science and Research Methods.