A number of policies aimed at tackling the problem of ‘NEETs’ (young people who are not in education, employment, or training) have been implemented throughout Europe. Miquel Àngel Alegre and Federico Todeschini assess the extent of the problem in Spain. They argue that as NEETs are a highly diverse group, it is useful to make a distinction between ‘vulnerable’ and ‘severely vulnerable’ individuals. They find that the most vulnerable NEETs are found far more frequently in families where neither parent has entered higher education, and that once young people find themselves in a NEET situation it is extremely difficult for them to escape it.

On June 27th, the same day the Heads of State and Government of the EU held a meeting in Brussels to discuss how to fight youth unemployment, experts from several countries came together in Barcelona to present their reflections and proposals on the problem of young ‘NEETs’ (young people who are not in education, employment, or training). They did so within the framework of an international seminar organised by Ivàlua (Catalan Institute of Public Policy Evaluation). A varied and broad number of topics were discussed at the workshop, ranging from the scope of the problem (youth unemployment, early school leaving, vulnerable young people, etc.) to the effectiveness of the activation programmes that try to tackle this problem (education and/or employment activation programmes). The workshop also produced a variety of conclusions.

One of these conclusions is that any action that seeks to be effective and efficient within this field must start with a correct diagnosis of the characteristics of their potential target group. In the case of young NEETs there is consensus that the conventional definition refers to quite a heterogeneous group of people. This definition, formalised by the European Commission and Eurostat, states that any young person who is currently not employed (either searching for work or inactive), is not studying and has not received any training in the four weeks prior to the survey (the relevant survey in Spain is the Labour Force Survey, known as the Encuesta de Población Activa) shall be considered a NEET.

Indeed, the situations of young NEETs are as diverse as the meanings and intensities that characterise their links or detachments from education and employment. Different ages (15-24 year olds are usually taken as the age group of reference), varying relations with work, mixed levels of motivation/disaffection, unequal training paths, and unequal family resources all combine to produce a wide range of fairly disparate situations.

Some experts have suggested that the way to deal with this heterogeneity is to make a distinction among young NEETS according to their level of motivation and their desire to tackle and overcome the situation in which they find themselves. Such a strategy would pay more attention to young inactive NEETs (who are supposedly less motivated) than to young unemployed NEETs (who are supposedly more motivated). Some proponents even go as far as to exclude the latter group – unemployed youths – from the NEET definition.

In our opinion, such an approach is inaccurate. On the one hand, providing an objective description of how motivated or willing people are regarding their future is not an easy task; this is even truer in the case of young people, whose attitudinal factors can be extremely volatile. What does seem clear is that attributing greater motivation to a young person simply because they have indicated in a survey that they are looking for a job is a somewhat crude exercise. On the other hand, we understand that both unemployed and inactive young people feel equally detached from the labour market and see their options equally compromised as they seek to make the transition to a self-sufficient adult life. 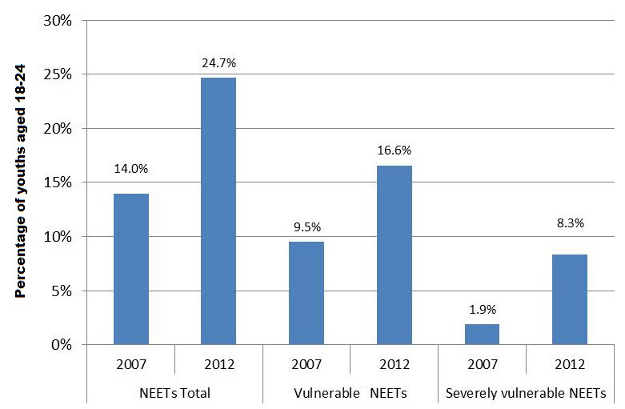 Source: Prepared by the authors, based on data from the Spanish Labour Force Survey.

Likewise, we need to be aware of the social-educational gradient associated with the incidence of the NEET phenomenon, especially where the most vulnerable individuals are concerned. The incidence of severely vulnerable NEETs rises to 14 per cent among young people from less educated households (where neither parent has participated in post-compulsory education). This is essentially four times the percentage corresponding to households where at least one parent has completed post-compulsory studies (3.6 per cent).

In short, young people from less educated homes are more likely to end up as NEETs. We should also bear in mind that being in a NEET position at a particular moment in time multiplies the probability of remaining as one, or being again in the future, especially among young people; this is the so-called scarring effect. To put it succinctly, the most disadvantaged or underprivileged youths are not only more likely to fall into a NEET situation, but once there, they find it more difficult to overcome this situation.

Accordingly, we can establish the following hypothesis: in the absence of effective policies and programmes to address the problem, the NEET experience tends to become chronic among the most disadvantaged sectors of society. Similarly, it will be difficult to design effective policies and programmes if this is not done on the basis of a systematic knowledge of the extent and complexity of the NEET phenomenon.

As Europe’s fiscal union marches on, it is time for the centre-left to debate what it can do to make the eurozone more progressive