The financial crisis has not affected all of the countries of the EU in the same way. Member states in the EU’s periphery are struggling with unemployment rates of over 25 per cent, while the core nations, such as Germany, have rates around 5 or 6 per cent. Using another currency union, the US, as a comparison, James Feyrer and Bruce Sacerdote argue that one of the EU’s major weaknesses is its lack of a mechanism for large fiscal transfers between states. In the US, Federal spending is progressive, and much more responsive to external shocks, meaning that there is a much larger degree of smoothing between states in terms of GDP and unemployment rates.

Several European Union countries remain mired in the deepest recession since the Great Depression, while others are doing relatively well. In June, Greek and Spanish unemployment rates stood at 26.9 and 26.3 per cent, while Germany and the Netherlands had unemployment rates of 5.4 and 6.8 per cent. Monetary union makes it impossible to craft monetary policy that can address these disparities. While fiscal policy might seem like the obvious answer, states like Greece are unable to borrow freely to finance expansionary spending and tax cuts.

This has led many policy makers (including the French President, François Hollande, and the Prime Minister of Spain, Mariano Rajoy) to call for much more serious fiscal integration across EU countries. One way to think about fiscal union in the EU is to consider another collection of states that are also members of a currency union, namely the US, and look at the differences in fiscal policies between the two. The first and most important fiscal difference between the US and Europe is the degree to which tax collections occur at the federal level. In the US, taxes collected at the federal level have ranged between 14 and 20 per cent of GDP for the last 50 years, with an average of 17 per cent. The European Union, by contrast, collects roughly one per cent of GDP.

The US level of tax collection makes it possible to finance large yearly transfers between states. Because the US Federal tax system is progressive, states with higher average incomes pay a much higher percentage of their income to the Federal government. In 2005 (before the Great Recession) Connecticut residents paid over $13,000 per capita to the Federal government, while Mississippi residents paid just over $3,000 per capita compared to a national average of $7,500.

Figure 1: Net Federal Spending versus State Income in the US ($USD) 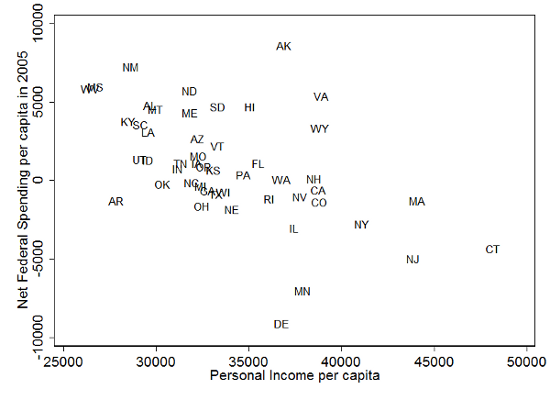 Note: See here for a list of the official abbreviations of US states.

Despite much talk of income transfers within the EU, European transfers are at most a few percentage points of GDP. The four largest net recipients in Europe, Poland, Greece, Hungary, and Portugal, all had net transfers of less than $400 per capita in 2009, an order of magnitude lower than the transfer to the ten poorest US states, as shown in Figure 2, below.

Figure 2: Net EU Spending versus income in the Eurozone ($USD) 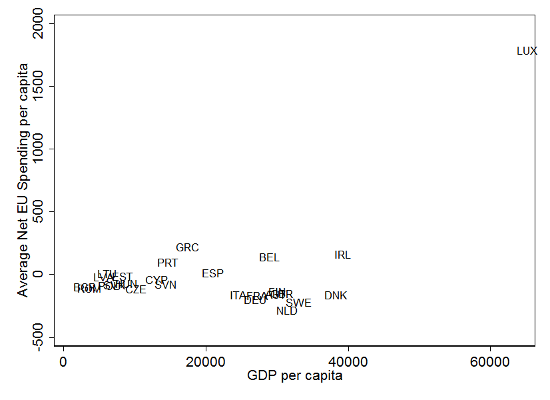 Transfers between states in the US are also highly responsive to state level changes in economic conditions, mostly through the progressive tax code. For every dollar that state level GDP falls, Federal taxes collected are reduced by 55 cents. If we assume a Keynesian multiplier of over one, this suggests that a significant portion of idiosyncratic shocks are smoothed by automatic tax changes. This is much less true within the EU, where a one euro fall in GDP only reduces tax contributions by about one cent.

US Federal spending is much less responsive to state level economic shocks, with one exception being the automatic stabilisers such as unemployment insurance. A one per cent increase in unemployment at the state level brings an additional $53 per capita of Federal spending on unemployment insurance. This is small in the context of regular US Federal transfers of thousands of dollars per capita, but large relative to EU transfers. We find no correlation between Federal transfers and local economic conditions in the EU.

The responsiveness of the US tax system to state level shocks provides a degree of smoothing between states in GDP growth and unemployment rates. The lack of such mechanisms makes such shocks more dramatic within the EU. Figure 3 shows the distribution of unemployment rate shocks for US states and Eurozone countries relative to the average.

Figure 3: US versus European Unemployment Volatility 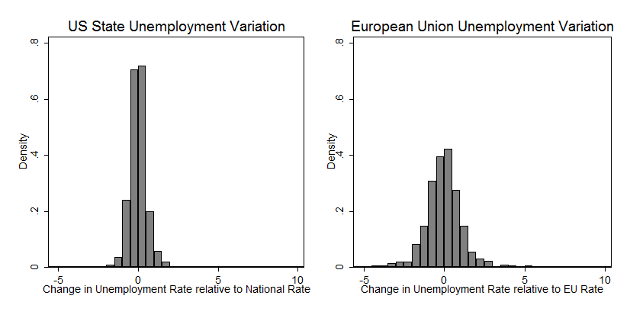 It is rare for a US state to see the unemployment rate change by more than 2 percentage points than the national change. European unemployment shocks can be 4 to 5 percentage points greater than the EU average. Whether lower US volatility is the consequence of counter cyclical fiscal policy (made possible by fiscal integration) or the result of smaller idiosyncratic shocks is an open research question.

Eurozone countries are in a difficult spot when it comes to responding to economic shocks that hit one country (e.g. Greece) harder than another. The countries within the Eurozone have the disadvantage of not being able to devalue their currencies separately in response to negative shocks. Unlike US states, these same countries cannot access large cross state transfers or automatic stabilisers via the tax and spending system. These are exactly the challenges that led some economists, including Martin Feldstein, to advocate against the Eurozone at the time of its creation. In order for a country like Greece to remain within the Eurozone, Greece will need to endure painful internal price and wage deflation (accompanied by a deep recession) that will render Greek goods and services wages competitive with the rest of the world.

Greece endured a 16 per cent drop in GDP between 2008 and 2012, while German GDP per capita has been roughly flat. In the US, cross state transfers via the tax system reduce tax collections by about 25 per cent of a shock. This is equivalent to Greece receiving additional transfers equal to roughly 4 per cent of GDP. This would amount to a transfer of €7.8 billion or roughly 6 basis points of the €12.8 trillion GDP. Assuming a conservative fiscal multiplier of 1 to 1.5, this would raise Greek GDP by 4 to 6 per cent. European fiscal integration of this magnitude may not be politically possible or even desirable. However, we think that the US provides one vision of what form a fiscal union can take in a collection of large diverse economies within a currency union.

For a longer discussion of this topic see the authors’ recent contribution to the American Economic Review.

Bruce Sacerdote – Dartmouth College
Bruce Sacerdote is a Professor of Economics at Dartmouth College. His research interests include an array of public policy issues, and bring the rigor of economic research to bear on such questions as the impact of education on income, health, and well-being; the effect of relocation after Hurricane Katrina on students’ educational outcomes; why there are fertility differences across developed countries; the incentives for criminal activity; and the life chances of adopted children living in different family environments.