Since Spain’s transition to democracy in the 1970s, the country has attempted to enhance its role in international affairs. Using data from the Elcano Global Presence Index, Iliana Olivié and Manuel Gracia assess how Spain’s international profile ranks relative to other countries. They note that Spain has increased its global presence ‘score’ substantially in recent decades, however much of this is based on ‘soft’ variables, such as tourism and cultural exports. As a result, Spain may require a new strategy to maintain its global position long-term.

The Elcano Global Presence Index (IEPG) is an index which measures the global presence of individual countries, based on three main fields. First, it ranks a country’s economic presence, including measures of exports, outward foreign direct investment, and other elements. Second, it assesses a country’s military presence, which is determined by the number of troops deployed abroad and the equipment it has available for deployment. Third, the IEPG includes statistics on a country’s ‘soft presence’, which is based on a wide number of factors including exports of cultural products, tourist arrivals, and the international activity of its academics. Chart 1 below shows the IEPG scores for European countries. 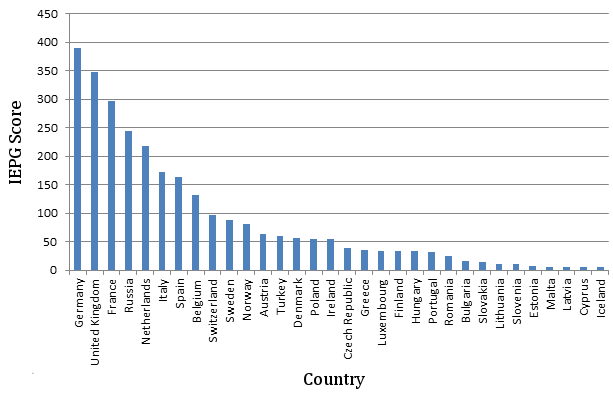 As shown in the chart, Spain is ranked below other large EU countries such as Germany, the UK, France, the Netherlands and Italy. Since Spain’s transition to democracy in the 1970s, Spanish foreign policy has been very active in attempting to reassert the country’s role in the international community, and this has also coincided with an accelerated globalisation process. The result was a spectacular increase in Spain’s IEPG score between 1990 and 2012, which virtually quadrupled over the period, from 41.8 to 162.8. Hence, Spanish foreign policy has clearly been successful, attaining its main target of returning to the international scene. Nevertheless, the strong growth in China’s presence in the 1990s and 2000s has caused Spain to drop from 10th to 11th position on the global presence ranking. Chart 2 shows the top 20 countries globally by IEPG score. 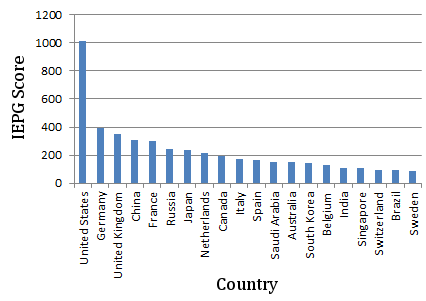 On the other hand, Spain’s presence rests upon its soft elements. Although the importance of soft power has decreased over the past few years, it still accounts for 50.4 per cent of Spain’s global presence. Such an important role could be an asset, but its best performing ‘soft’ variables reveal a low added value for both its productive model and international insertion. The Table below shows the contribution each variable has made to Spain’s IEPG score since 1990.

Table: Contribution of each variable to Spain’s IEPG score (percentage) 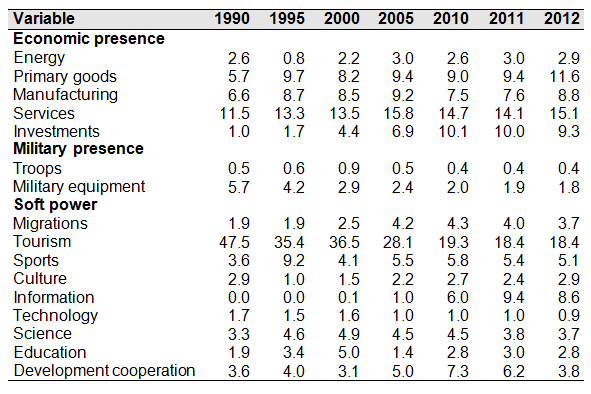 In terms of soft power, the tourism variable stands out as the main contributor to Spain’s presence, at 18.4 per cent in 2012. Nevertheless, the dependence of Spain’s international presence on tourism has been significantly reduced since 1990 when it accounted for 47.5 per cent of the total IEPG. The decrease is due to overall changes in the variable’s strength – with Spain declining from 2nd place for global tourism in 1990 to 4th in 2012 – and the lower growth of especially the economic variables, but also the increased presence of certain soft variables. Such is the case with sports, migration and information, together with the development of information and communication technologies in the past few decades. However, development cooperation – the basis for a good part of Spain’s internationalisation process over the past decade and until the outbreak of the Eurozone crisis – is different. In 2010 it accounted for 7.3 per cent of Spain’s total IEPG score, only to decrease to almost half that in barely two years.