France passed gender parity laws in 2000 stating that all political parties should include equal numbers of men and women on party lists. Priscilla Lewis Southwell writes that despite the new laws leading to an initial increase in female representatives, this growth has stalled in recent elections. She argues that one of the major reasons for this is that France also implemented a number of additional electoral reforms in 2003 which undermined the effectiveness of gender parity rules. She calculates that the reforms may have prevented as many as 38 female candidates from being elected since 2001.

France engaged in two inter-related, almost contradictory, types of electoral reform during the past decade – the introduction of gender parity and the structural reform of its Senate and European parliamentary (EP) elections. The latter reform served to thwart gender parity in several ways. The Raffarin electoral reforms of 2003 reduced the potential for the election of more female politicians, by the greater use of plurality districts in Senate elections. In addition, the change to regional districts for elections to the European Parliament created a situation in which male bias in party lists, even under proportional representation (PR), worked to the disadvantage of female candidates. Party proliferation, although not widespread in Senate PR districts, also reduced the number of successful female Senate candidates.

These developments help to explain why parity law has resulted, after one decade, in only a modest increase in the number of female officeholders in France. My research also underscores that quota provisions can be circumvented or minimised by other modifications of the electoral system, but it also confirms the extent to which incumbent officeholders go to considerable lengths to remain in office.

In 2000, a parity law was passed requiring all parties to present an equal number of female and male candidates on the party lists for those elections conducted via proportional representation (PR) – that is, the European Parliament, a majority of seats to the national Senate, and municipal and regional elections.

This gender parity law was first implemented in 2001, which resulted in the proportion of women town councilors rising from 25.7 per cent to 47.5 per cent in municipalities with more than 3500 residents. Similarly, in Senate elections, in those 74 races in which the parity law was applicable (those using PR) there was an increase from 5 to 20 female senators. In those 28 remaining Senate contests where parity was not directly applicable (those using a two-round plurality (TRP), the number of women stayed the same, at two.

From the standpoint of gender parity, the first set of post-parity elections appeared to be moderately successful. However, these initial gains in female representation appear to have stagnated. The percentage of women elected to the National Assembly has continued to rise, but only modestly so. However, the most recent European Parliamentary elections, and the 2008 Senate elections, have actually shown a slight decrease in the percentage of women elected to office.

As a possible explanation, we can turn to other electoral reforms that were adopted shortly after the parity law – the Raffarin reforms of 2003. Like most electoral reforms, the details are complicated, but these changes had an adverse effect on gender parity. In 2003, Prime Minister Jean-Pierre Raffarin, as leader of the UMP (Union pour un Mouvement Populaire) introduced laws that changed the method by which elections to the Senate and the EP are conducted.

Changes in elections to the European Parliament: even “zippering” didn’t help

Before these reforms, elections to the EP were conducted by PR, with the entire nation as the sole constituency, with national party lists. However, since 2003, there have been eight regional districts with distinct party lists of EP candidates in each district. Although these districts still use a PR method, this change can reduce the chances of female candidates being elected.

Specifically, although parity law requires party lists to alternate men and women (a ‘zippering’ system), a majority of party lists have been headed by male candidates. In those situations where a party receives only one or an uneven number of seats in a district, an imbalance occurs in the number of male and female candidates who actually fill those seats within their party. Although this imbalance is slight with one national constituency, as was the case in the 1999 elections to the EP, the potential for such bias against female candidates becomes larger as the number of districts increases.

For example, the Socialist Party captured 31 seats in the 2004 EP elections. If the country had been one nationwide district, as in 1999, at least 15 of these Socialist MEPs would have been required to be female by parity law. However, the disaggregation of the Socialist vote across the country meant that, in some of these eight districts, an uneven number of seats were won by the Socialists, resulting in a male bias. The actual Socialist delegation to the EP, following the 2004 election, was 18 male MEPs and 13 female MEPs, a loss of two potential female MEPs. The cumulative effect of such male bias for all parties was a net loss of six female MEPs in 2004, under these new rules. A similar pattern occurred for both the UMP and the Socialist parties in the 2009 EP election, but this male bias was offset by two smaller parties, the Movement for Democracy (MoDem) and the Greens (Verts) who, in contrast, had a female candidate heading their party list in three out of the eight regional districts.

It’s even worse in the French Senate elections

As noted above, the reforms for the Senate increased the number of districts that use a TRP system, as compared with the PR method. The electoral system for this body had traditionally used a plurality (TRP) method only for those districts with fewer than three seats to be chosen – approximately one-third of all seats (37 per cent in the 2001 Senate elections). However, the Raffarin reforms raised this threshold to three seats per district, resulting in 35 per cent of all senators being chosen in plurality districts in the 2004 elections, and a markedly increased figure of 65 per cent in the 2008 elections. As such, the effect of this reform did not really become apparent until the later 2008 elections, although the percentage of closed-list proportional method (PR) was much higher in 2011.

The phenomenon of ‘party proliferation’ in Senate elections involves a scenario where party members bolt from their own party to form a new, temporary party, presumably to bypass parity requirements for PR districts. By such a strategy, two (or more) male incumbents can avoid the parity requirements for PR districts that require the alternation of male and female candidates on their party lists.

Our examination of the most recent four Senate elections (2001, 2004, 2008 and 2011), reveals 18 districts out of 58 total PR districts in which certain members of the centre-right party (UMP) ran instead as a head of an alternative party list, usually called ‘Divers Autres’, or even with the same coalition name (LMAJ) as occurred in 2011. In each of these 18 districts, the result was the election of one male UMP Senator, and one male ‘Autres’ Senator, rather than a second-place female on the UMP party list, as required by the parity law. Despite the ballot identifying them as members of different parties such as DA, their official Senate biography listed these senators as members of the UMP party.

How many more women would have been elected? Perhaps thirty-eight?

The Table below is an estimate of how female candidates might have fared in these post-2001 elections, if the previous electoral rules had been in place, as well as the impact of party proliferation.

Table: Estimation of the effect of the Raffarin Reforms and party proliferation on the number of women elected to the Senate and European Parliament (2004-2011) 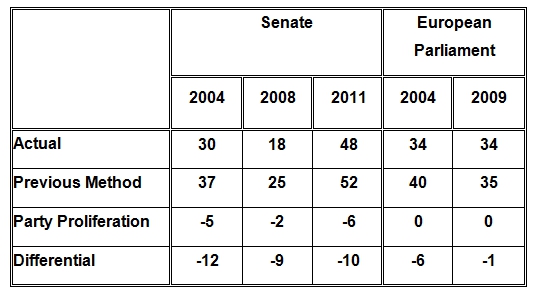 Note: Pearson Correlation significant at 0.05 level for both Senate and European Parliament elections.
Source: French Ministry of the Interior

First, we can examine those Senate districts with three seats at stake, that is, those that began using a plurality system in the 2004 election after the Raffarin reforms. Looking at these 24 districts, we can ‘re-run’ the races with the previously-used PR system to determine whether the prior rules might have altered the gender balance of the Senate delegation. In doing so, an assumption is made that the voters (primarily municipal councilors) would have voted in the same manner, along party lines. The results suggest that more than 18 women would have been elected in these three Senate elections if the Raffarin reforms had not been adopted and the previous PR method had been used in these three-seat districts.

For example, in the Senate district of ‘Indre et Loire’ in 2011, the left-leaning preferences of voters resulted in the election of two members of the Socialist Party and one Communist Party member – all men. Had this district used the previous 2001 PR method, the parity law would have required the Socialist Party to have a party list with at least one woman among the top three spots on their party list. Therefore, a minimum of one female Socialist member would have been elected, instead of the actual result of three male candidates in this district. In all of the four such districts in 2011, a similar scenario occurred, resulting in the loss of four potential female Senators. For the 2004 and 2008 Senate elections, similar results occurred, but more markedly so because there were more TRP contests in these election years – a loss of seven potential female Senators both in 2004 and 2008 — primarily because of a change in electoral rules.

This table also incorporates the similar estimates for EP elections, and party proliferation in the 2004, 2008 and 2011 elections. That is, we looked at the actual vote totals in all these elections, but assumed that the EP elections would have stayed nationwide, and that party members would not have been able to temporarily defect from their own party in CPR districts. The cumulative effect of all three of these phenomena is remarkable. Had the previous electoral rules been in effect, and had parties been prevented from running two of its candidates on different party lists, it is likely that a substantially increased number, perhaps 38, of women would have been elected to office in France.

Clearly, there are other possible explanations for this rather modest increase in the number of women in French politics. However, the ‘rules of the game’ were undoubtedly an important variable. The Raffarin reforms had a definitive impact, and, most likely, were adopted with at least awareness of the electoral consequences for parity. Certainly, the headship bias and party proliferation did not occur unwittingly. The parliamentary debate over these electoral reforms in 2003 indicates that one of the reasons for the adoption of the EP reform was to increase turnout in EP elections by offering candidates with closer local ties to the voters. However, it is a bit more difficult to be sanguine about the increase in the number of plurality districts for Senate elections, as Senators were quite open in their opposition to parity law.

It appears that supporters of gender parity should push for a return to more proportionality in Senate elections, and consider whether the headship of party lists should come under greater scrutiny for all PR districts, including the eight regional EP ones. Reining in party proliferation would also be a difficult task, but unless some recognition of these varied obstacles to parity are made by the national legislature or the largest parties, the impact of French parity law will remain quite modest.