Today EUROPP launches the fourth episode in our voxEUROPP series of podcasts. Presented by Chris Gilson, voxEUROPP draws on academic experts from EUROPP to discuss the latest issues across European governance, economics, politics, culture and society, both at the European Union and national levels. 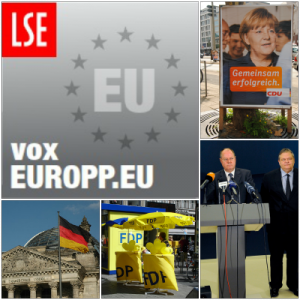 Germany heads to the polls on September 22nd in elections that are being closely followed in Europe and beyond. With doubts over Greek debt and economic problems across Southern Europe, these elections are incredibly important to the future of the Eurozone. LSE Senior Lecturer in Political Economy, Waltraud Schelkle, examines the meaning of the elections for the EU. Patricia Hogwood of the University of Westminster takes a closer look at the election campaign and other emerging parties, and world renowned German sociologist, Ulrich Beck, tells us why Europe should reinvent modernity.

The outcome of this month’s federal elections will not change Germany’s course on Europe.

Despite Germany’s ‘green’ reputation, the issue of climate change has been largely absent from the federal election campaign