Increasing the number of exports produced by European countries is a potential route to creating more jobs within the European Union. José Manuel Rueda-Cantuche writes on the impact of exports sent outside of the EU on European job creation. He notes that in addition to creating jobs in manufacturing industries, exports also create jobs in related service industries. Outlining the results of a study on the relationship between exports and employment, he highlights the EU states which are most reliant on extra-EU trade for job creation.

It is commonly accepted that exports should lead to an increase in the number of jobs by promoting economic growth and generating multiplier and spillover effects. Indeed, the European Union (EU) has really progressed during the period 2000-2007 towards a more vertically integrated economy, reducing the labour intensity of the goods and services exported outside, trading most prominently within the European Single Market and subsequently, generating a bigger number of jobs. Moreover, despite a reduction in the labour intensity of European exports, the associated employment grew from 22 to 25 million jobs during the same period, with the contribution of extra-European exports to total employment remaining markedly stable at around 10.3 per cent on average.

Contrary to general perceptions, the trade in manufacturing products is also important for job creation in services. International trade in manufactured products generated the largest number of jobs in the EU with around 15.7 million jobs in 2007, of which 8.7 million jobs were created in the manufacturing industry. Moreover, 5.7 million jobs (37 per cent) were indirectly created in the services industry (including trade and other services) to supply the producers of exported manufactured products with supporting auxiliary services. This amount represents 43 per cent of the 13.4 million jobs associated with the service industries (including trade). Figure 1 shows the types of employment associated with various commodities in the EU in 2007.

Figure 1: Industry origin of employment by commodity in the EU (2007) 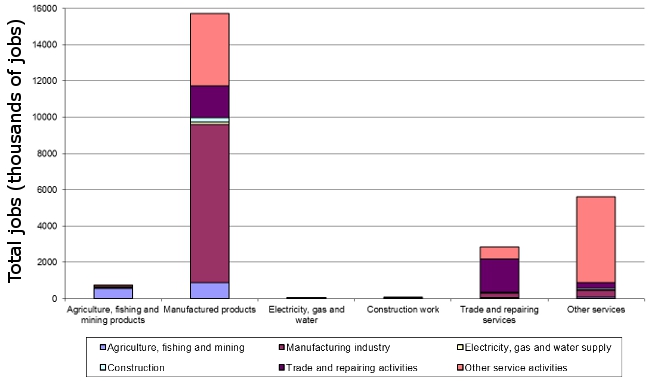 Note: Each coloured section indicates the industry in which jobs associated with each commodity are located (all EU countries).

Moreover, while employment associated with the manufacturing industries barely increased by 350,000 jobs from 2000 to 2007, the industries providing other service activities generated an additional 2 million jobs, of which 31 per cent were linked to manufacturing products.

The distinct evolution patterns across Member States point to the interplay of several factors in explaining the relationship between trade and employment in Europe. One of the important findings from a recent analysis I (along with several co-authors) have done in this context is that the contribution of extra-European exports to total employment is fairly stable over time. This is not a surprising result and has to do with the fact that, although cyclical drivers play a role (not least the evolution of exports), this indicator mainly reflects structural features of the economy. This point comes forward even more strikingly when the analysis is carried out at the Member State level.

The contribution of exports to the rest of the world to total employment varies markedly across the EU, reflecting structural idiosyncrasies of the different Member States. Figure 2 shows that in 2007 the ratio of employment associated with extra-EU trade over total employment ranged between 3 per cent in Greece to 13.1 per cent in Malta.

Figure 2:  Employment associated with exports outside of the EU as a percentage of total employment within EU countries (2007) 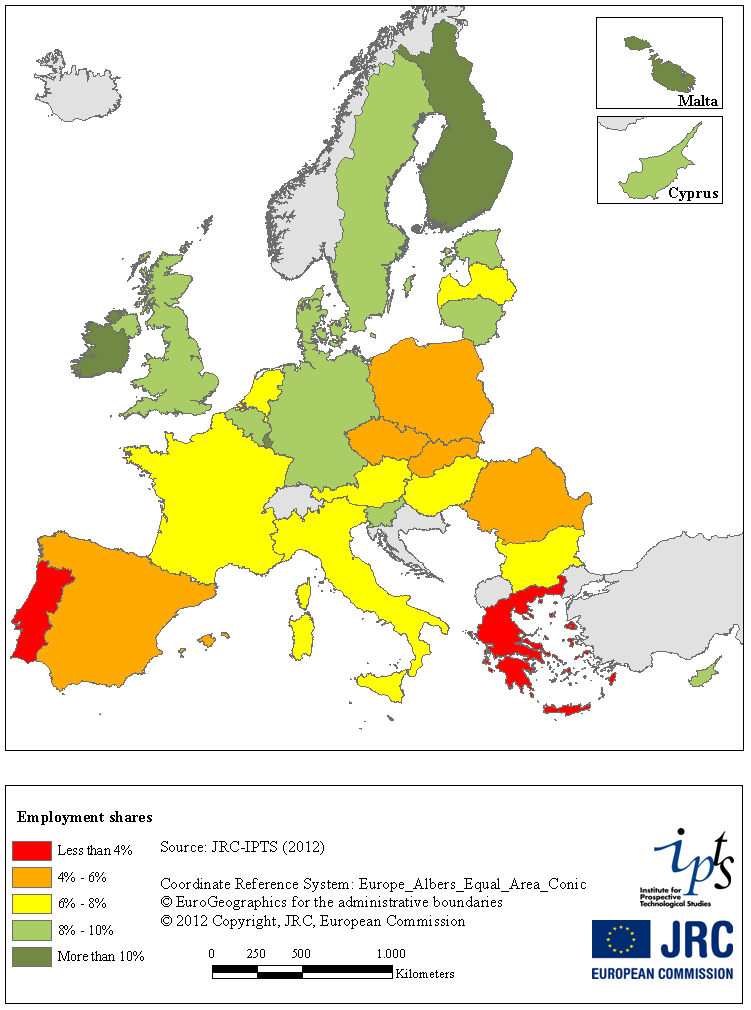 Unsurprisingly, in general, the share of employment associated with extra-EU exports tends to be the highest in smaller countries, notably Malta, Ireland (12.2 per cent in 2007), Finland (11.6 per cent) and Luxembourg (11.3 per cent). Among the bigger economies, it is in Germany that the extra-EU exports made the largest contribution to employment (9.6 per cent in 2007), followed by the UK (8.1 per cent) and Italy (7.7 per cent). In contrast, in Spain this ratio was notoriously lower at 4.1 per cent. It is in Germany (3.8 million), UK (2.4 million), Italy (1.9 million) and France (1.8 million) that the largest number of jobs depending on extra-EU trade can be found in 2007.

Another possible factor explaining the relationship between trade and employment is the continuous change of the profile of EU exports, with inevitable reflections on labour markets. Around 16.7 workers were employed in the EU per million euro worth of exports to the rest of the world in 2007 (down from 20 million, in 2000).

Figure 3:  Employment per million euro worth of extra-EU exports (2007) 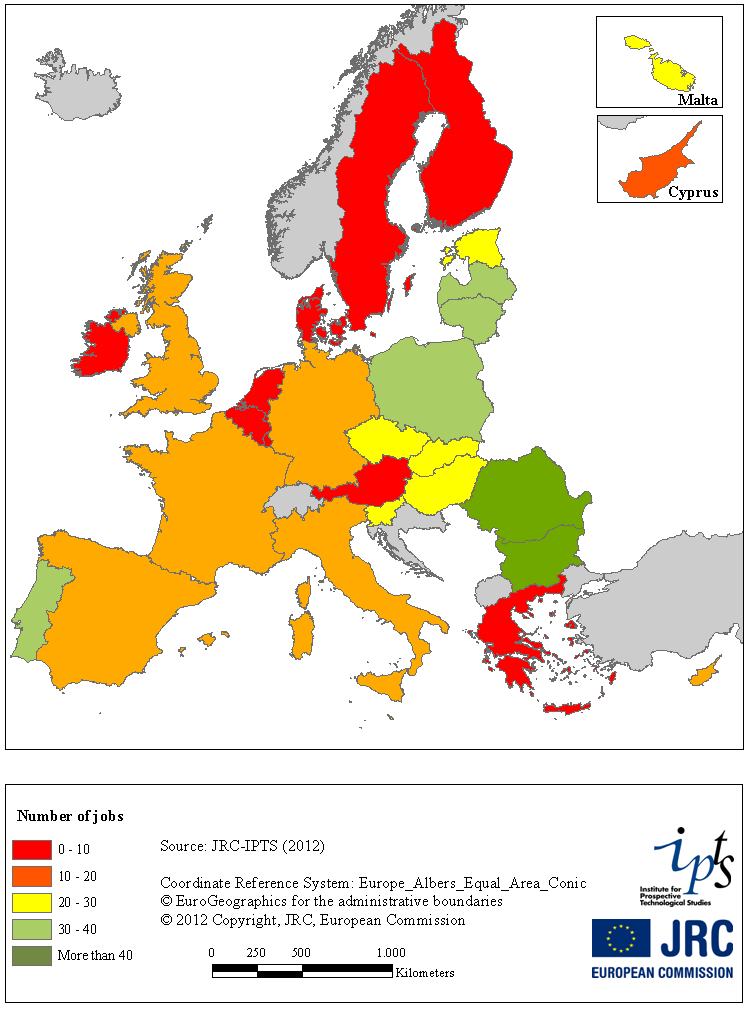 The evolution of the number of jobs associated with extra-EU exports could also be reflecting changes in the strategy that European firms follow to integrate themselves in the world economy. In other words, if EU firms decide to outsource increasingly larger shares of the production process to outside the EU, this would forcefully reduce the net employment that is used in the EU to produce the goods and services that are sold to the rest of the world.

To analyse further how changes in outsourcing may be directly affecting the number of jobs associated with EU exports, we computed the so called ‘vertical specialisation index’ that captures the degree to which inputs imported from outside the EU are used to produce exports or, in other words, the import content of exports. The results obtained for the 27 Member States are provided in Figure 4. Many differences exist between EU countries as the vertical specialisation shares of EU countries in 2007 range between 5.2 per cent in Cyprus to 24.7 per cent in Denmark. 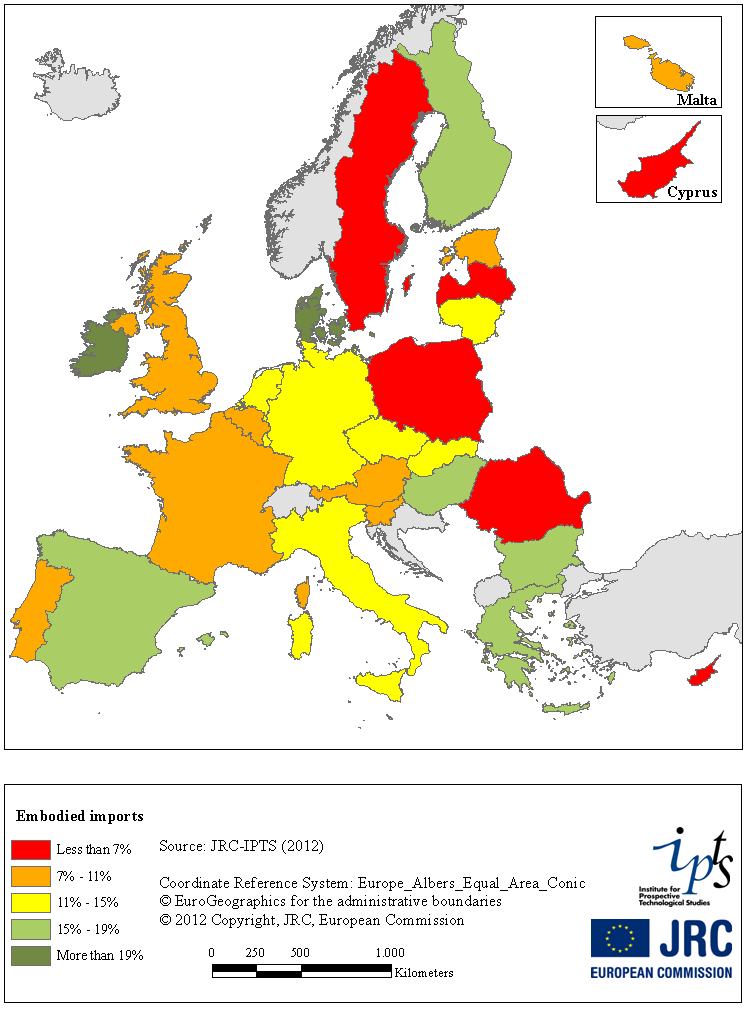 Note: The figure shows the percentage of imports which are used by EU countries in producing exports.

In contrast, in some countries vertical specialisation has increased. This is for example the case of Denmark (from 17.2 per cent to 24.7 per cent), Luxembourg (from 7.5 per cent to 14.1 per cent), and Spain (12.9 per cent to 18.6 per cent). In these countries the increase in the outsourcing of inputs to production sites outside the EU may have been one of the factors driving the decrease of the embodied employment per million euro worth of foreign EU exports between 2000 and 2007.

However, for the whole of the EU this does not seem to have played a major role in terms of the relationship between exports and employment. The EU-wide vertical specialisation index increased moderately from 13.6 per cent in 2000 to 15 per cent in 2007.

Note:  This article gives the views of the author, and not the position of EUROPP – European Politics and Policy, nor of the London School of Economics, or the European Commission and its services.

The eurozone needs its own budget with significant capacity to absorb major shocks and tackle the crisis.