Regionalist parties have become influential actors in Western democracies, in spite of their relatively limited electoral weight. The referendum on Scottish independence advocated by the Scottish Nationalist Party (SNP) is now scheduled for September 2014. In Spain, there is ongoing mobilisation for a similar referendum to be held in Catalonia, which is supported by Catalan nationalist parties. These are just two of the most recent examples of how regionalist parties can influence democratic politics and even pose a threat to state integrity.

During the last four decades many states have tried to handle regionalist claims by devolving power to those regions. The 1970s saw the concession of wider self-government powers to South Tyrol in Italy, the start of the federalisation process in Belgium, the creation of autonomous communities in democratising Spain and the first, unsuccessful, attempt to devolve powers to Scotland and Wales in the UK. A new wave of devolution reforms followed in the 1990s and early 2000s – this time with concrete outcomes in the UK – under pressure from old and newly emerged regionalist parties. The aim of these reforms was to appease the demands of the regionalist side and to find a new satisfying equilibrium between their demands and the needs of the whole state. The underlying idea was that decentralisation reforms would neutralise radical regionalist threats by undermining the electoral weight of regionalist parties. The examples of Scotland and Catalonia suggest that this strategy may have failed. But what is the general trend beyond these two specific cases? 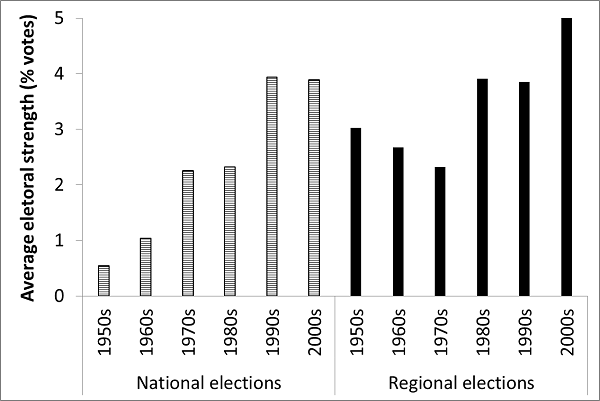 In order to evaluate the impact of devolution reforms on the two types of regionalist parties and across the two levels of government, we used data on devolution reforms to develop a model that shows the variation of electoral strength. The most important results of this analysis are presented in Chart 2 below. 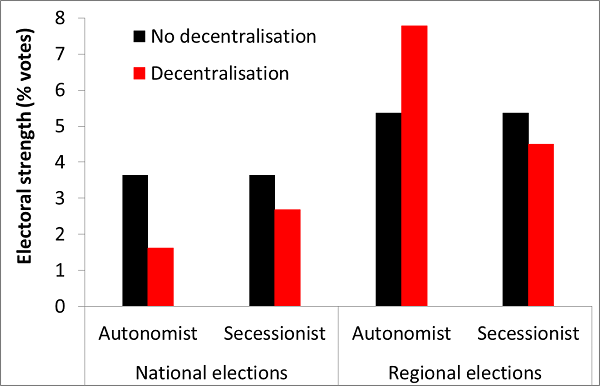 In contrast, in regional elections, decentralisation reforms translate into a strong electoral advantage for autonomist parties, while secessionist ones are unaffected. It is worth noting that regionalist parties often present themselves as credible and responsible parties of local government and hold moderate positions on the traditional left-right dimension. This type of strategic positioning is attractive to the majority of regional voters and can explain why they benefit most from the empowerment of regional institutions.

These findings show that the electoral effects of decentralisation reforms are complex and work in opposite directions across the two levels of government. Reforms undermine regionalist parties in national elections, but strengthen them in regional ones. In addition, they also seem to place contradicting incentives for the party across the two levels. Radicalisation can minimise electoral losses on the national level, but moderation can maximise electoral gains at the regional level. Crucially, the question remains as to which of these two incentives will prevail.