Providing the resources of the welfare state to increasingly diverse populations has been a controversial issue in several European countries, notably in the UK where the government has advocated restricting EU immigrants’ access to the benefits system. Matthew Wright and Tim Reeskens analyse the effectiveness of national identity as a tool to promote social cohesion in Europe. They argue that welfare chauvinism is never tempered and can actually be exacerbated by national identity. Promoting nationalist sentiment is therefore a poor way of securing broader public support for wealth redistribution, and other methods should be sought.

As developed democracies diversify demographically, mainly through immigration, they face what political scientist Kenneth Newton calls the ‘new liberal dilemma’: namely, the mounting difficulty of sustaining policies of vertical redistribution (eg “welfare”) enacted during a more ethnically homogenous era. People, the argument goes, are unwilling to make sacrifices to help support those who look and act differently from them, or, at any rate, they are less willing than they would be for those who they view as more similar to themselves. Writ large, this argument implies that diversification should erode popular support for welfare redistribution and, given the established link between public opinion and policy, this puts the programmes themselves in jeopardy.

A common claim is that national identity, broadly understood as attachment to a social group super-ordinate to ethnic and other particularistic identities, solves this difficulty by binding disparate interests together and forging social solidarity. Variations on this argument appear in various strands of normative political theory, with one fault line distinguishing “constitutional nationalists” from “liberal nationalists.” The former, closely identified with Jürgen Habermas, argue that allegiance to civic norms and ideals (mainly in the form of founding documents, core political principles and laws) can sustain a sense of national community and, concomitantly, support for redistribution.

The latter, the most prominent example being David Miller’s influential book On Nationality, dismisses Habermasian “constitutional patriotism” as a thin gruel, unable to nourish the kind of social bonds required to generate support for redistribution. Rather, Miller favours national identity premised on a cultural dimension: “ties of community are an important source of such trust between individuals who are not personally known to one another” and “trust of this kind is much more likely to exist among people who are a common national identity, speak a common language, and have overlapping cultural values”.

While they tend to draw indiscriminately upon both constitutional and cultural sources of national identity, politicians, too, frequently make a very similar case. With an eye to growing immigrant populations, leaders of the extreme-right parties peppering the European political landscape often invoke a hardworking and virtuous “us” against an undeserving “them.” But this is not a fringe phenomenon: closer to the centre, former French President Nicolas Sarkozy’s ‘Le grand débat sur l’identité nationale’ (The great debate on national identity) invoked both political and culture elements of French national identity to help integrate immigrants, as did British PM David Cameron’s call for a more “muscular liberalism” in British identity.

The ubiquity of these arguments is striking, but is what they commonly suppose correct? As is often the case, empirical evidence has yet to fully catch up with theory and rhetoric, a deficiency we aimed to address using opinion surveys from 29 European countries fielded in 2008 as part of the fourth wave of the European Values Survey. Using this survey, we examined the interrelationships between three different kinds of national identity – ethnic, civic, and cultural – and three different kinds of support for welfare – support for equality of incomes in principle, support for government redistribution and belief that immigrants are an undue burden on the welfare state. Our overarching question is simple: can national identity solve the new liberal dilemma?

On balance, it cannot. The Table below shows a truncated set of results from multilevel multiple regression models estimating the influence of various kinds of national identity on our three distinct measures of welfare support. Positive coefficients indicate that those expressing higher levels of each kind of national identity (all else equal) indicate stronger support for the principle of equality, a strong role for government in redistribution, and (conversely) strong agreement with the notion that immigrants are an undue burden.

Keeping this in mind, note that only ethnic national identity seems to underpin support for redistribution in a general sense. The relationship between civic and cultural identity on these outcomes is either statistically zero or (strangely) negative. Moreover, expressing strong national identity of any kind increases the likelihood that one will agree with the sentiment that immigrants are an undue burden on the welfare state. This, more than any other single finding, jeopardises the notion that the tensions furnished by immigration can be eased by a strong sense of national identity. Apparently, any such feeling, no matter how “liberal” the source, exacerbates immigrants’ position as undeserving “outsiders”.

Table: Welfare state support as a function of national identity

Figure: Impact of immigrant diversity on the relationship between national identity and welfare chauvinism 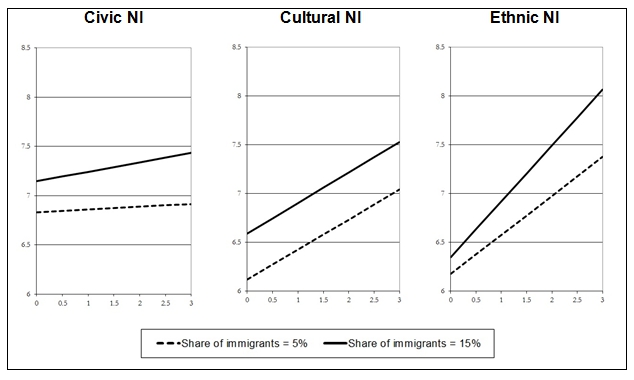 To be sure, we do find support for both constitutional and liberal nationalist arguments in our analysis. For instance, the positive effect of national identity on welfare chauvinism tapers off monotonically as one moves from the most ethnic to the most civic conceptions of a nation. In short, the less “exclusive” one’s national identity is, the less likely it is to translate to chauvinism with respect to immigrants, exactly as both Miller and Habermas argue. Furthermore, “cultural” and “civic” nationalists are less sensitive to the contextual “threat” of heightened levels of ethnic diversity. Finally, it is worth noting that both national identity and welfare support are muddy and multifarious, and as a result difficult to measure unambiguously. We do the best with what we have, but it would be foolish to close the debate based on the findings presented here.

Even so, it appears at the moment that both civic and cultural nationalists face an uphill battle, at least as far as the new liberal dilemma is concerned. Our analysis here indicates that if the aim is to generate increased support for redistribution in mass publics in light of that dilemma, national identity is simply not the answer.