The EU is frequently charged with lacking legitimacy, particularly in cases where national politicians make important decisions outside of national political frameworks in Brussels. David Sanders and Gabor Toka use a pair of identical surveys to highlight the EU preferences of ‘elites’ and national electorates. They argue that while citizens generally take their lead on EU issues from national leaders, politicians are more likely to listen to party supporters and business representatives.

Political commentators frequently observe that Europe’s political elites are far more enthusiastic about the European project than European voters. In the UK, for example, the leaders of the three main parties are all pro-European Union, yet public opinion is generally Eurosceptic. Are the views of Europe’s political elites significantly out of line with those of European mass publics? Do Europe’s politicians take note of voters’ views when they are deciding how they view the EU? Do voters follow the lead given by politicians when they form their views of the EU?

We explored these questions by conducting two identical and simultaneous surveys across 16 EU member states in 2007. These involved a representative mass survey of over 16,000 respondents and an elite survey, which covered both political elites drawn from the national legislature (1,354), and economic elites drawn from each country’s top 100 companies (706).

We were interested in comparing mass and elite opinion across four sets of attitudes towards the EU. These covered the ‘strengthening of the EU’ (should the EU’s central institutions be strengthened at the expense of national governments?); the ‘scope of EU policy’ (should more policy areas be ceded to EU decision making?); ‘trust in EU institutions’ (the Commission and the European Parliament); and ‘attachment to Europe’ (strength of European identity). Each of our attitude sets was measured using a number of different questions, and different metrics were used across the four areas. However, the measures were identical across the elite and mass surveys.

Charts 1-4, corresponding to our four sets of attitudes above, show our simple descriptive results for mass publics and political elites. Across each domain, and across almost all countries, Europe’s political elites record higher – more pro-EU – scores than their mass public counterparts. This is true both for countries where EU sympathy is relatively low (such as the UK) and for those where sympathy is generally high (such as Italy or Spain). There is one exception to this general pattern in Chart 2. In relation to the scope of EU policy, mass opinion in several countries (including the UK) is more pro-European than elite opinion. This probably reflects the general tendency for people (in this case national politicians) to avoid voting to disempower themselves rather than any public enthusiasm for greater EU policymaking competence. 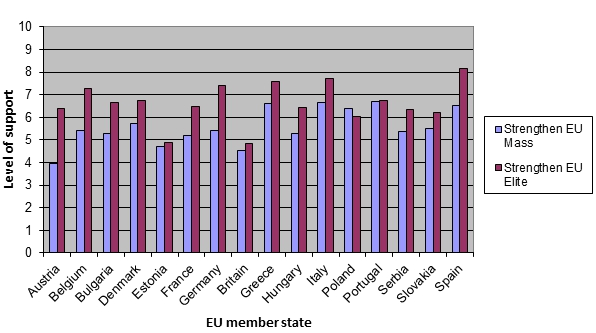 Note: The Chart shows average responses to a question on the principle of strengthening the EU’s institutions relative to those of national governments. Level of support is measured on a scale from 1-10, where 10 represents that an individual is ‘strongly in favour’ of strengthening the EU’s institutions and 1 represents an individual being ‘strongly against’ the principle. 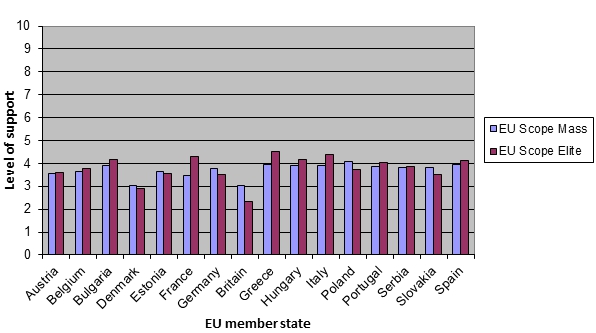 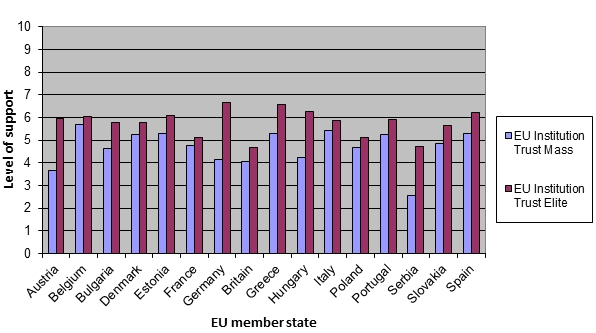 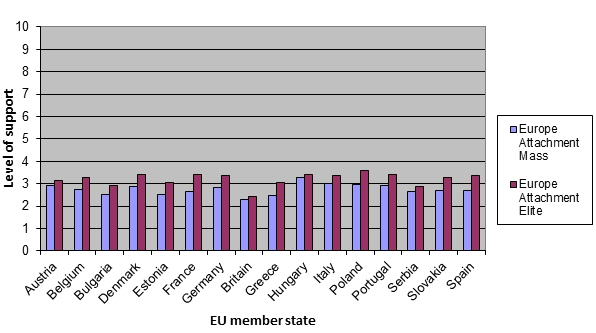 So the answer to our first question is clear. Across a wide range of EU countries, Europe’s politicians are definitely more enthusiastic about the EU than their voters. However, we were also interested in knowing the extent to which, first, national politicians are responsive to public opinion about Europe in their own countries and, second, voters’ opinions about Europe are conditioned (or ‘cued’) by the views articulated by politicians.

In order to explore these issues, we had to make a number of (untested and probably untestable) assumptions about how information is transmitted between elites and masses. The methodological principle that we followed was nonetheless very simple. We established very simple individual-level models of mass and elite attitudes towards the EU along each of the four attitude dimensions shown in Charts 1-4.

For example, for our mass public respondents, we specified and tested a model of EU policy scope that predicted each respondent’s preferences on the scope of EU policy making from a mixture of individual attributes (each person’s left-right ideological position, perceptions of the benefits of EU membership and their demographic profile) and country characteristics (quality of domestic governance, and size of the country’s net contribution to the EU).

The outcome of this statistical exercise, dull in itself, produced some very interesting findings. We had been quite prepared to find that European elites and masses were involved in a dialogue of the deaf over Europe – that elites took no notice of mass public opinion and that masses were deaf to the overtures of elites. In fact, we found that the views of mass respondents across Europe were affected by the views of the political parties with which they identified. So, for example, controlling for a wide range of other relevant factors, the views on the EU of supporters of the Labour Party in the UK were clearly influenced by (‘cued by’) the average positions expressed by Labour politicians, while the views of supporters of the Conservative Party in the UK were cued by Conservative politicians.

More striking, however, was what our models told us about the influences on politicians’ views. Politicians paid no attention at all to average mass opinion in their respective countries. They paid a modest amount of attention to the views of their party supporters. But most of all they were influenced by the views of economic elites. If the business community broadly favoured the EU, then so did the politicians. If it was critical of the EU, then so were the politicians.

All this, of course, has interesting implications both for social psychological theories of mass political attitudes and behaviour (party cues do matter in opinion formation) and for theories of representative government (politicians can lead public opinion). What is of some concern is that politicians appear to take less notice of voters when it comes to Europe than they do of the views of national economic elites. Some might interpret this as demonstrating ‘prudent leadership’. Others might view it as ‘ignoring the will of the people’.