What would the economic impact of independence be for a territory such as Scotland or Catalonia? Robert Young writes on the transition costs associated with peaceful secessions. He notes that even in cases where independence would lead to economic benefits in the long run, transition costs may offset these benefits for several decades. These costs largely depend on the extent to which states can co-operate politically to manage their separation.

From a strictly material point of view, the desirability of secession depends on whether a regional economy can achieve better economic performance as a sovereign state than it currently does as part of a larger union. Once the transition is finished, and a new equilibrium is reached, performance will depend on many factors, such as the degree of integration that is maintained with the continuing state, relations with other countries within international trade regimes, inflows of foreign investment, productivity, innovation, and so on. But there is a prior consideration – how costly will the transition to sovereignty be? This question is crucial, because the costs of transition can more than offset the long-term benefits of independence.

Let us assume that a seceding region has a growth rate of 2 per cent per year, but that as a sovereign country it could achieve a growth rate 1 per cent higher. If the transition period were three years, and if the new country’s GDP were 3 per cent lower for those years until 3 per cent annual growth began, then it would return to where it would have been as a region in a little over 12 years. As shown in Figure 1, all the lost output would be made up in just under 21 years. For many inhabitants (always ignoring any non-material benefits of sovereignty) this could be a rational choice. 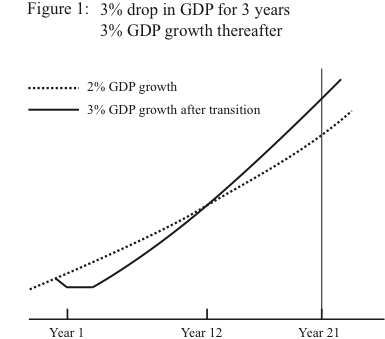 In contrast, assume that the growth rate as a region is 2 per cent and that 2.5 per cent could be attained as an independent country. Assume too that the transition period were four years, and that GDP dropped by 5 per cent for this period. In this case, as Figure 2 depicts, it would take about 30 years for GDP to reach what it would have been as a region, and a much longer period of time – about 50 years – to recover all the lost output. Secessionists would need to have a very low discount rate to accept independence under these assumptions, or else they would have to place a high value on non-material benefits. 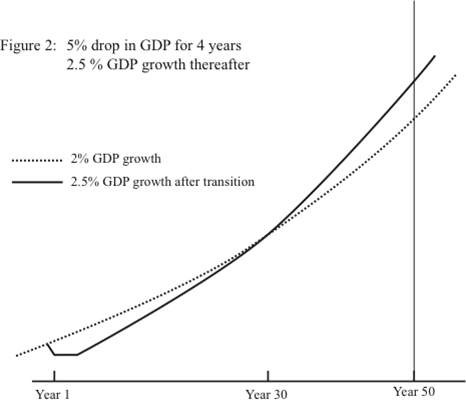 There are three main components of transition costs. These are transaction costs, fiscal costs, and the effects of uncertainty. Transaction costs include the resources devoted to disentangling the two states, which bear on both the continuing state and the seceding state. They also include the costs of creating the institutions of the new sovereign country, which mostly bear on it.

Transaction costs can be substantial. In cases of peaceful secession, the two parties generally deal with a relatively short list of items, and they negotiate expeditiously. But negotiations can be difficult. In the Czech-Slovak case, for instance, the disposition of cultural properties and secret-police files was problematic. Then there are the costs of transferring programmes, revenue sources, public servants, and pensions. Dividing the armed forces and its assets is costly.

Further, the new state must devote resources to international treaty negotiations and foreign representation. It must also build a range of institutions, and the cost of this varies with the extent of prior institutional development in the seceding region. No advanced industrial capitalist state has ever undergone such a breakup, but transaction costs obviously could be very large. In the Canada-Quebec case, cost estimates of institutional restructuring ranged from .40 per cent to 1 per cent of GDP. And not all transaction costs show up as measurable losses of GDP. There are also considerable costs to individuals and firms learning about and accommodating themselves to new arrangements.

Fiscal costs are the costs of higher taxes to provide the services that are currently provided in the seceding region by the central government. These costs depend on the flows of taxes and transfers between the regional and central governments. Such effects also depend on how the national debt is apportioned, and this is a matter for negotiation.

The third type of transition cost, and the most important one, is caused by uncertainty. When conditions are changing fundamentally, economic actors have less confidence in their expectations about the future. Perceived risk increases. This applies to individuals deciding where to live, firms deciding where to invest and to place orders, creditors deciding where and whether to make loans, and all other economic activity.

Borrowing costs rise during the transition to sovereignty because lenders worry about (1) political risk, or uncertainty about future public policies, (2) default risk, because of uncertainty about the creditworthiness of both the continuing and the seceding state, and (3) currency risk, arising from uncertainly about future exchange rates. But the effects of uncertainty are much wider, involving migration, savings propensities, firms’ decisions about sources of inputs and market outlets, and investment decisions.

To estimate uncertainty costs is difficult. In the Quebec case, predictions of GDP losses ranged from about 2 per cent to over 7 per cent. Of course, such estimates rest on many assumptions, and they can be contested. Predicting high costs can also be dismissed as fear-mongering, designed to discourage voters from choosing the Yes side. But the fact remains, as some Canadian economists stated before the 1995 Quebec referendum, that “the things that cannot be measured accurately in the current debate are the things that will have the most important influence on the economic consequences of disunity.”

Those ‘things’ depend on the politics of the transition. Here it is useful to distinguish between ‘fixed’ and ‘variable’ transition costs. There is some fixed floor of transition costs – resources devoted to negotiation and state restructuring and learning, along with some uncertainty-induced losses, even when negotiations proceed quickly and smoothly. But most costs are variable. They depend on the politics of the separation, on whether and how the two sides reach agreement about managing the secession and the post-independence issues.

Transaction costs would swell were there no cooperation about transferring public servants and pensions and programmes. The fiscal costs depend importantly on how the debt and assets are divided, and sharp disagreements about this are probable. Most important, uncertainty is a function of the level of conflict, the gravity of the issues left unresolved, and the time that passes without a clear settlement of issues like citizenship, the debt, the currency, and trade relations, to name only a few. For better or for worse, then, politics determines the cost of the transition to independence.

This article originally appeared on our sister site, British Politics and Policy at LSE