How important are the preferences of voters in coalition negotiations? Marc Debus and Jochen Müller assess the potential governments that could have been formed at the state level in Germany from 1990-2009, and relate these to the coalition preferences of voters. They find that there is a reciprocal relationship between parties and the electorate, with voters more likely to support coalitions based on pre-electoral alliances, and parties more likely to support coalitions favoured by their supporters.

In many European countries coalition governments are the rule rather than exceptions. Their regular presence is not only relevant for legislation and policy-making. Discussions and speculation regarding the partisan composition of the next government and the likelihood of potential coalitions become a standard element of election campaigns and influence voting behaviour. The 2013 election campaign for the German Bundestag, for instance, was characterised by extensive discussions about possible, likely and preferable outcomes of the government formation game. Most voters preferred a government between the two large parties, Christian Democrats (CDU/CSU) and Social Democrats (SPD), which ultimately formed a coalition in December 2013.

We have aimed to incorporate ‘vote seeking’ approaches and patterns of electoral competition into standard models of government formation. In doing so, we tested whether parties form coalitions according to the preferences of voters even when controlling for the ‘usual suspects’ to explain government formation, such as variables from the office and policy-centred approaches in coalition theory, and institutional constraints deriving from the political system of a country.

We built our analysis on a dataset that covers the characteristics of all potential governments that could have been formed at the state level in Germany from January 1990 onwards. This dataset includes information not only on office-based features of each possible coalition, but also on the parties’ positions on the relevant policy dimensions and their pre-electoral commitments. Furthermore, it provides information on the question whether a potential coalition is in line with the patterns of party competition at the federal level and on the date an election was held.

In order to analyse the impact of the electorate’s coalition preferences on government formation, we had to identify a source that provides information on voters’ opinions on possible coalitions. Fortunately, a large number of surveys exist that were conducted in the run-up to 77 of the 79 state elections in the period under study, almost all of which include questions that we require to construct our variables. Using these surveys, we created a dataset that covers information on the coalition preferences of voters and party identifiers.

Table 1 below presents the potential coalitions that are favoured by voters in the time period under consideration. As shown, five different coalitions are preferred by the voters in at least one case. A coalition between Christian Democrats (CSU/CSU) and Free Democrats (FDP) is preferred in 24 of 77 government formation situations. In 23 out of 77 cases, the voters prefer coalitions between the SPD and the Greens or the Christian Democrats and the SPD, respectively. Except for the ‘grand coalition’ between CDU/CSU and SPD, these coalitions include only parties of the same ‘political camp’ and can thus be regarded as the natural choice of the parties involved in the coalition bargaining process. In the remaining cases, the electorate preferred a social-liberal coalition – in the state of Rhineland-Palatinate after it had been in charge for ten years – or a coalition between the Social Democrats and the socialist PDS, which renamed itself as Die Linke (The Left) in 2007.

Table 1: Coalition preferences of the electorate in German states (1990-2009) 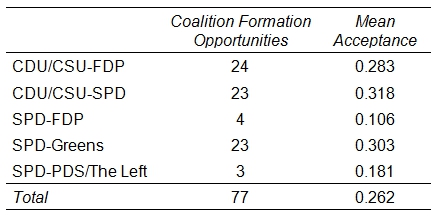 Note: Authors’ calculations based on German state election surveys from 1990-2009

The description of voters’ coalition preferences leads to questions concerning their origins and implications. We argue that parties should take the voters’ attitudes toward possible coalitions into account when it comes to government formation. At the same time, it is the voters who use parties’ pre-electoral statements to estimate ‘realistic’ outcomes of the government formation process.

Voters who identify themselves with Christian Democrats or Liberals, for instance, do in general prefer a coalition between both parties. If there is a pre-electoral alliance between the CDU and FDP, the support for such a coalition among party identifiers clearly increases. While almost 49 per cent of CDU/CSU voters and 56 per cent of FDP voters preferred a coalition of these parties in state elections where they did not both state an intention to form a coalition government after the election; the share of supporters for a Christian-liberal coalition among the voters of the respective parties increased to 72 per cent (CDU/CSU) and 73 per cent (FDP) if a pre-electoral alliance between both parties existed.

A similar picture arises when looking at the support for a coalition between the SPD and FDP among their voters. Only 13.7 per cent of SPD voters and 17.2 per cent of respondents intending to vote for the Liberals preferred a coalition between both parties in situations where the Social Democrats and the FDP did not agree on a pre-electoral alliance. When the parties did send signals during state election campaigns that they were willing to form a coalition government, 48 per cent and 53 per cent of SPD and FDP voters wanted this coalition to emerge from the election. These findings from a descriptive analysis of the impact of parties’ coalition signals on the coalition preferences of voters show that it is necessary to control for the impact of pre-electoral pacts on the coalition preferences of voters in multivariate regression models.

Note: Authors’ calculations based on German state election surveys from 1990-2009. Entries for parties belonging to a pre-electoral alliance are marked in bold.

For a longer discussion of this topic see the authors’ papers ‘Do Voters’ Coalition Preferences Affect Government Formation?’ and ‘Expected utility or learned familiarity? The formation of voters’ coalition preferences’.