May’s European Parliament elections in Poland will come toward the end of the current parliamentary cycle, with the country due to hold national elections in 2015. Ahead of the elections, Aleks Szczerbiak writes on the policies of the two major parties, Civic Platform (PO) and Law and Justice (PiS), toward Europe. He notes that despite tough rhetoric from both sides, there has generally been a consensus between the two parties on Poland’s position within the EU. He suggests that while the EU remains important in Polish politics, the European elections will primarily be dominated by domestic campaigning with a view to the 2015 parliamentary elections.

The May 2014 European Parliament (EP) election in Poland will primarily be a contest between the two parties which have dominated the political scene since 2005. Civic Platform (PO), led by Prime Minister Donald Tusk, has been the main governing party since 2007. Although it is a member of the centre-right European People’s Party (and often considers itself close to the German Christian Democrats) it is, in fact, an ideologically eclectic centrist party which its critics often dub a ‘post-political party of power’. Law and Justice (PiS) is led by Jarosław Kaczyński, Mr Tusk’s predecessor as prime minister, and was in office in 2005-2007. Jarosław’s twin brother Lech was President of Poland from 2005 until he died tragically in an air crash in Smolensk in Western Russia in April 2010.

Law and Justice is a right-wing socially conservative party which is a member of the European Conservatives and Reformists (ECR) group in the EP. Although its programme is economically leftist, in office it has pursued fairly orthodox liberal policies. It was also heavily criticised by the left-liberal Western (and Polish) political and media establishment – not least because it formed a coalition government with two smaller radical parties in order to obtain a parliamentary majority. Although Civic Platform was the first party in post-communist Poland to secure re-election for a second term of office in 2011, since then support for the government and the prime minister has slumped and from last May, Law and Justice has been 5-10 per cent ahead in the polls. The Chart below shows combined poll ratings for the major parties in Poland since January 2013. 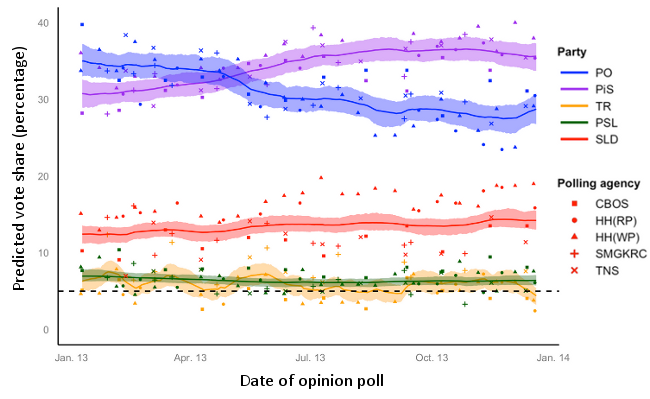 When first elected to office in 2005, Law and Justice promised to significantly re-orientate Polish foreign and European policy by ‘reclaiming’ it from a post-1989 establishment that, it argued, had been over-conciliatory and insufficiently robust in defending the country’s interests within the EU. The Law and Justice-led government adopted tough rhetoric of defending Polish sovereignty and ‘national interests’ and was frequently at odds with Poland’s EU allies, especially Germany. On the other hand, when it came to power, the Civic Platform-led government made a concerted effort to change the country’s image as a ‘trouble-maker’ on European issues by making Poland’s approach toward the EU more predictable and adopting a more conciliatory tone with Brussels and Poland’s EU partners.

Given their rhetoric on European issues and the role that this has played in developing these two parties’ international image, one might expect Europe to play a prominent role in the 2014 Polish EP election campaign. However, Civic Platform and Law and Justice have actually agreed on both the broad objectives of Polish EU policy and even, in practice, their approaches to how the European project should proceed. In fact, much of the debate between these two parties over ‘Europe’ has centred on what should be the best strategy and tactics to achieve Poland’s EU objectives. The two parties have thus treated Europe as a so-called ‘valence issue’: one where they argue about who is most competent to pursue a shared objective – in this case, effectively representing and advancing Polish ‘national interests’ within the EU. They have also used the European issue to highlight their respective different political styles and self-images, and the images that they attempt to portray of their political opponents.

Has the Eurozone crisis ‘Europeanised’ the Polish European debate?

There was some evidence, as the Eurozone crisis unfolded, that Polish political debate on European integration was actually becoming more ‘Europeanised’: that is, actually about the substance of the future of European integration rather than simply an extension of domestic politics by other means. The Civic Platform-led government’s main objective of European policy has been to prevent the EU from breaking up into the Eurozone and ‘other’ second-tier members. It used this argument to justify support for closer German-led integration within the EU as the way for Poland to remain at the centre of the Union’s decision making core and part of the ‘European mainstream’.

The Tusk administration has thus defended its decision to participate in salvaging the single currency – by, for example, signing up to the European Fiscal Compact – as an opportunity for Poland to gain influence in the decision making processes within the Eurozone and the EU more generally. Moreover, in spite of the turbulence in the single currency zone, the Civic Platform government remained committed to Poland finding a safe way of adopting the euro as a long-term strategic goal.

Civic Platform’s European policy was strongly criticised by Law and Justice. This was partly on familiar ‘domestic politics’ lines that the government lacked the will to stand up to the major EU states and that it would have a better chance of achieving its demands by adopting a tougher negotiating line. However, Law and Justice not only questioned the effectiveness of Civic Platform’s strategy for achieving shared goals, it also started to develop a more fundamental, principled critique of Mr Tusk’s party’s support for deeper European integration. For example, it argued that by handing over control of national budgets and finances to Brussels, the Fiscal Compact was a threat to the country’s sovereignty and independence. The party also appeared to harden its anti-euro stance, arguing that it could not see any point in the foreseeable future when it would be advantageous for Poland to adopt the single currency.

In fact, even before the Eurozone crisis, Law and Justice always had a broad rhetorical commitment to an anti-federalist (sometimes verging on Eurosceptic) approach to European integration. In practice, this has often given way to a more integrationist approach, especially when the party was in government in 2005-2007 (and, for example, signed Poland up to the Lisbon Treaty). Moreover, unlike the British Conservative Party, Law and Justice has never opposed Polish adoption of the euro in principle. Its formal position has always been, and remains, that Eurozone accession should be delayed until it can be achieved without damaging the Polish economy and must be preceded by a referendum.

At the same time, the Civic Platform government has become more cautious about rapid Polish adoption of the euro and abandoned plans floated at the start of last year to make European integration a dimension of party competition. Mr Tusk is fully aware that, while the vast majority of Poles continue to support EU membership, the Eurozone crisis has led to a slump in public support for adoption of the single currency, with recent polls showing that around two thirds of the public are opposed and only a quarter in favour.

Experience suggests that Polish elections are always dominated by domestic rather than European or other international issues, except when the latter are framed as valence issues. The EP elections in Poland are, therefore, likely to be viewed as another ‘second-order national election’ fought over domestic issues, and if the European issue features at all, then it will once again be a valence issue. Given that in such ‘second order’ elections voters generally punish governing parties by supporting the opposition, they are likely to prove a challenge for the ruling Civic Platform, while Law and Justice – following a streak of six consecutive defeats in local, European, parliamentary and presidential elections – is likely to emerge ahead in May. The EP elections will be seen as merely a prelude to the national elections that will follow them, above all the parliamentary elections that are scheduled for autumn 2015.

Aleks Szczerbiak – University of Sussex
Aleks Szczerbiak is Professor of Politics and Contemporary European Studies and Co-Director of the Sussex European Institute (SEI) at the University of Sussex. He is author of Poland Within the European Union? New Awkward Partner or New Heart of Europe? (Routledge 2012) and blogs regularly about developments on the Polish political scene at http://polishpoliticsblog.wordpress.com/