The German economy has generally been perceived as the strongest in the Eurozone, particularly since the start of the financial crisis. Terence Tse argues that while the country has impressive headline economic figures, the situation is not quite as healthy as it appears. He notes that levels of internal investment are relatively low in comparison to other European countries, and that demographic trends are likely to impede future development. He concludes that rather than relying on Germany to pull Europe out of its crisis, helping ‘periphery’ countries to stand on their own feet may be a more productive solution.

With so-called ‘peripheral’ Eurozone countries – Portugal, Italy, Greece and Spain – currently struggling to pull themselves out of the economic calamities, many people look to the ‘core’ countries, especially Germany, not only as the leader of the EU but also as the saviour of the Eurozone crisis. It’s not hard to see where they are coming from as Germany has the highest GDP in the EU with $3.4 trillion, about half a trillion more than France, the next largest economy. The country also has the best GDP growth among the largest European economies, including France and the UK. It has seen its GDP grow by over 8 per cent since 2009, with 1.2 million new jobs created. Indeed, in 2012, it had a budget surplus of 0.2 per cent of GDP.

Germany has also performed well on reducing unemployment. With the second lowest unemployment rate at 5.4 per cent, the country stands out as a notable exception in the EU. By contrast, the rates in France, Italy and Spain, the next 3 largest economies in the Eurozone, are much higher at 11 per cent, 11 per cent and 27 per cent, respectively. But what’s more telling is youth unemployment. The jobless rate for those aged 16 to 24 stands at 8 per cent, compared to 20 per cent in the UK, 22 per cent in France and a whopping 50 per cent in Spain and 60 per cent in Greece.

In addition, Germany has a trade surplus which hit its second highest level in more than 60 years in 2012. In 2013 it ran another surplus: at around 7 per cent of GDP, it is comfortably the largest in the Eurozone. Given that the Deutsche Bundesbank is the biggest among all the national banks to contribute to the ECB, it has the loudest voice in how the bank should run the monetary policy of the Eurozone.

What few of us realise about Germany

All these observations point to the economic – and hence political – strength of Germany. Yet these headline figures may give the wrong perception as they divert our attention away from the weaknesses of the country. Indeed, trouble seems to be bubbling below the surface. In November, the European Commission launched a formal review of Germany’s current account surplus, with the implicit suggestion that Germany’s exports have come at the expense of other Eurozone countries. Many Germans responded to what they saw as an absurd claim by saying that people outside the EU want to buy made-in-Germany products – they can’t help it that their products are of exceptional quality and standard. Yet, it is all too easy to forget that the weakness in the euro – the result of the on-going Eurozone crisis – has made its exports cheap and therefore competitive.

Indeed, Germany’s strong export figures actually highlight its weakness rather than its strength: the country is far from investing enough. The country’s current investment represents only 17 per cent of its GDP; even countries in more difficult economic environments, such as France and Italy, are investing more in their own countries. Public spending is a paltry 1.5 per cent of GDP. The result is chronic under-investment in energy supply, transport infrastructure and education. As shown in Chart 1 below, in the case of education, with spending at about 5.3 per cent of GDP, investment is lower than both the average of 15 European countries and the OECD average of 6.2 per cent. The investment gap is particularly big in early childhood where prospective returns on education are especially high.

Chart 1: Education spending as a percentage of GDP in selected European countries 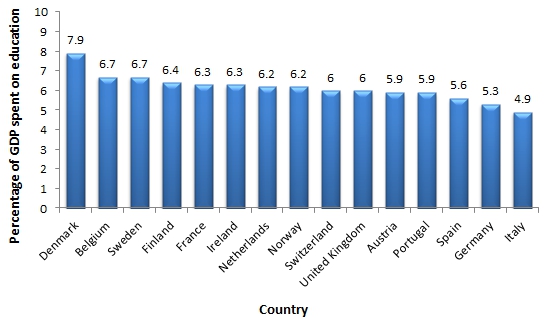 Note: Chart is based on 2009 figures available here.

The high quality of German products is undoubtedly mostly due to the continuous investments by the private sector. However the current level remains inadequate: growth in productivity has been in decline since 1999. Regulations have discouraged private investment, especially in the services sector. While the Germans save a lot of the money they earn, they are unwilling to invest it in local firms. Instead, they prefer to make overseas investments. Yet, one estimate suggests that between 2006 and 2012, these investors could have lost as much as €600 billion, roughly 22 per cent of GDP. The result is that local firms are shut out of the capital needed for investment;

Germany’s current budget surplus is not only the result of low public spending, but also the collection of high levels of taxes. Looking at the demographic pyramid in Chart 2 below, it is possible to see that, compared to other G7 countries, with the exception of Japan, the percentage of the German population in their 40s and 50s is particularly high. The good news here is that there are a lot of people currently paying taxes, contributing to the state coffers; the bad news is that without a massive boost in investment, especially in education, it will be increasingly difficult for the country to support the forthcoming old age government pension burden. Summarising these issues in one sentence, the country is living on the fruits of its past labour; it must do more if it wants to ensure its economic future. 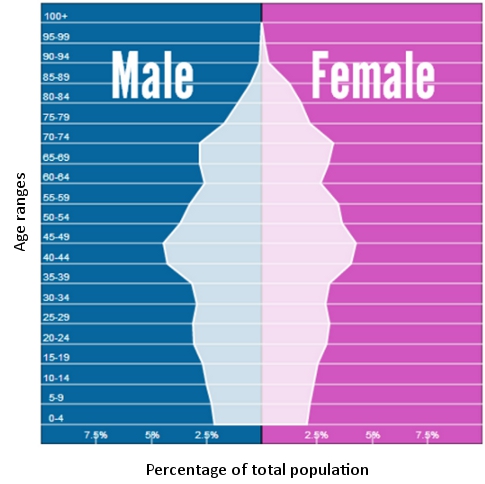 The fact that Germany is not as strong as we believe means that the country may not be able to lift Europe out of its economic woes. If this really is the case, we are pinning our hopes on the wrong leader. It therefore makes a lot more sense for us to come up with new ways to solve the Eurozone crisis: one that does not require Germany to take the lead. Instead, we can perhaps think of directly helping the peripheral countries stand on their own feet. But this shift in our thinking can happen only if we start to realise that, ‘ja’, Germany is doing well for the moment, but, ‘nein’, it will be doing less – perhaps much less – so in the future.

A version of this article originally appeared at the Huffington Post