Thanks to its sustained access to international credit markets, the Spanish central government’s ability to respond to the crisis was clearly superior to Spanish regions. If decision-making in the country were not so centralised in practice, this problem would have become one of the most important public debates in recent years. Discussions on which policies would have been better at adjusting the budgets in the critical context of the crisis, from a multilevel perspective, would have led to a discussion of public preferences and priorities in social policy, beyond the strict potential of each level of government. In any case, this did not occur. Quite the contrary, the opportunism of the central government in adopting a new regional financing model, that had failed in the recession, dominated the political scene during these years and exacerbated existing political and social problems.

The recent publication of National Accounts data for 2012 confirms the enormity of the budgetary adjustments in Spain. We can also observe how these adjustments were distributed, both by sector and geographically. As we know, the amount of public deficit – and similarly the rise of public debt – was not determined simply by Spain’s own political system (given its European dimension) but the way in which spending was distributed was largely a domestic issue.

From the National Accounts data series, we also find a surprising consistency in the territorial distribution of social spending, despite huge budgetary adjustments. Throughout the whole period of the crisis, more than 90 per cent of spending on education and health was at the regional level; while 90 per cent of the total spending on social protection and pensions was concentrated mostly at the central level.

However, the intensity of adjustment was very different according to each level of government, as can be seen in the Chart below, suggesting the need for more research on this issue. In real terms, reduced spending was especially concentrated in health and education services, managed by regional governments; in 2012 it was already below 2005 levels. Meanwhile, pensions and other social benefits under control of the central government remained fairly stable between 2009 and 2012, with few reductions. Also, the two peaks of spending by the central government seen in the Chart are easily explained: they are the “Keynesian” boost in 2008-09 and the bank bailout in 2012. 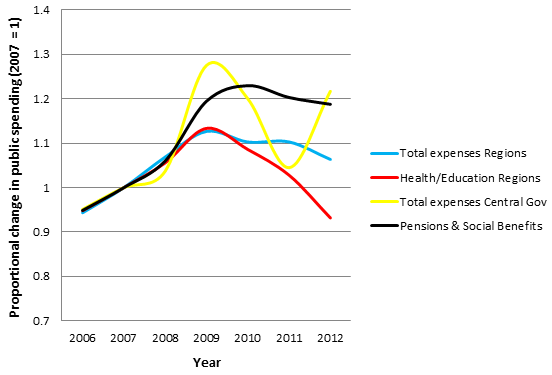 Why do we see such differences? I tentatively suggest two main reasons. First, a change of regional public finances, articulated by Law 22/2009, which involved an increase in the share of national taxes and a reduction in direct contributions and other funds from the central government. This created high expectations to improve regional finances, but occurred at the worst possible moment, coinciding with the year in which tax revenues fell dramatically as a result of the 2008 recession. The new law also harmed regional finances in the following years, given the stagnant tax revenues between 2010 and 2012, and the need to cover interest on their growing debts.

A second reason stems from the difficulties of the regions in borrowing accounts for the rest of the variation. Regions suffered intensely in these years, given the brutal drop in revenue and their inability to borrow in many cases, since the central government remained the sole lender. Some were forced to seek a bailout to avoid bankruptcy. Those receiving higher direct fund contributions had more room to move, but even they had heavy burdens to bear. This budget situation created numerous political tensions over recent years, even when the same party ruled in both the regional and the central government.

The government did not compensate regions adequately for the unequal cuts, which could have helped to alleviate reduced health and education provision. There appears to have been little change in the attitude of the PSOE government and the current government of the People’s Party. Both parties used their advantageous position, the latter possibly more intensively. There was a limit to their policy of containment, just to prevent bankruptcy of the regional governments.  Allowing regions to either compete and experiment, having stronger fiscal capabilities, or promoting regional horizontal co-operation, having federal-like institutions, would probably have produced a more balanced outcome than the actual situation.

The EU’s proposed quotas on women in boardrooms are a step in the right direction.