Unlike other western politicians, Angela Merkel has weathered the recession with remarkable success. Richard Carr argues that Merkel’s Germany shows that governmental interventionism can be compatible with the Conservative tradition and offers lessons on how it might be usefully deployed by the British right.

The economic crash of 2008 was not kind to the western political status quo. In the US elections that November, the expansive oratory of Barack Obama comfortably averted a third successive Republican Presidential term. In the UK General Election eighteen months later, the Labour Party achieved its biggest setback since the early 1980s. Tony Abbott and François Hollande have since turned out 2008’s incumbent in Canberra and Paris respectively. Generally, it pays to have been in opposition when the banks collapsed. 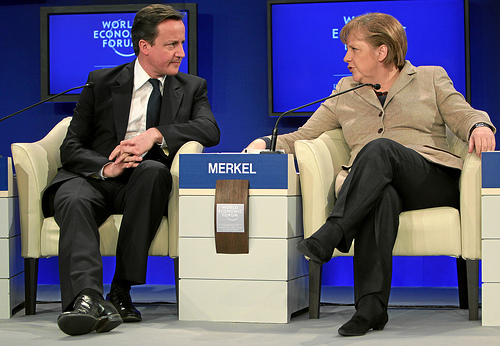 And yet there has been one great exception: Angela Merkel in Germany. In the German federal elections of 2009, Merkel increased the number of seats held by the centre-right CDU/CSU by 13. Last year she gained a further 72 seats – and her 41.5 per cent of the popular vote was comparable to the 1997 landslide achieved by Tony Blair in the UK (who won 43 per cent). There is much all parties can take from her leadership, but it may be of particular interest to the British right which often seems distracted by immigration, Europe, or law and order. Over the longer term indeed, as Bradley Hart has noted, the British Conservative Party’s ‘most defining characteristic since World War I’ has often (though not exclusively) been as ‘a counterpoint or alternative to the statist policies of the Labour Party’. Yet Merkel’s Germany shows that a positive form of governmental interventionism is not only possible, it also makes sense electorally for the Tories. There are three distinct lessons worth highlighting as the Conservative Party considers a more interventionist approach ahead of manifesto time.

The first concerns the treatment of low-paid workers. As David Skelton, head of think tank Renewal has argued, ‘Conservatives must be enthusiastic, rather than grudging, in their support of the minimum wage.’ George Osborne’s recent encouragement of the Low Pay Commission to look towards a £7 minimum wage was perhaps his most popular utterance of this parliament even though it has not yet led anywhere. A recent Treasury impact assessment asserted that this move would cost 14,000 jobs, though one wonders whether these losses could be concealed within a generally growing economy. Most voters, I’d wager, still associate the Tories with their opposition to the National Minimum Wage in the late 1990s rather than their more semi-embrace of the concept in the late 2000s. In contrast, Angela Merkel’s coalition agreement with the SPD saw both parties agree a new minimum wage equivalent to £7.07 to be introduced across Germany in 2015.

As I have argued elsewhere, there is a long intellectual tradition of One Nation thinkers, from Harold Macmillan in the 1930s to Ferdinand Mount today, arguing that the Conservative Party should be pushing the private sector further on wages to the low paid. If Conservatism is about competitive capitalism and unleashing market forces, it is entirely reasonable to bolster faith in the capitalist system by removing barriers to entry (i.e. a lack of capital) amongst those in lower income brackets. According to the IPPR and Resolution Foundation, universal application of the living wage could yield £3.6bn of extra revenue to the Treasury each year.

And yet it is the Labour opposition who have set the pace on the Living Wage whilst the Tories continue to struggle to convince the working class that they can represent their interests. With the 2015 election approaching, David Cameron looks set to rest on having raised the income tax threshold up to £10,000. That is a significant achievement, but a pledge to legislate for a statutory Living Wage by 2020 is something all parties should be pursuing. For Conservatives in particular it would very much challenge historic perceptions that they are out for the ‘bosses’ but not for the ‘workers’. If they want to be the ‘Workers’ Party’ then they will need more worker policies.

The second lesson from Merkel is that taxing the more toxic elements of the financial sector is entirely consistent with a pro-active, market friendly Toryism. The Financial Transaction Tax (FTT) has been greeted by a wall of noise from the City of London, with George Osborne – more or less – parroting their almost entirely invented lines against any mention of the tax. And yet it is precisely this FTT that Merkel, together with Italy, France, Spain and seven other European economies, has pledged to enact in Germany (and set to raise around €10bn each year through doing so).

Conservatism is a pragmatic ideology, and the evidence is that FTTs clearly work (including for pension funds). Over forty are currently in operation across the globe, bringing in over $40bn to national coffers each year. Our own mini-FTT (stamp duty on shares) raises £2.5bn per annum – twice the amount paid by the banks in corporation tax in 2011/12. We have the mechanisms to roll out our stamp duty (which HMRC ranks as our most effective tax, bringing in 99 per cent of the money that it is supposed to) to other riskier assets. We merely need leaders – such as Merkel – with the will to face the financial sector down. Arguably the right is in a more comfortable position to do this than the left.

And it is not just money power that the right should be tackling. Our politicians need to challenge the monopoly of Westminster too, for local government can deliver for the greater public good in a number of ways. Part of this is about empowering local communities to shape their areas, as Dominic Rustecki has noted with reference to ‘nudge’ strategies. But, frankly, much is about plain old return on investment. According to think tank Localis, British councils achieve up to five times return on investment for transport-related projects. Germany has long known this, with its various länder enjoying significant powers since the reconstitution of (West) Germany in the late 1940s.

As we rebuild our economy, banking and finance are a major piece in the jigsaw. Ed Miliband, Maurice Glasman and others have recently been heavily promoting the German Sparkassen model of local banks from the opposite side of the British spectrum. Though individual Tories such as Guy Opperman have touched on local banks, and others such as Jesse Norman clearly get that there are inherent problems with the big financial institutions, there has been insignificant movement in this direction from central government. 2008 showed that the vicissitudes of global capitalism can have a far greater effect on the north than it can on the City, and, when Northern Rock lost contact with its local roots and started lending recklessly, the game was well and truly up. Out of the economic crisis must come a new age of local banks, constrained to lend within their functional economic area (possibly the county or Local Economic Partnership), and rivalling both the big institutions on the one hand and usurious pay-day lenders on the other. Forwarding this message should not be Labour’s sole preserve.

Ed Miliband and Labour are ahead on all of the areas outlined here, but the point is that they are not alien to the Conservative tradition. Many contemporary Tories – as we saw after her death last year – venerate Margaret Thatcher. And our commentators (almost entirely because of gender) often assert that Merkel is a new Thatcher. But the reality is more complicated. Partly because of the necessities of coalition, and partly because of the differences between UK and German political culture, Merkel more closely resembles a Baldwin or a Macmillan figure in British history. A unifying figure people of all political persuasions can respect if not like.

David Cameron was portrayed as a One Nation Tory in opposition (rather bringing to mind his earlier jibe to Tony Blair ‘he was the future, once’). The threat for him is that Ed Miliband has taken both this mantle and its inherent meaning away from the Conservative leader. I do not pretend that the above ideas are the only game in town, but if the Tory Party is unwilling to consider alternative policies it will neither be worthy of the pragmatism it so often self-ascribes on one hand, nor the votes of the British people on the other. Across the North Sea, there are ideas at the ready. Forget agreeing with Nick, perhaps it is time for Dave to agree with Angela.

Richard Carr – Anglia Ruskin University
Richard Carr is a Research Fellow in History at Anglia Ruskin University and a member of the Labour History Research Unit. With Dr Bradley Hart, he edited The Foundations of the British Conservative Party: Essays on Conservatism from Lord Salisbury to David Cameron, published by Bloomsbury Academic last year.