Barrie Axford’s Theories of Globalization makes a welcome addition to the bookshelves of those interested in globality, globalism, and globalization, writes Patrick Theiner. The book offers students and scholars a comprehensive and critical introduction to the concept of globalization, and draws out the common threads between competing theories, as well as pinpointing the problems that challenge our understanding of globalization. 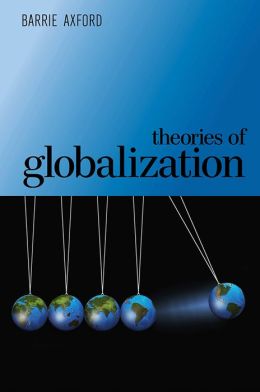 Few words have seen so much exposure over the last decades that academics get fatigued by their sheer mention, yet continue to use them as a core concept. Globalization is undoubtedly one of them, with its status oscillating between empty buzzword and core concept depending on discipline, field, and scholar. Helping to make sense of this is globalization scholar Barrie Axford, Professor of Politics at Oxford Brookes University, who in his book delivers a sweeping, cross-disciplinary overview of the concept of globalization and its use in the social sciences.

It has only been in recent years that globalization studies has emerged as its own discipline, rather than just an umbrella term for many different, but rarely connected, research agendas. Across eight substantive chapters, Axford sets out to build a conceptual inventory for this relatively new field, and shows how globalization is understood and employed in various academic fields and empirical contexts. Chapters 1-3 are structured along disciplines, and cover globalization in political science, sociology, geography, anthropology, and communication studies. Building on this, chapters 4-8 then attempt to identify shared themes, such as globalization as a spatial phenomenon or as a governance issue. Axford closes with a critical summary of the current scholarship.

In Chapter 2, the author begins with the field of International Relations, where the idea of globalization has a long and storied history. He shows how main theoretical approaches have been challenged in different ways, especially with regard to their conception of the nation state as the central unit of analysis. (Neoliberal) institutionalist thought has arguably had the most fruitful engagement with globalization in the form of the idea of “complex interdependence” affecting actors’ behaviour on the international stage. A similar picture can be drawn for sociology, where the very idea of society has often been confined to national borders. As a response to de facto globalization, sociology has generated a number of explanations for long-term, large-scale processes of social change such as world-systems analysis, world culture theory, or world society theory, all of which also have some overlap with political science thinking. Once established for political science and sociology, chapter 3 continues this pattern of globalization as a challenge to academic thinking inside borders. Much like spatially distinct territories and borders are at the core of geography, anthropology has long understood the world in multiples of the clearly bounded, local community. Axford points out how such traditionally “local” disciplines can sensitize us to how cultural globalization does not necessarily mean Westernization or homogenization, but also hybridization – globalization as a bottom-up force as much as a top-down one.

In chapters 4 to 8, Axford builds on the foundation of earlier chapters and identifies five major currents among almost all theoretical approaches to globalization: space, culture, history, governance, and capitalism. These chapters give a sweeping overview of an almost dizzying number of authors and ideas, from Manuel Castell’s networked societies, to Benjamin Barber’s Jihad vs. McWorld, from Tony Hopkins’ seminal books on the historical study of globalization, to Archibugi and Held‘s views on democracy on the global level. Axford closes with a particularly good section on the economic dimension of globalization that not just covers the usual neoliberal perspective, but also gives space to critical and activist perspectives. While they make up the bulk of the book, it is almost impossible to summarize these parts: the author moves so quickly between topics and writers that even broader ideas are sometimes covered in a page or less.

It is these chapters that showcase both the book’s strengths and its weaknesses. Axford’s breadth of knowledge and familiarity with a multitude of authors is impressive (the bibliography alone makes for more than 30 of the book’s 220 pages). His summaries are clear and concise, and he is adept at synthesizing the major arcs in the story of social science’s engagement with globalization. However, while the author is clearly deeply embedded in his field of expertise, his own voice seems at times curiously absent. This was certainly by design, as the book is intended primarily as an extended literature review rather than building its own argument, but one cannot help but wonder if the reader would not have also benefitted from a clear outline of Axford’s own perspective and its genesis. Of course, such broad overviews have their place: Theories of Globalization would make an excellent starting point for a student or researcher trying to get that initial hold on a subject. But the reader is left wanting for the author to sometimes assert himself more forcefully, to sort and choose more what to include and what to leave out. The best reviews arguably distinguish themselves by the courage to omit, rather than cover everything. As it stands, the book reminds one of Lewis Carroll’s tale about the country that planned its greatest achievement in map-making to be the map at a scale of one mile to the mile – certainly the greatest amount of detail, but also not a reduction of the initial complexity to a more practical form.

Nevertheless, the book certainly suits a variety of educational contexts. It offers students and beginning researchers an in-depth account of social science thinking about the process and challenge of globalization, and provides specialists with a well-structured typology that helps identify overlaps between disciplines and avenues for discovery. Despite the drawbacks mentioned above, Barrie Axford’s Theories of Globalization makes a welcome addition to the bookshelves of those interested in globality, globalism, and globalization.

Patrick Theiner – University of Göttingen
Patrick Theiner is Lecturer in International Relations in the Department of Political Science at the University of Göttingen, Germany. He is a former Government of Ireland Postgraduate Research Scholar and received his PhD from Trinity College Dublin in 2013. His research focuses on the interactions between states and international organizations, particularly in the broader areas of development and foreign aid. His interests include IR theories, international institutions, institutional design, innovative forms of global governance, global public health, and quantitative methods.