“Germany is the country that takes in the most refugees in Europe,” declared Hans-Peter Friedrich, the German Home Affairs Minister, at a meeting of the EU Interior Ministers last year. Similarly, at an EU Council of Ministers meeting, Angela Merkel said: “I’d like to remind you that we have quite a large number of asylum seekers that we have accepted [in Germany] by European comparisons.” Do these claims reflect reality?

What is the appropriate reference group for Germany? The whole of the EU? Or a smaller group of richer EU countries? When we compare the number of acceptances and resident stocks of asylum seekers, we can divide the EU into three blocs. The Eastern EU countries have relatively low numbers as they have little pull as receiving countries and don’t have an asylum infrastructure. The Southern EU countries, with the exception of Malta and Cyprus, also have relatively low numbers. However, they take in such large numbers of illegal immigrants that we can hardly fault them for their underperformance in matters of asylum. And then there is the bloc of 11 Northern and Western EU countries (the “EU11”), who are taking in the lion’s share.

For Germany to be making such lofty claims, it should be doing well within the EU11 bloc. Having examined the UNHCR statistics from 2005-12, the situation is not quite as rosy as Friedrich and Merkel suggest. First, the EU11 averages 23 acceptances per 100,000 inhabitants per year. Acceptances include granting applicants refugee status or a complementary protection status. As Chart 1 shows, Sweden leads with 121 acceptances, Ireland is last with 8, and Germany is next to last with 10 acceptances. Even though Germany’s numbers have been rising from 4 acceptances in 2005 to about 20 acceptances in 2012, it is still below average. 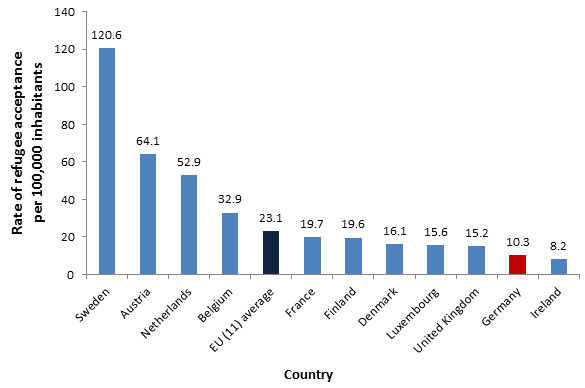 Note: Figures are rounded to one decimal place. Source: UNHCR

Now let us look at refugee stocks – the population of refugees and people in refugee like situations. According to the UNHCR, in 2012, there was a yearly presence of 1,223,000 refugees in the EU11, of whom 590,000 could be found in Germany. That means Germany is harbouring 48 per cent of the refugee stocks, whereas they represent only 30 per cent of the population in the EU11. If these numbers are correct, then this would indeed be a remarkable performance supporting Friedrich’s and Merkel’s claims.

However, it is necessary to also look at the latest developments in the reporting on refugee stocks. In January 2013 there was a request from politicians of the Die Linke (The Left) party to the German Government for accurate refugee stock data. The German government returned detailed data which added up to 426,000 refugees for the end of 2012. This was a substantial drop from the UNHCR data – who reported 590,000 for 2012. The UNHCR then responded with a renewed methodology for counting stocks for Germany, which resulted in an additional drop to 280,000 refugees in 2013. This renewed methodology, we should add, did not have much effect on counting refugee stock in other countries in the EU11, whose stocks went up slightly.

Chart 2: Number of refugees and people in ‘refugee like situation’ per 1,000 inhabitants in EU11 countries 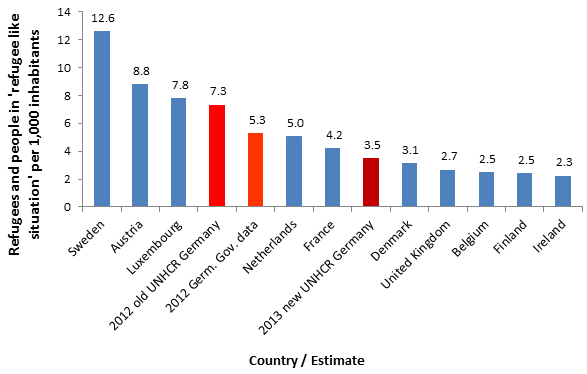 Note: Figures are rounded to one decimal place. Source: UNHCR

There are two puzzles. First, refugee stocks should not fluctuate this much over a two-year time span. Hence, there is something in the methodology that we need to uncover which explains this sudden drop in refugee stocks from 590,000 in the old UNHCR data, to 426,000 in the Government data in 2012, to 280,000 in 2013 in the new UNHCR data. How can a shift in methodology make 310,000 refugees disappear overnight?

What may partially explain this discrepancy between the 426,000 figure in the Government data and the 280,000 in the new UNHCR data is the following. The German Government data include 80,000 ‘Geduldete’ or ‘endured’ individuals – these are people whose applications have not been approved but who are not sent back home – whereas the UNHCR data do not. This status was created in the early 1990s as a response to the large influx of refugees from the wars in the former Yugoslavia. We suspect that the UNHCR do not count these in their latest data. Strangely, however, they are counted in the UNHCR acceptances which match the data from the German government that include the ‘Geduldete’. And furthermore, this does not explain where the count of 590,000 in the original data came from.

Second, why does Germany do moderately well in terms of stocks, while doing so poorly in acceptances in the EU11? As Elizabeth Collett has pointed out at the European Union Committee of the House of Lords (page 270) we have poor longitudinal data in the EU on refugees. The best we can do is to put forward a hypothesis. One mechanism to keep acceptances low but stocks high is by making the route to citizenship slow and arduous. Indeed, one can have fewer people enter the gates, but, if one keeps a tighter lock on the door to citizenship, then the holding chamber of people in refugee or refugee-like status may be better stocked.

In Germany, the route to citizenship is more arduous than in many other EU11 countries. First, in Germany, one needs to have a particular status for eight years before one can apply for citizenship, in comparison to a five-year EU11 average documented by H.G. Sicakkan. Second, even after this waiting time, it is harder to open the gates of citizenship. There are language tests and integration courses. Third, children of refugees whose parents have been in the country less than eight years under a particular status do not get German nationality.

In summary, when we compare German asylum outcome data within the proper reference class – Western and Northern EU countries – its performance is quite dismal when it comes to the number of acceptances. Its performance in harbouring refugee stocks is stronger, but the data are enigmatic. One hypothesis to explain the discrepancy between acceptances and stocks is that the route to citizenship is slower in Germany than in the EU11. If this is so, then Germany can hardly be proud of harbouring large stocks: they harbour large stocks because they are not willing to grant citizenship to long-term refugees, not because they are accepting large numbers of asylum seekers.

This research was supported by a grant from STICERD.

Note: This article gives the views of the authors, and not the position of EUROPP – European Politics and Policy, nor of the London School of Economics. Feature image: main building of the German Federal Ministry of the Interior in Berlin, Credit: Manfred Brückels (CC-BY-SA-3.0)

Jane von Rabenau – LSE, Department of Philosophy, Logic and Scientific Method
Jane von Rabenau is currently doing her BSc in Philosophy and Economics and works as a research assistant at the LSE. Her interests are indigenous peoples’ rights, India, inequality and poverty reduction. She is founder of LSE SU Terra Society, a society for the protection of indigenous land rights. Currently, she is writing her dissertation on why we should regard inequality as an externality.