Free movement in the European Union has been a source of controversy in the UK, with the United Kingdom Independence Party (UKIP) being particularly critical of levels of EU immigration into the country. Eric Kaufmann writes that opposition to European immigration may be a veiled way of expressing deeper concerns over racial change. He notes that at the same time, however, assimilation mitigates ethnic change, with a significant number of European immigrants shifting to White British identity over time. He argues that if European migrants were to be shut out under a points-based immigration system, ethnic change might actually be hastened.

A cross-party group has condemned as racist comments by UKIP candidate William Henwood and builder Andre Lampitt, who appeared in a UKIP election ad. UKIP has generally been successful in shaking off accusations of racism because its attacks on immigration focus on white Europeans and highlight economic rather than cultural threats. Henwood and Lampitt are embarrassing because they reveal that for some UKIP activists, blacks or Muslims matter more than Poles, while cultural threats trump economic ones. On this reading, talk of European immigration harming British jobs is a dog whistle for deeper concerns over racial change.

Our ESRC-sponsored research on white attitudes to immigration, due to be released in a Demos report in June, suggests a wider swathe of White British people may share this view. Though consciously non-racist, they may be subliminally unsettled by racial difference. This is not easy to divine in surveys and interviews, where respondents say East European immigration is as problematic as non-European inflows. But it can be argued that respondents are offering socially desirable responses to interviewers, or are reacting to their environment in unconscious emotional ways. As behavioural economists such as Daniel Kahneman argue, people ‘aren’t rational, they rationalise’ a story for their actions after emotions and cognitive shortcuts make a snap decision.

A way around this problem is to examine how people’s views alter according to the ethnic makeup of their locale and wider area. This imparts a contextual effect on their immigration and voting behaviour which may tell us more than their answers to survey questions. Using the Citizenship Surveys and the Understanding Society survey for the period 2007-12, Gareth Harris and I find that White British people living in wards with rapid increases in ethnic minorities during 2001-11 are significantly more hostile to immigration and more likely to vote for the BNP. The same is not true of those who live in places with a rapid upsurge in European population.

White British respondents seem sensitive to the share of non-European minorities in both positive and negative ways. More ethnic minorities in the locale produces a rosier view of immigration and lowers BNP voting. This is partly because of positive contact with ethnic minorities, but also due to a general habituation to the local presence of minorities. The presence of European immigrants has no such effect. Likewise, the share of minorities in people’s Local Authority, a larger geographic unit of 100-200,000 people, tends to increase opposition to immigration. Again, the share of Europeans makes no difference.

Anti-prejudice norms account for the reluctance of many to vote for the far right even when they share the BNP’s views on immigration. This also conditions the way people express their opposition to immigration – stressing European rather than non-European migrants, economic over cultural motivations. An example of how the anti-prejudice norm displaces cultural concerns into the economic sphere comes from an older woman in one of our four focus groups in London and Birmingham who commented that, coming in on the Croydon tramlink, ‘I might have been the only English person on that tram… I didn’t like it… I could have been in a foreign country.’ Challenged by another participant, ‘Why should that affect you [if] there’s minorities on the train,’ the woman swiftly changed course to favour a more acceptable argument: ‘It doesn’t affect me. It, um… I’ve got grandchildren and children… I don’t think things are going to get any better or easier for them, to get work.’

Assimilation mitigates ethnic change: a significant number of European immigrants shift to White British identity over time. In the ONS Longitudinal Study, the number of people who changed ethnicity to tick the White British box between 2001 and 2011, net of those going the other way, was 7 per cent among the White Other (mainly European) group, higher even than among White Irish.

The children of European immigrants tend to become White British, reducing their longer-term cultural impact. This is clear in the case of children of earlier waves of European immigration such as Michael Howard or Ed Miliband. Indeed, two-thirds of Jews ticked the White British box on the census with fewer than a third opting for White Other. In Understanding Society, around 30 per cent of those who said their parents were of European, non-British ethnicity identify as White British, while the reverse flow – from British parents to European kids – is just 6 per cent. Assimilation is part of the reason the White British are a larger share of the under-20s than the 20-40s.

The White British have no traditional impulse to oppose categories of European immigrant, as with Greece and its Albanians. European immigrants have a history of assimilation in Britain whereas memories of ethnic conflict have typically pitted White British against postwar non-European groups. Non-European absorption into the ethnic majority has been much more protracted, requiring intermarriage, as exemplified by the Afro-Caribbeans. White British identity is not open to non-Europeans apart from those of mixed race background.

On this reading, a hidden driver of anti-immigration sentiment in Britain is the doubling of the country’s ethnic minority population between 2001-11, caused not so much by immigration as a young minority age structure and natural increase. Nigel Farage speaks in favour of free trade, globalisation and an Australian-style points system of immigration. But if Farage turns off the European migration tap to favour a high-skill flow from outside, this could hasten the ethnic change which dismays its supporters. Ironically, UKIP’s Euroscepticism could prove an own-goal.

Note: This article originally appeared at our sister site, British Politics and Policy at LSE, and gives the views of the author, and not the position of EUROPP – European Politics and Policy, nor of the London School of Economics. Feature image credit: UK Home Office

Eric Kaufmann – Birkbeck College, University of London
Eric Kaufmann is Professor of Politics at Birkbeck College, University of London. He is the author of Shall the Religious Inherit the Earth (Profile 2010), The Rise and Fall of Anglo-America (Harvard 2004), The Orange Order (Oxford 2007) and Unionism and Orangeism in Northern Ireland since 1945 – with H. Patterson (Manchester 2007). His current ESRC grant, affiliated with the think tank Demos, examines white working-class responses to diversity in the UK. His Demos report on the White British Response to Ethnic Change will be published in June. He may be found on twitter: @epkaufm 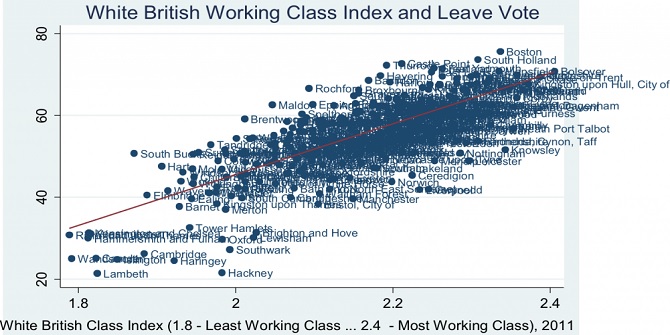