Turkey’s potential accession to the European Union has been a controversial issue in several EU states. Rachid Azrout presents findings from a study on the role that contact with Turkish immigrants plays in shaping attitudes toward Turkey’s membership of the EU. He writes that countries with higher numbers of Turkish immigrants are generally less supportive of Turkey’s membership. However the effect that anti-immigrant sentiments have on support varies significantly depending on the importance attached to immigration by political parties. This highlights that contact with immigrants is often indirect and that opinions are strongly influenced by the stance of the media and political actors.

Gordon Allport, writing in the 1950s, famously argued that contact between groups of people from different backgrounds is likely to reduce prejudice between these groups. This positive effect of contact was expected when contact was meaningful (e.g. when there was cooperation toward a common goal); however, in a situation of less favourable conditions, such as perceived competition for scarce resources, intergroup contact might lead to increased prejudice and tension. Can this perspective offer insights on public attitudes toward Turkey’s potential EU membership?

Together with Joost van Spanje and Claes de Vreese, I have looked at how contact might affect support for Turkey’s potential accession in two ways. First, we focused on the main effect of contact: how does the presence of Turkish immigrants in a country affect support for Turkey’s EU membership? In most societies, immigrants and native citizens often lack meaningful relations. They often live in separate areas, work in separate sectors and participate in separate social environments. Thus, according to the argument above, their presence is likely to increase prejudice. And in the case of Turkey’s potential accession, we indeed found that a larger share of Turkish immigrants in a country leads to less support for Turkey’s EU membership in that country.

The overall spread of attitudes toward Turkish accession is shown in Chart 1 below, based on a survey in which respondents were asked to indicate how they felt about the issue on a scale from 1 (strongly against) to 7 (strongly in favour). 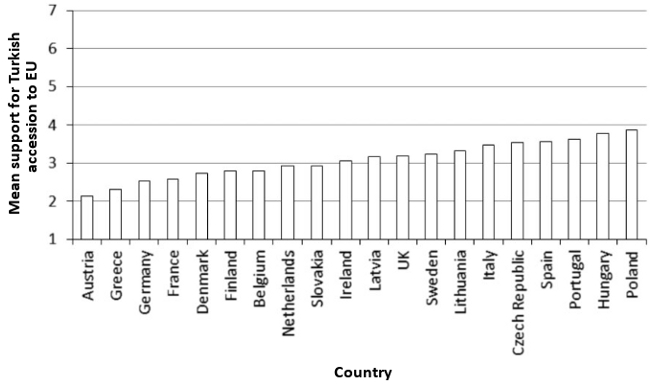 Second, we focused on how contact might influence the effect of the strongest predictor of support for Turkey’s membership: anti-immigrant attitudes (see Marijn van Klingeren and Hajo Boomgaarden’s earlier EUROPP article for a further discussion of this topic). However to understand how contact might influence this effect, we first need to discuss how this effect works.

In a previous study, we tested a three-step model to explain the effect. First, building on social identity theory, it can be stated that the anti-immigrant attitudes of individuals toward specific groups are not of primary importance; rather the important thing from an academic perspective is to use a collection of evaluations of immigrants to measure the general tendency of individuals to categorise people from particular groups.

Second, since issues regarding the EU involve cooperation with people who differ in their language, religion and ethnicity, individuals with negative attitudes towards immigrants are likely to categorise other Europeans as part of the ‘out-group’. Third, social identity theory explains that this out-group will be more negatively evaluated, in our case by denying support for their EU membership.

This explanation of how anti-immigrant attitudes affect support for Turkey’s EU membership is based on the idea that an individual ‘frames’ the issue in terms of in-group versus out-group. This depends, however, on whether an individual is aware of these considerations and is able to recall them. And of course, where there is a high level of contact between different groups of people, this type of framing is likely to be more common in the minds of individuals. Therefore the presence of Turkish immigrants in a particular country leads to these anti-immigrant attitudes having a stronger effect.

Chart 2: Relationship between the importance attached to immigration by political parties and effect of anti-immigrant attitudes on support for Turkish EU membership 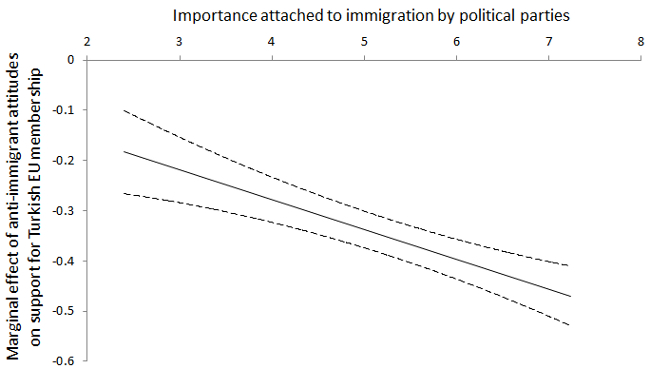 Note: The chart shows how the impact of anti-immigrant attitudes on support for Turkish EU membership changes depending on the importance attached to immigration by political parties in a particular country. The vertical axis indicates the margin of change caused by anti-immigrant attitudes, with the solid line showing how this causes a greater negative effect as the importance attached to immigration (shown in the horizontal axis) increases. The dotted lines around the solid line are 95 per cent confidence intervals.

With the political parties indicator we could explain about 50 per cent of the variation in the effect between countries. This illustrates the importance of indirect contact. Moreover, were these findings to be hypothetically extended outside the range of observations shown above, the model would predict that if political parties attributed no importance to the immigration issue at all, the effect of anti-immigrant attitudes on support for Turkish EU membership would be very close (and not significantly different from) zero.

Does this illustrate the ultimate power of political elites in shaping citizens attitudes? Not quite, as there was no evidence of a direct main effect of indirect contact. However it does show that citizens take strong cues from political elites in terms of how they interpret such issues and that elites guide the criteria by which citizens form their opinion.

On a final note, this cueing effect is most likely not limited to the issue of Turkey’s EU membership. Of course, as Turks differ from most other Europeans by language, ethnicity and religion, the in-group versus out-group frame is likely to be applicable. But the frame is also applicable to a much larger range of issues in the EU. Contact with immigrants is perhaps not likely to influence those other issues, but indirect contact is likely to influence how we frame a much larger variety of debates.

For a longer discussion of this topic, see the author’s paper in the International Journal of Public Opinion Research

Note: This article gives the views of the author, and not the position of EUROPP – European Politics and Policy, nor of the London School of Economics. Featured image credit: Quinn Dombrowski (CC-BY-SA-3.0)